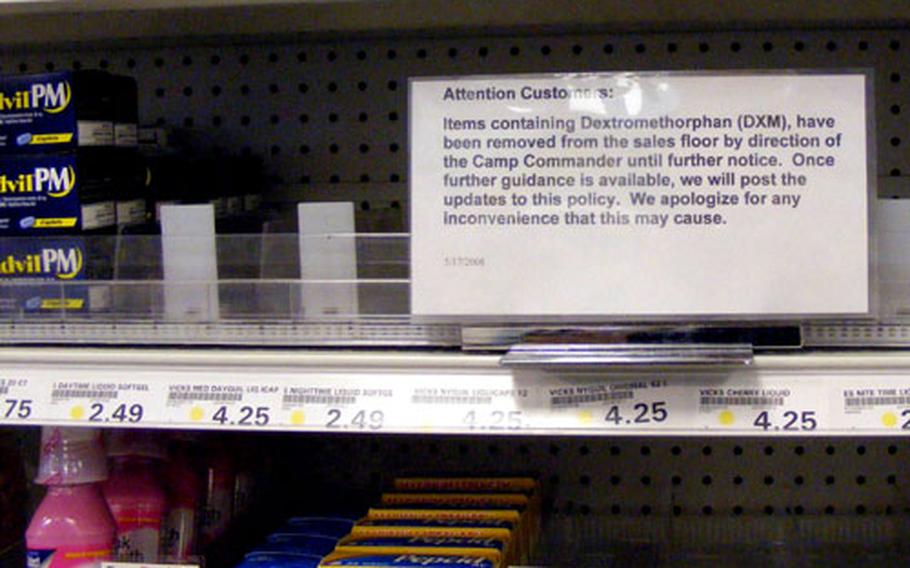 Over-the-counter cough and cold medicines containing a drug that can be misused to create hallucinatory effects have been banned from the shelves of shoppettes, exchanges and commissaries on Marine bases in Japan. (David Allen / S&S)

Greeting them instead are notices that all over-the-counter medications containing DXM, or dextromethorphan, have been removed for now.

"Once further guidance is available, we will post the updates to this policy," the notice says. "We apologize for any inconvenience that this may cause."

Dextromethorphan is used in more than 140 over-the-counter cough and cold medicines. Taken in large doses, it produces an effect similar to an LSD trip. And the trips can turn bad. The U.S. Food and Drug Administration warns that overdosing on DXM-based cough suppressants can cause brain damage, seizures, loss of consciousness and irregular heartbeats.

The order was issued May 17. It covered all Army and Air Force Exchange Service outlets on Camps Foster and Lester and the Plaza Housing Area. The products also were pulled from the shelves of the Camp Foster commissary.

"This all came about at the request of the Marine leadership amid problems with students at Kubasaki High School," said Erika Pfauntsch, manager of the main exchange on Kadena Air Base.

She said a task force called KATCH &#8212; Keep All Teenage Children Healthy &#8212; was formed with representatives from all the services, AAFES, Department of Defense Dependents Schools, the Defense Commissary Agency and health services.

The cold products continue to be sold on a controlled basis, but they are available at only one AAFES outlet on each base on Okinawa.

"Mainland Japan AAFES locations have not been directed to remove any products from the shelves," Potter said.

"Our understanding is that it was for 30 days, while a long-term policy is developed," said Foster commissary director John Zaher.

Other commissaries on Okinawa are keeping DXM medications behind the counter.

"A customer who wants to purchase one of the items needs to go to customer service and present proof that they are over 18 years of age," a commissary official at Kadena Air Base said. "And then we only sell one package per customer."

Sales are also limited at the Kadena main exchange.

Since January 2006, the sale of products with the cough-suppressing ingredient has been limited to adults at AAFES stores worldwide. The restriction is also in effect at all Navy Exchanges in Japan.

At Yokosuka Naval Base, for example, the items are emblazoned with orange "DXM" stickers, and a sign warns customers that they need to be at least 18 to purchase these items, said Navy Exchange retail manager Rusti Rausch.

Cashiers have pictures of DXM products at the register for easy identification, she said.

"The orange stickers and the pictures let the cashier know to verify age &#8212; just like we do for cigarettes," Rausch said. "The signs posted in the aisles let our customers know what to expect."

Stars and Stripes reporter Allison Batdorff contributed to this report.