COLA to the rescue? In England, not exactly 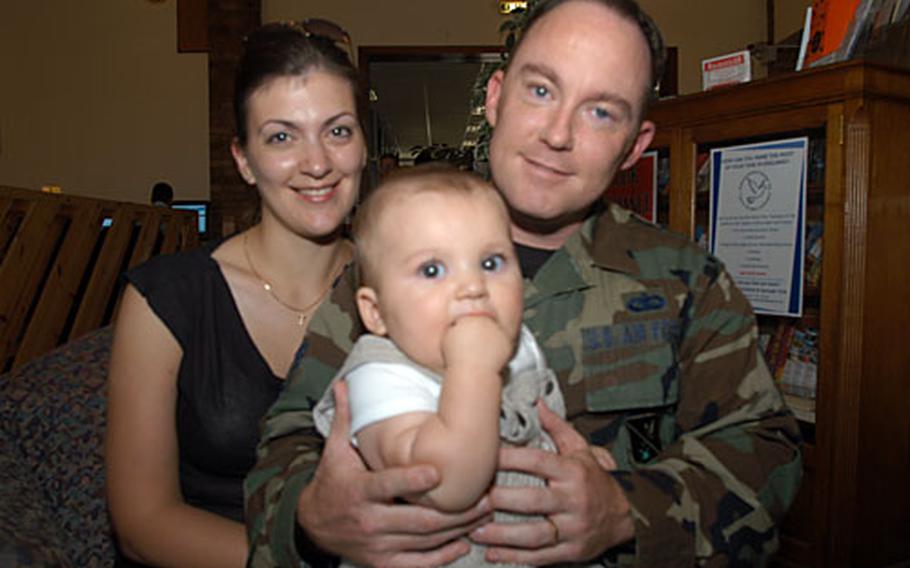 Tech. Sgt. Dan Ostrom and his wife, Sandra Ostrom, sit with their 6-month-old son, Justin. The exchange rate has caused the Ostroms to cut back since they arrived in England from McGuire Air Force Base in New Jersey in June. (Russ Rizzo / S&S)

Tech. Sgt. Dan Ostrom and his wife, Sandra Ostrom, sit with their 6-month-old son, Justin. The exchange rate has caused the Ostroms to cut back since they arrived in England from McGuire Air Force Base in New Jersey in June. (Russ Rizzo / S&S) 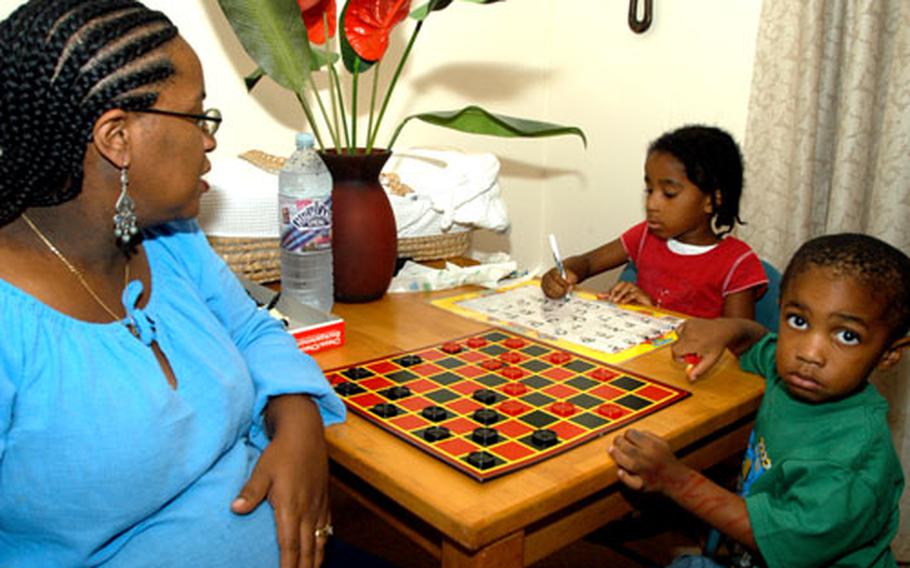 Carla Gordon plays checkers with her son Donovan, 3, while her daughter Jasmari, 6, practices her penmanship at their house in Ely. Monthly bills can be a concern when converting to British currency. “It just starts adding up when you’re dealing with pounds and the exchange rate,” said Gordon, wife of Senior Airman Gregory Gordon, who works in the 100th Logistics Readiness Squadron at RAF Mildenhall. (Russ Rizzo / S&S)

RAF MILDENHALL &#8212; Living in England is expensive for airmen paid in U.S. dollars. But the government has a fix, called the cost of living allowance, that solves all their financial problems. Right?

Blevins acts as a liaison between U.S. bases in England and the Department of Defense officials who calculate COLA rates. He said the biggest misconception about COLA is that it was designed to eliminate the financial impact of living overseas.

Instead, Blevins said, COLA is designed to ease the burden of living abroad, partially compensating airmen for extra costs associated with a weak dollar and expenses such as road taxes that they do not have at home.

So it shouldn&#8217;t come as a surprise that the extra few hundred dollars in airmen&#8217;s paychecks is not enough to pay for weekly trips to Scotland or regular nights on the town, Blevins said.

Some servicemembers and spouses said they came to England expecting COLA to offset more of the cost of living abroad than it does.

&#8220;I was under the impression that it was supposed to even the playing field [between living in the States and England], but I don&#8217;t think it does,&#8221; said Shannon Luina, whose husband is a Department of Defense civilian working at RAF Mildenhall.

Others said they were happy for any help they could get.

The Department of Defense conducts a survey to determine shopping habits of airmen and their families and uses it to determine COLA levels. So, if surveys indicate that people are mostly shopping on base, then COLA rates will be lower than they would be if people shopped on the economy, paying nearly twice the price for groceries, Blevins said.

That could explain why COLA rates in parts of Italy and Germany, economies tied to the weaker euro, are higher than parts of England, Blevins said.

While he disputes the notion that airmen in England are not paid enough COLA, Blevins said another common gripe about the system is accurate.

When the exchange rate takes a sharp increase, it does take awhile for COLA to catch up, he said.

That&#8217;s because the committee that controls COLA reviews exchange rates every 15 days and then takes a week to approve recommendations. So if the exchange rate increases sharply after a review, it could take as long as three weeks for COLA to catch up, Blevins said.

The formula works the other way, too. When the dollar gains on the pound, COLA is slow to go down, Blevins said.