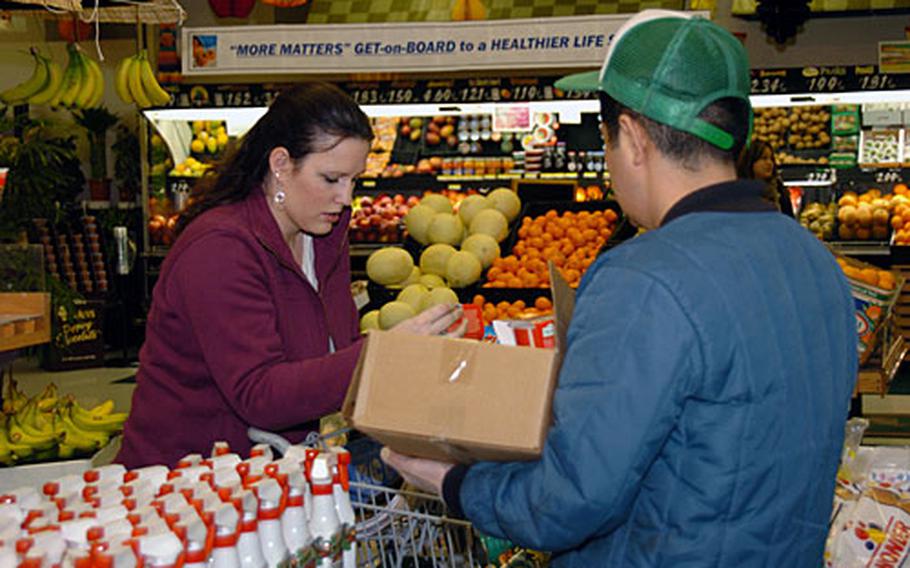 Katie McNett, a dependent on Yokota Air Base shops in the commissary for items found on base that are lower priced than off base . (Christopher B. Stoltz / S&S)

YOKOTA AIR BASE, Japan &#8212; People who think their cost of living allowance should be higher will soon have a chance to do something about it.

A Living Pattern Survey will be conducted in March in which servicemembers stationed in Japan and on Okinawa will be asked what types of items they purchase off base and from what stores.

Officials have yet to announce the dates the online survey will run.

COLA is a supplement designed to offset the higher prices of goods and services overseas and help servicemembers&#8217; purchasing power equate with what they would have in the States.

&#8220;The COLA index is highly dependent on the proportion of shopping done in on-base facilities,&#8221; the Department of Defense COLA Web site says. &#8220;In general, the higher the proportion of on-base shopping, the lower the index.&#8221;

Because the LPS is conducted only every three years, commands are emphasizing the importance of filling out the survey.

&#8220;You have the opportunity to affect your COLA rates for the next three years,&#8221; said Capt. Chris Watt, a spokesman for the 374th Airlift Wing at Yokota.

For Brian Huber, an airman stationed aboard the aircraft carrier USS Kitty Hawk out of Yokosuka Naval Base, the upcoming COLA survey is important.

Huber would like to see COLA increase but said he hasn&#8217;t paid close attention to it.

The current COLA rates for servicemembers in Japan are some of the lowest in recent years, as rising consumer prices in the States combined with a weakened dollar overseas.

&#8220;The whole point of COLA is to put everyone on a level playing field,&#8221; said Lt. Col. Loren Darmofal, a financial management officer for U.S. Forces Japan.

As the dollar gains against the yen, COLA diminishes.

Katie McNett, a dependent on Yokota, said she hopes this survey will help get some of that buying power back.

The recent changes haven&#8217;t been enough to make a much of a difference in Crockton&#8217;s spending habits.

He added that he really didn&#8217;t know if the COLA rate was appropriate but he wouldn&#8217;t mind a couple extra dollars.

Stars and Stripes reporters Chris Fowler, Jennifer Svan and Christopher B. Stoltz contributed to this story.

How the COLA index is determined

The goal behind providing COLA rates to servicemembers overseas is to balance out their purchasing power with that of their counterparts back in the States.

But figuring out just exactly how these rates are determined can be a little tricky.

The COLA index determines how much money servicemembers receive, varying depending on rank, length of service, number of dependents and where they are stationed.

&#8220;COLA is paid as percentage of spendable income. An index of 110 would result in an annual COLA of 10 percent of the spendable income corresponding to the member&#8217;s grade, years of service, and family size,&#8221; according to the Department of Defense COLA Web site.

Servicemembers living in barracks or dorms receive 47 percent of the COLA index.

To determine the index for a specific overseas base, the DOD compares stateside shopping behavior with that of each installation.

The information is gathered through two types of surveys: the Living Pattern Survey and the market basket price survey, or Retail Price Survey.

The LPS is conducted every three years and asks servicemembers what off-base stores they shop in and what percentage of their shopping they do on base at the commissary and exchange.

Using information from the LPS, price collectors in many overseas locations conduct a retail price survey each year, pricing about 120 goods and services, the Web site says.

Knowing how much commonly purchased items cost and what percentages of these items are bought off base, the DOD calculates a COLA rate for that specific base.

An example on the Web site says a Living Pattern Survey may show that servicemembers at one installation typically buy half their clothing in local stores with foreign currency and half at the exchange with U.S. dollars.

&#8220;The prices from each overseas survey are compared with prices in the U.S. for equivalent goods and services at the same point in time,&#8221; the Web site explains. &#8220;If the overseas market basket cost is greater than the U.S. cost, a COLA is paid.&#8221;

For more information or to calculate COLA rates, click here.