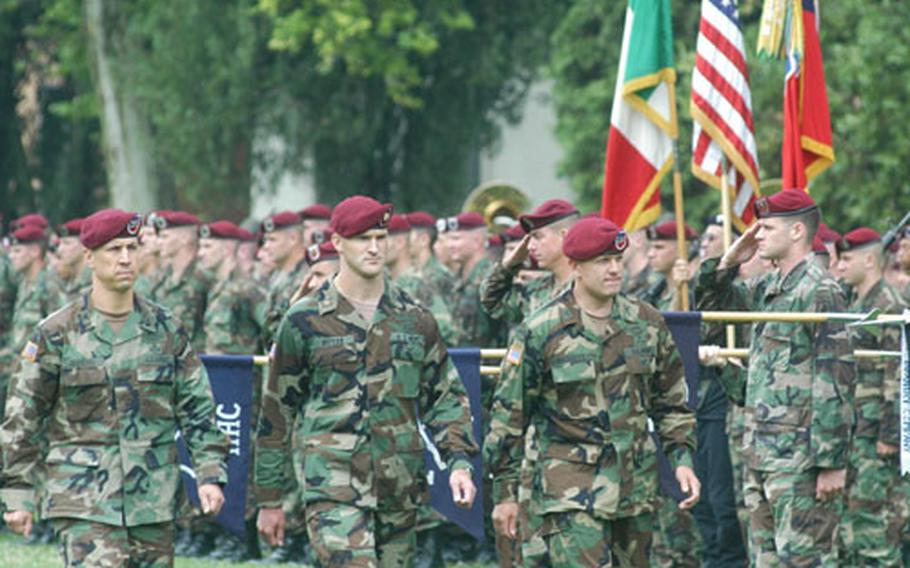 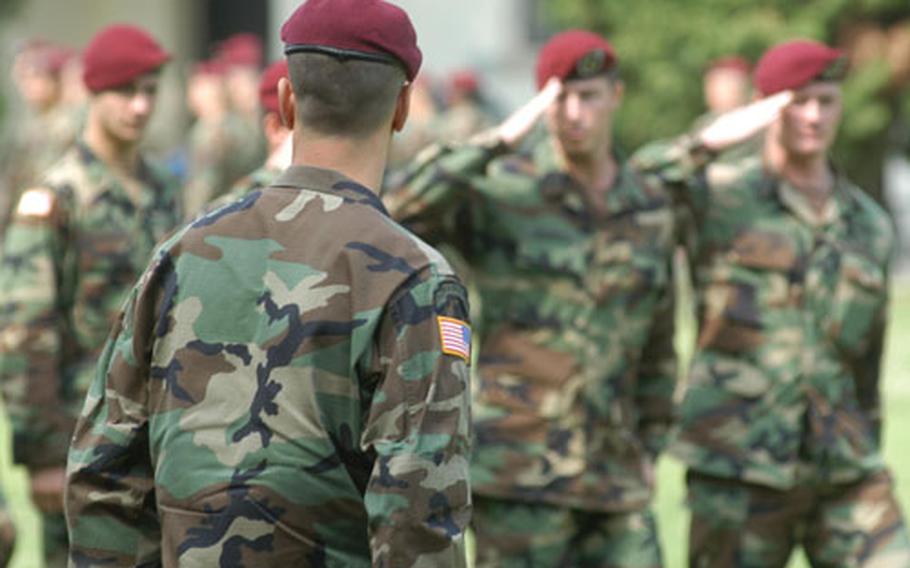 Col. Kevin Owens, the new commander of the 173rd Airborne Brigade, reviews soldiers as they march past him during the change-of-command ceremony Friday at Caserma Ederle in Vicenza, Italy. (Kent Harris / S&S)

VICENZA, Italy &#8212; It&#8217;s been an eventful two years for the Sky Soldiers and their commander, Col. Bill Mayville.

That association officially came to an end Friday as Col. Kevin Owens assumed command of the 173rd Airborne Brigade in a ceremony at Caserma Ederle.

&#8220;A lot has happened in the two years since I last stood face-to-face with the brigade on this parade field,&#8221; Mayville said.

Most notably, the brigade spent almost a year in Iraq, with 1,000 members parachuting into the country in one of the largest American combat jumps since World War II.

Elements from the brigade also participated in nearly two dozen deployments during that span, including two airborne operations in Kosovo.

Those forces were put to the test in northern Iraq, where the brigade was largely on its own during the conflict while the bulk of American forces zoomed toward Baghdad from the south.

Since the brigade returned, about 30 percent of its strength has turned over, with just about all the leadership positions changing hands. That now includes Mayville, who will move across the base and take on duties as chief of staff for the Southern European Task Force (Airborne).

Owens moves from those offices to take over the brigade. He&#8217;s served as director of operations for SETAF for the last year. Before that, he lead a group of Rangers in Afghanistan.

He thanked Mayville for handing over &#8220;what is, without question, the finest brigade in the United States Army.&#8221;

Owens said the brigade has been busy under Mayville&#8217;s command, but soldiers shouldn&#8217;t expect to let up any time soon. Brig. Gen. Jason Kamiya, the SETAF commander, said the brigade had &#8220;probably set an Army record&#8221; for deployments recently.

Mayville talked of moments from several of those deployments in his farewell remarks, including a promise he made to a wounded soldier in Iraq that he would remain on jump status &#8220;when I knew he would probably never stand on his own two feet again.&#8221;

He read off the names of the nine soldiers from the brigade who died in Iraq and said: &#8220;I will always remember the names and faces of the soldiers we did not bring home.&#8221;