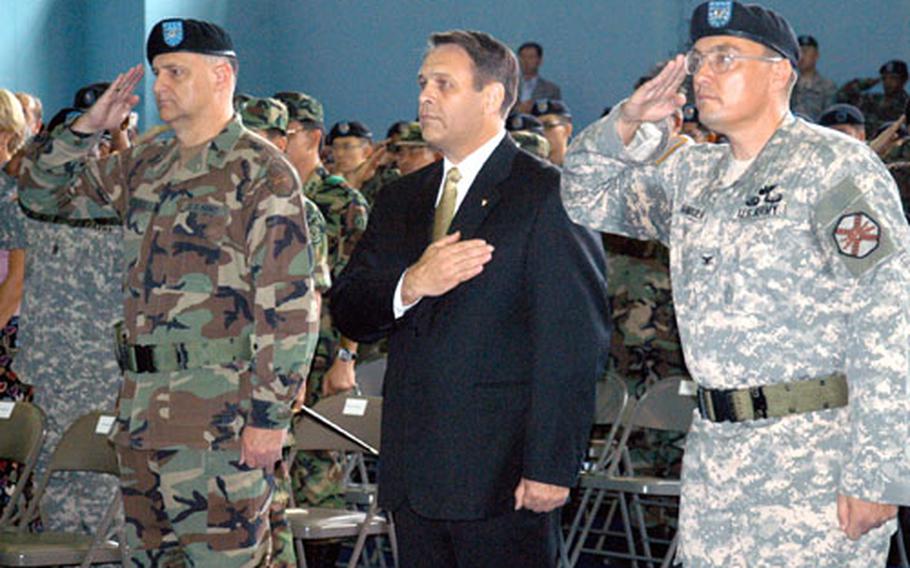 The command puts him in charge of the unit that manages U.S. Army installations in South Korea&#8217;s Daegu-Busan region.

He replaces Col. Donald J. Hendrix, who is retiring after 28 years in the Army. Hendrix had been Area IV commander since August 2004.

Dumoulin, a West Point graduate who served in field artillery before transferring to the aviation branch, took command during a ceremony inside Camp Walker&#8217;s Kelly Gym.

His previous assignment was with the Installation Management Agency in Arlington, Va., where he served in the operations division as head of the mission support branch.

During Thursday&#8217;s ceremony, Hendrix drew praise for &#8220;exceptional leadership&#8221; from Davis D. Tindoll Jr., director of the Installation Management Agency-Korea Region Office, of which the support activity is a part.

Among Hendrix&#8217;s successes Tindoll cited was building, converting and renovating facilities at Camp Carroll in Waegwan; closing Camp Hialeah in Busan; developing an agreement with the U.S. Navy to support Army activities that will continue in Busan at Pier 8 and the Pusan Storage Facility; and supporting a Patriot missile battalion at Gwangju Air Base.