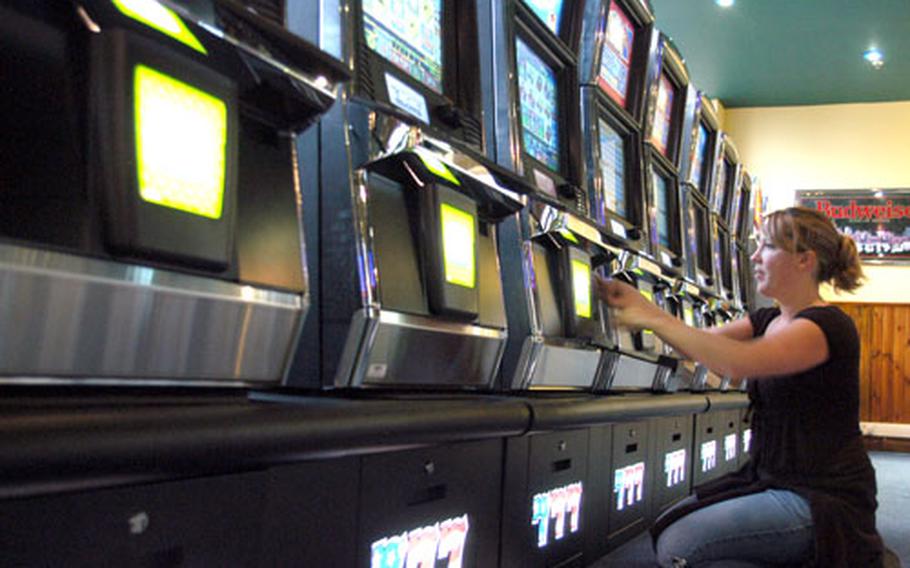 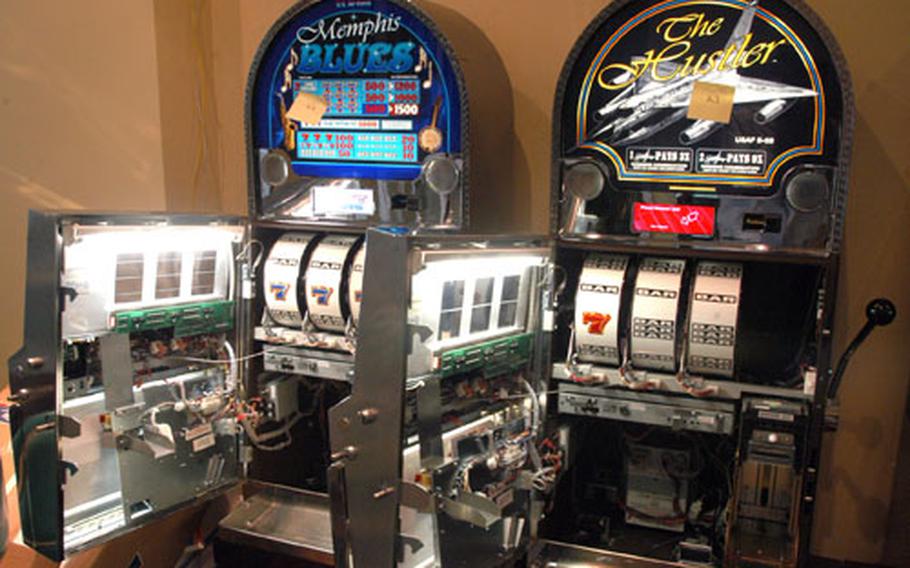 Gamblers now can lose money or hit that long-awaited jackpot more quickly thanks to coinless slot machines being installed on U.S. bases across the United Kingdom.

No longer will gamblers need coins to play &#8212; nor will they hear the clink of coins being paid out.

To play now, they will go to an electronic cash machine to obtain a free betting card.

Then they insert the card along with dollar bills &#8212; in denominations up to $20 &#8212; into the new slots in order to obtain gambling credits. The card can be used on more than one slot machine and be kept to use another day, if a gambler decides not to cash in.

Gamblers will be able to bet faster and more easily, not having to deposit coin after coin.

Any leftover money and winnings can be redeemed by inserting the card back in the cash machines.

Fair hopes the slots will spark renewed interest among gamblers at Lakenheath, where the machines generated about $900,000 in fiscal 2006, down from $1.1 million in fiscal 2005.

Steven Parker, chief of business operations for the 48th Services Squadron, believes the drop in slots revenue on Lakenheath stemmed from deployments and other personnel changes.

Lakenheath has more slots than any other base in the U.K. The base had 72 coinless slots installed as of late October.

A few miles down the road, at RAF Mildenhall, slots revenue in fiscal 2006 was down more than $150,000 from the previous year.

Other bases saw decreases as well.

Apart from eliminating the need for some casino employees, including the ones who make change, it makes a difference psychologically when gamblers can bet with credits instead of currency, according to gambling writer Bill Burton on About.com.

A gambler is more likely to spend the last dollar or two of credit on a coinless slot than cash out, Burton says.

Staff Sgt. Dante Reese, a life support trainer for the 351st Air Refueling Squadron on Mildenhall, says a gambler, for the most part, will not cash out for one or two dollars.

&#8220;Because in reality, what are you going to do with a few dollars?&#8221; said the 30-year-old from Los Angeles as he betted credits on a slot at the Galaxy Club.

The new slots also allow gamblers to walk away with at least their pocket change, since the slots don&#8217;t take coins for betting card deposits.

Parker praised the versatility of the new slots, saying that they allow people to play six or even eight different games on one machine.

Money made by slot machines directly benefits local base communities and the Air Force, officials said.

Much of the revenue is funneled back into the bases through various events, programs and projects.

At Mildenhall, about half of gambling proceeds go toward nonappropriated funds, which financed the construction of the new bowling center, outdoor recreation center and the Galaxy Club, where many of the base&#8217;s slots are now located, said base spokesman Capt. Jamie Humphries.

Other bases use their share of the gambling portions in similar ways. The rest of each base&#8217;s earnings, about 50 percent, are given to the Air Force Services Agency in San Antonio. The agency uses the revenue to fund service projects, such as construction and renovations, throughout the world, among other things.

Source: Figures provided by each base

Getting help for a gambling addiction

People who want help with gambling addiction can turn to the Lakenheath hospital, said base spokesman Senior Airman Wes Auldridge.

The Air Force’s Alcohol and Drug Abuse Prevention and Treatment program was designed for substance abuse. But the program can provide counseling, education and treatment for other addictions.

The Lakenheath hospital treats gambling addictions on base or off, Auldridge said.

He was unable to say how many, if any, personnel used the program for gambling-related reasons.