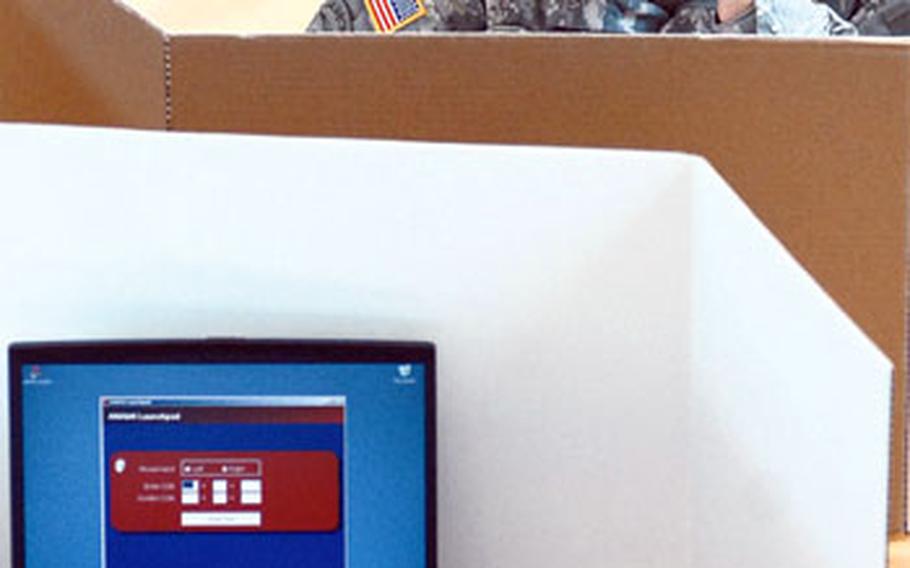 Soldiers deploying from Europe will now be required to take a cognition test that establishes a baseline measurement in case they experience a traumatic brain injury while deployed.

The Automated Neuropsychological Assessment Metrics is a computerized exam that takes about 20 minutes to complete and puts soldiers through some mental gymnastics that measure reaction times, short-term memory and doing math.

Traumatic brain injury is a blow or jolt to the head or a penetrating head injury that disrupts the function of the brain. Severity ranges from mild &#8212; a brief change in mental status or consciousness &#8212; to severe, including an extended period of unconsciousness or amnesia. Mild TBI is synonymous with a concussion and has been labeled the signature injury of the Iraq and Afghanistan wars.

"If somebody has that kind of experience, we would wait 24 to 48 hours and then administer the ANAM again just as a way of measuring any changes," said Maria Crane, Europe Regional Medical Command&#8217;s traumatic brain injury program manager. "If there are, it would trigger referral to the primary care doctors or the psychologist or neuropsychologist downrange to take a look at that."

Earlier this year, the Army made the test mandatory for all deploying soldiers. However, it is not mandatory that soldiers take the test again when they redeploy.

Upon redeployment, only soldiers who have been identified as experiencing a blast-injury downrange or given the Military Acute Concussion Evaluation downrange would have to take the ANAM when they arrive home.

Crane stressed that the ANAM is a screening tool and not a diagnostic exam.

"With the areas of cognitive performance we&#8217;re measuring, they could not do as well on it because they&#8217;re tired, because they have (post-traumatic stress disorder) or because they have other things going on," she said. "We really can&#8217;t make that jump and say that the ANAM is worse now because six months ago you had a TBI. All we could do is say, &#8216;They didn&#8217;t perform very well on the ANAM so that means we should do further assessment.&#8217; "

In response to the 2007 National Defense Authorization Act requirement for pre-and post-deployment screening for TBI, the Department of Defense has added TBI screening questions to the post-deployment health assessment, and in July required screening of all servicemembers for mild TBI prior to deployment, according to a 2008 Government Accountability Office report.

Even before the ANAM test became mandatory, hundreds of soldiers stationed in Europe had already taken it. In August 2007, roughly 1,200 soldiers deploying with the 1st Armored Division headquarter in Wiesbaden, Germany, took the ANAM test as part of their pre-deployment process.

A six-person ANAM team from Europe Regional Medical Command will travel to communities where units are deploying and administer the ANAM to the soldiers, Crane said.

"I would just tell soldiers to take care of themselves by seeking the help that they need," she said. "Most of the time, treatment is very simple, very effective and there&#8217;s no loss of anything &#8212; no loss of home leave, no loss of career. It really is to help keep our soldiers healthy and functioning to the best of their abilities."