Cobra Gold planning postponed; no decision made on US participation TOKYO — The United States has indefinitely postponed a planning meeting with Thailand for next year’s Cobra Gold exercise, a decision that comes months after the U.S. scaled down its part in one of the world’s largest multinational military events.

The postponement of the planned March meeting in Hawaii also comes as the U.S. evaluates its relationship with Thailand, a longtime, steadfast security ally that has shown little sign of returning to democracy since a May 2014 military coup.

“No decisions have been made regarding the 2016 iteration of Cobra Gold,” according to a statement issued by the U.S. Embassy in Bangkok and the U.S. Pacific Command. “Decisions concerning the exercise will be made over the course of the next months in consultations with Thailand, the co-host of the exercise, and other participating countries.”

Cobra Gold, which normally combines combat exercises with humanitarian assistance and disaster response, has served for decades as a foundation for U.S. military relations with the region’s other powers.

The U.S. military values its access to Thailand’s well-developed airfields and bases, which give its forces a stable staging point for operations in Southeast Asia. Meanwhile, the Thai military has gained valuable access to U.S. tactics and procedures.

The Thai military is moving ahead under the expectation that the exercise will proceed in 2016. Officials still expect a meeting in Thailand, which is generally held in the summer.

Exercise planners are standing by to hear about any potential rescheduling of the Hawaii meeting.

“We’re waiting for a letter from the U.S. government on that,” Thai defense spokeswoman Capt. Arada Youdlad said in a phone interview.

In 2014 before the coup, more than 13,000 servicemembers from the U.S., Thailand, and four other countries participated, while about 20 other nations sent staff observers. In February, the U.S. scaled down its presence and declined to participate in combat exercises, as State Department officials cited concerns about Thailand’s political situation.

On Thursday, State Department officials called Thailand “a valued friend and ally,” but again raised questions about the government’s crackdown on democratic freedoms.

“We continue to urge the interim government to end the practice of trying civilians in military courts, remove undue restrictions on freedom of speech and peaceful assembly, institute a genuinely inclusive reform process that reflects the broad diversity of views within the country, and return the country to democracy,” according to an embassy statement.

Thai government head Prayuth Chan-ocha declared an end to martial law on April 1, but then invoked an article of the interim constitution that grants him sweeping veto authority over laws, in the name of national security, according to The Associated Press.

“Article 44 will be exercised constructively,” Prayuth told AP earlier this month. “Don’t worry, if you’re not doing anything wrong, there’s no need to be afraid.”

Prayuth said last year that democratic elections would be held this year but has since pushed the timetable to sometime in 2016.

In 2006, the Thai military ousted his brother, Thaksin, whose strongest support came from the country’s less affluent provinces. 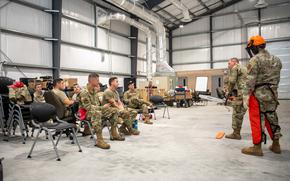