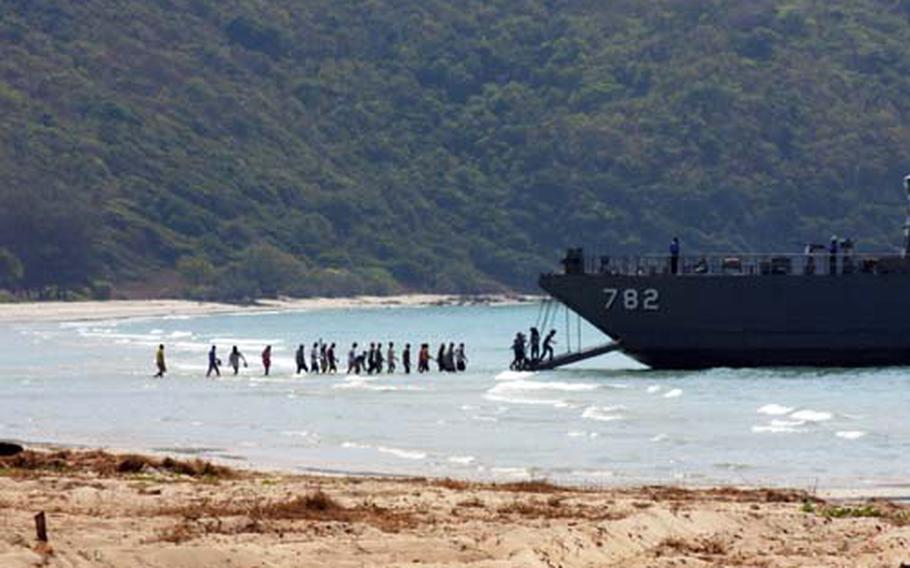 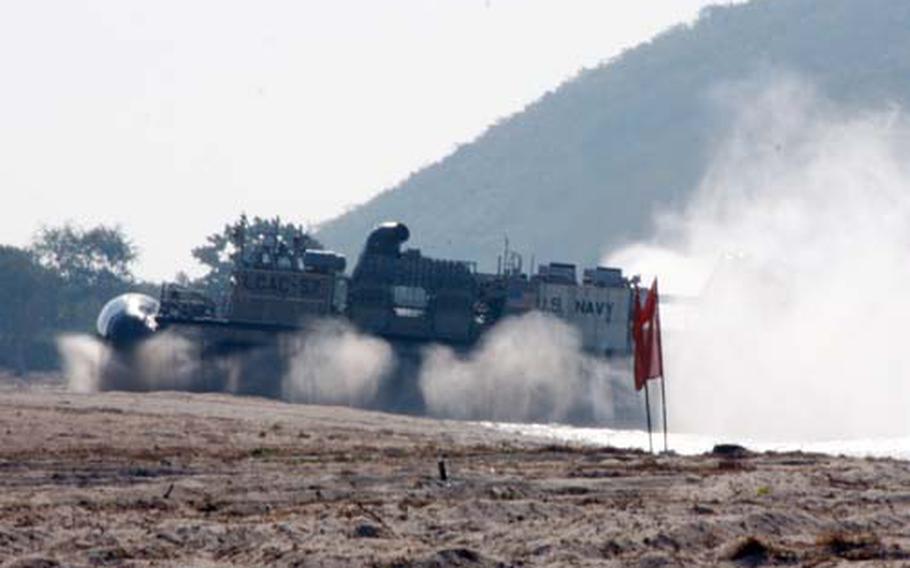 Editor&#8217;s note: Stars and Stripes reporter Kevin Baron accompanied U.S. servicemembers throughout Thailand to capture the Cobra Gold experience. This is Part II of his wrap-up.

In a rural road in the hot, dry countryside of Thailand, a dozen protesters shout, "No! No! No!"

Using only a fallen tree and their bodies, they face off against a wall of elbow-linked Thai soldiers tasked to escort a World Food Programme convoy of food, water and supplies to a humanitarian distribution encampment.

It is almost believable.

The protesters are Asian troops in civilian clothes and locally hired role players. As a Royal Thai Army negotiator speaks calmly to the crowd leader, several try to dash through the security line. A few are tackled hard to the pavement. Others lay prone on the middle of the road, moaning in pretend agony.

It has taken weeks for these combined teams to prepare for this Global Peacekeeping Operations Initiative. Only six U.S. noncommissioned officers are here, with a handful of U.N. advisers. Their job is to train the trainers in foreign militaries.

"They&#8217;re just there to help the students," said Command Sgt. Maj. Michael Thomas, a training designer who was commandant of the NCO Academy-Hawaii. The idea of junior ranks giving orders remains a big cultural leap in Asian militaries that draw a hard line between officers and enlisted men.

In this scenario, the WFP wants no military onboard its vehicles. But Asian armed forces are used to being in charge of aid convoys, Thomas explained. It&#8217;s a challenge these trainees will face in the real world, where militaries frequently have to negotiate how far to keep away from aid vehicles.

At a barbed-wired encampment farther down the road, ex-combatants have come to lay down their arms and return to society. An English-speaking Thai soldier beckons a civilian woman to rise from her knees and pass the gate. Inside, a man holding a cardboard TV news camera tries to record a detainee processing, which is not allowed. A Thai soldier pushes him back firmly but politely.

Suddenly, the bang of a flash grenade pierces the quiet and a speeding white pickup truck drives by, rebels firing blanks from automatic weapons. Thais hit the dirt, green smoke fills the air, and the soldiers return fire.

"The hard part is always reintegration," Mixon said, and setting up what amounts to vocational training.

When a combatant lays down his arms, "you have to house the family, you&#8217;ve got to feed them &#8212; it takes maybe a year or more to get them some kind of skill. Well, that&#8217;s a huge investment," he said. A political decision has to be made, "whether you&#8217;re going to fight these guys for 40 years or reintegrate them into society."

Political decisions are on Mixon&#8217;s mind often, 8,000 miles from the Pentagon; particularly, those that will direct the coming shift in fighting to the Afghanistan-Pakistan border.

"I think everyone recognizes that it has to be done," Mixon said solemnly.

But the military&#8217;s role there must be better defined, he added, and the U.S. Agency for International Development and State Department components must be stepped up.

"From a strategic perspective and a soft power perspective, that&#8217;s something that the U.S. has got to expand," he said.

After serving in Iraq and South America, Mixon knows the limitations of a military&#8217;s ability to affect the behavior of civilian populations.

"Military is a means to a political end," he said. The question he asks himself is: "What is the political end going to be?"

"I think that will change in the next few months," he said with confidence.

In the Chiang Mai combined joint staff headquarters, Cobra Gold leaders say that even at the command level, training has strained under the pressures of constant warfare.

The Army&#8217;s transformation to a smaller, more expeditionary-based structure, which was launched after 9/11, included the authorization to stand up a fully deployable Operational Command Post, or OCP, in each of the five service component commands theaters, including U.S. Army Pacific.

But that plan was created in an environment far different from what exists today, explained Col. Sean Callahan, 46, from Norwalk, Conn., the current operations officer for the OCP out of Fort Shafter, Hawaii.

To date, USARPAC&#8217;s OCP has only deployed twice, to the Japanese exercise "Yama Sakura" in 2007 and 2008, and in neither instance at full strength.

"We deploy a core element, a fraction of what we&#8217;re authorized," said Callahan, who brought the OCP to Cobra Gold for the first time this year. "We haven&#8217;t been able to resource it like we originally intended. So we have something much less than that, right now. Something that can keep the lights on."

Until help arrives, military trainers are forced to adjust to the demands handed to them.

"Training management is really being challenged throughout the Army because of the operational tempo and the commitment to the war, there&#8217;s no question," Callahan said.

"Back in the good old Cold War days, you had a fairly predictable stable cycle throughout the year. I could tell you a year from now, as a company commander, when I was going to be in a down cycle, when I was going to be in an intense training cycle, [and] when I would be in a support cycle," Callahan said. "Here, you&#8217;re challenged to do any of that because of the personnel constraints, because of the demands of the war."

The colonel said he is encouraged that the Army is looking at fundamental changes to the training tempo.

But the Army never has recovered from the assumptions behind the original transformation plan.

In the meantime, Callahan defended holding exercises like Cobra Gold, no matter how difficult.

"Look, you&#8217;ve got to pay attention to the Pacific. There are plenty of terrorist organizations, not just in the Middle East but throughout Asia and the Pacific region," he said.

One briefing slide Callahan put together shows 14 terrorist organizations over the map of Southeast Asia. "And that&#8217;s not exhaustive," he said.