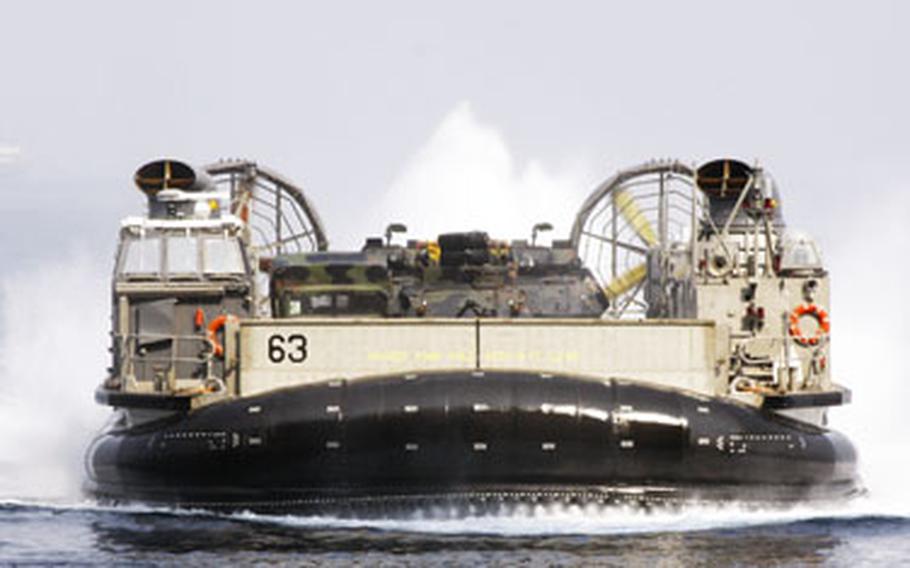 An LCAC hovercraft roars into the well deck of the amphibious assault ship USS Essex in the Gulf of Thailand, during Cobra Gold 2009, an annual multinational exercise in Southeast Asia. (Kevin Baron/S&S)

An LCAC hovercraft roars into the well deck of the amphibious assault ship USS Essex in the Gulf of Thailand, during Cobra Gold 2009, an annual multinational exercise in Southeast Asia. (Kevin Baron/S&S) 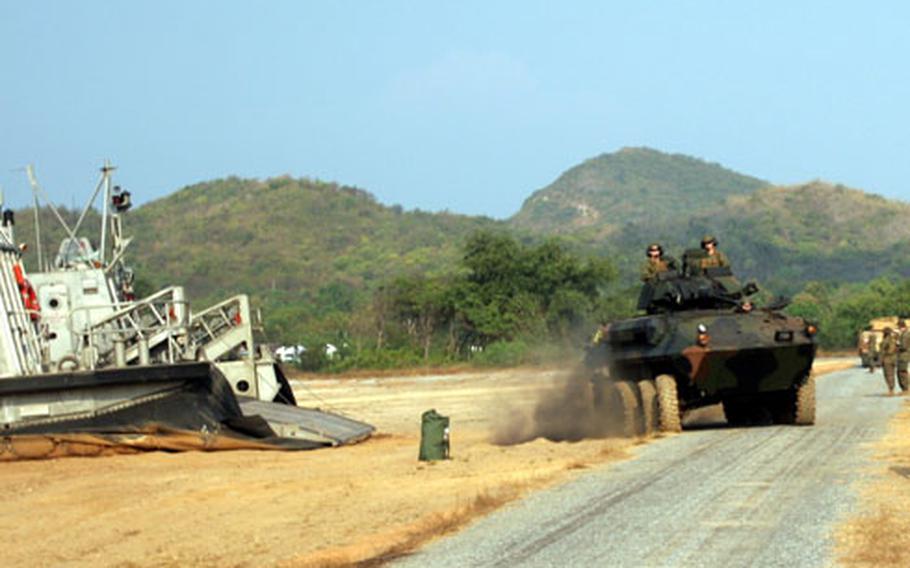 GULF OF THAILAND, Thailand &#8212; From its serene northern mountains dotted with Buddhist temples to the lowland coastal plains lined with coconut plantations, Thailand this week is covered with a thick haze and nearly 7,000 U.S. troops &#8212; joined by more than 4,000 others from Thailand, Japan, Indonesia and Singapore &#8212; who have come for the 28th annual Cobra Gold exercise.

After weeks of preparation, the joint, multinational exercise which ranges from amphibious assaults to humanitarian evacuations is under way at more than a dozen locations across the kingdom and over the sapphire blue waters off its famous tropical beaches.

For Mixon, this Cobra Gold has two objectives: to teach coalition warfare and provide tactical training. U.S. servicemembers of all ranks are working alongside Southeast Asian militaries to break down cultural barriers and build up trust in each other&#8217;s capabilities, he said.

"It&#8217;s all about relationships," Mixon said Monday, aboard his UC-35, an executive jet that brought the general from Joint Task Force headquarters in Chiang Mai to the southern Thai air base of Utapao. "If you don&#8217;t work through that, you&#8217;re not going to be able to do that on the fly."

From staff-level training simulations held in hotel ballrooms to coalition live-fire exercises in the field, the five-nation coalition trains to be ready for the real deal.

But Cobra Gold is also an open show of force capabilities that, according to Mixon, demonstrates the U.S. continues to have strong, capable allies in the region.

"It shows the U.S. commitment to stability and security in the area. That&#8217;s an important strategic message [to send]," the three-star general said.

Among those to receive that message include Thailand, Singapore, the Philippines and adjacent Burma, all of which are dealing with internal conflicts or insurgencies. This year, Thailand expressed interest in learning counter-IED training, Mixon said, after coming across such devices planted by separatist insurgents in the south.

To that end, Cobra Gold trains participants to be effective coalition partners who could, if only eventually, take the lead in regional crises.

From Utapao, an MH-60S Knighthawk helicopter brought Mixon aboard the USS Essex, the forward-deployed amphibious assault ship out of Sasebo Naval Base, Japan, that has come to the gulf as the centerpiece of the naval and Marine components of the exercise.

Aboard the Essex, a small aircraft carrier with a huge back door for deploying landing craft, Mixon was briefed by Capt. Donald Schmieley, commodore; and Col. Paul Damren, commanding officer of the 31st Marine Expeditionary Unit, about their capabilities in place for the exercise.

Capt. K.B. Canady led Mixon on a tour of the ship, joined by Rear Admiral Richard Landolt, Commander of the Amphibious Force, 7th Fleet, out of Okinawa. The highlight came with a Marine LCAC hovercraft entering the Essex&#8217;s open rear well, its fans whipping the winds so hard that huge paint chips peeled off the Essex&#8217;s inner walls. Later in the week, the craft will ferry Marines to the beaches where they will move inland to pick up Japanese role-playing evacuees of a mock coup, process them, and bring them safely to the ship.