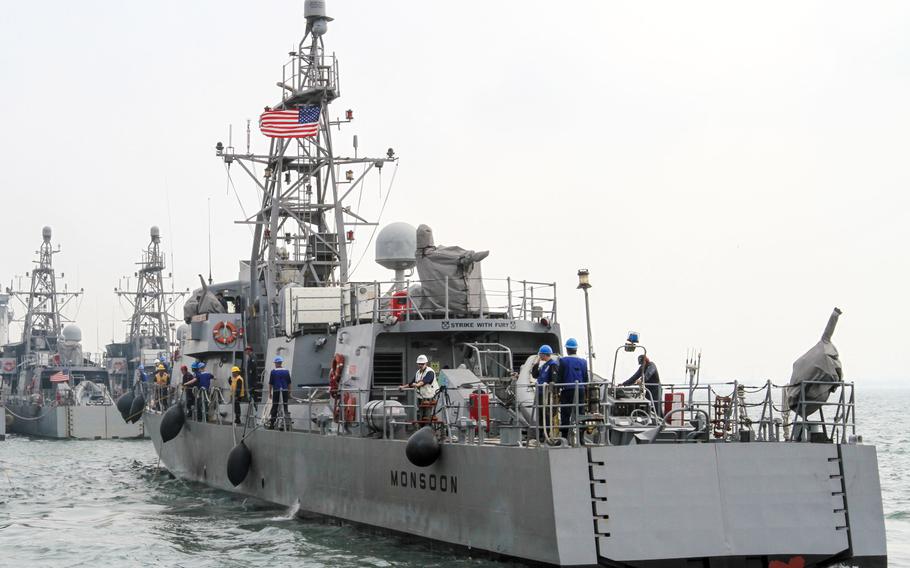 The USS Monsoon moves to a spot alongside the pier at Naval Support Activity Bahrain, Aug 28, 2014. The ship has received the U.S. Atlantic Fleet's 2015 Marjorie Sterrett Battleship Fund Award. (Stars and Stripes)

MANAMA, Bahrain — The Bahrain-based USS Monsoon — one of 10 coastal patrol ships forward-deployed to the U.S. 5th Fleet area of responsibility — has received an award given to “battle-ready” ships in the U.S. Atlantic and Pacific fleets.

The tiny crews of about 30 sailors aboard coastal patrol ships have to deal with a high turnover rate as crewmembers are typically assigned for only a yearlong tour.

“The rapid rate that sailors come and go on a PC creates a unique challenge to the operational readiness of our unit,” Monsoon’s operations officer Lt. j.g. Ben Carrington said in a statement.

The Marjorie Sterrett Battleship Fund Award is presented annually by the chief of naval operations. The Monsoon “earned the 2015 ... award for its superior performance, battle efficiency and ship’s readiness in U.S. Atlantic Fleet,” the Navy said in a statement Monday.

The Marjorie Sterrett Battleship Fund Award was established in 1917 by the New York Tribune Association and initiated by a letter from 13-year-old Marjorie Sterrett, who donated a dime toward building a new battleship before the end of World War I.

Coastal patrol ships based in the 5th Fleet area of responsibility are tasked with escorting other ships, providing maritime security, protecting infrastructure and participating in exercises with regional allies.