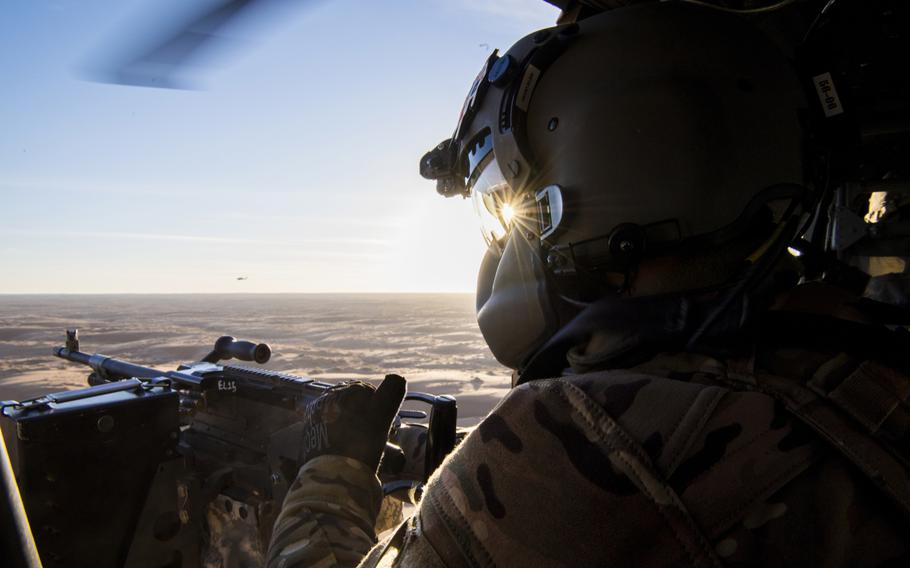 A U.S. Army flight medic with the 738th Air Expeditionary Advisory Group scans for threats Dec. 5, 2018, while participating in the NATO led Resolute Support mission in Afghanistan. The U.S.-led coalition in Afghanistan has stopped assessing whether the country?s districts are controlled by the government or insurgents. (Clayton Cupit/U.S. Air Force)

A U.S. Army flight medic with the 738th Air Expeditionary Advisory Group scans for threats Dec. 5, 2018, while participating in the NATO led Resolute Support mission in Afghanistan. The U.S.-led coalition in Afghanistan has stopped assessing whether the country?s districts are controlled by the government or insurgents. (Clayton Cupit/U.S. Air Force) 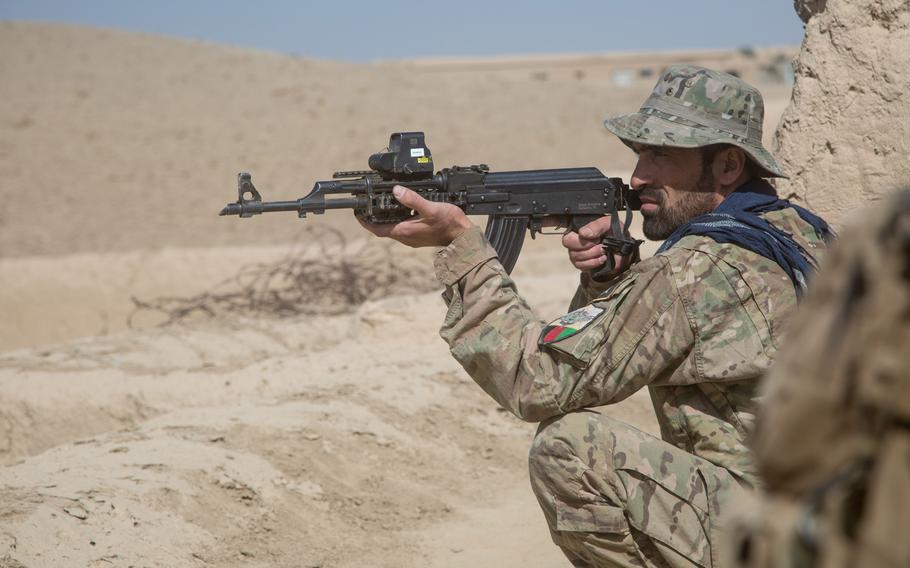 KABUL, Afghanistan — The U.S.-led coalition in Afghanistan has stopped assessing which districts in the country’s 34 provinces are controlled by the government or by insurgents, meaning nearly every metric to measure success of America’s longest war is now either classified or no longer tracked.

For about three years, NATO’s Resolute Support mission had produced quarterly district-level stability assessments that counted the districts, total estimated population and total estimated land area that Kabul controlled or influenced, as well as those under the sway of insurgents and those contested by both sides.

Officials have stopped the assessments because they were “of limited decision-making value” to Army Gen. Scott Miller, commander of the Resolute Support mission, the coalition told the Special Inspector General for Afghanistan Reconstruction, according to a quarterly report published late Tuesday.

The last district-stability data NATO’s Resolute Support mission provided to SIGAR and published in January, showed that as of October 2018, Kabul’s control or influence over the country’s 407 districts was at its lowest level since the watchdog started tracking the figures in late 2015. There are officially 398 districts in the country, but the coalition assessment includes a city and eight temporary districts.

Taliban insurgents have been expanding their influence in rural areas, and while they’ve yet to seize a major city, they’re believed to be stronger than at any point since the war began over 17 years ago — a major boon for the group as it continues direct negotiations with the U.S. aimed partly at an American troop withdrawal.

In January, the Pentagon told SIGAR that the models for calculating district stability were not wholly reliable and that the measurements were “not indicative of effectiveness” of the Trump administration’s South Asia strategy or of progress toward overall stability.

It’s “more important to instead focus on the principal goal of the strategy of concluding the war in Afghanistan on terms favorable to Afghanistan and the United States,” the Pentagon said.

The conditions-based South Asia strategy is focused on finding a diplomatic solution to end the conflict and has included an accelerated U.S. bombing campaign against Taliban targets, aimed at pushing the insurgents to the negotiation table.

Led by U.S. peace envoy Zalmay Khalilzad, U.S. officials have met with Taliban representatives in recent months for several rounds of direct talks that have progressed further than any previous negotiations. But many analysts say it’s unlikely the talks resulted from the uptick in U.S. military action.

SIGAR has recognized the limitations of district control data but described it as one of few useful tools for U.S. taxpayers to track security changes in the country where America has spent over $130 billion on reconstruction efforts since the start of the war, mostly to build Kabul’s military and police forces.

“While the data did not on its own indicate the success or failure of the South Asia strategy, it did contribute to an overall understanding of the situation in the country,” SIGAR said.

Last year, Gen. John Nicholson, then the top U.S. commander in Afghanistan, said that while some traditional metrics for gauging the war’s success, like population control, were “relevant and important,” they should not outweigh the importance of advancing the peace process.

Under Nicholson, the coalition had been focused on establishing government control over the areas where 80% of the Afghan populace lived. As of October, less than 65% of the population lived in areas under the government’s sway.

Officials have been increasingly classifying information on the war in Afghanistan.

In January, President Donald Trump told acting Defense Secretary Patrick Shanahan to halt the public dispersal of watchdog reports on the military. During a Cabinet meeting at the White House, Trump said the enemy studies every line of the reports, which he said should be locked up and kept from the general public.

But there’s no indication the district-stability assessments were discontinued as a result of Trump’s comments, SIGAR head John Sopko told reporters last week, saying it was more likely part of an ongoing trend toward a lack of transparency.

Casualty and attrition rates among security forces, detailed capability assessments and information about operational readiness of equipment were blocked in late 2017, SIGAR said.

Several months later, SIGAR said additional information — including population- and district-control data — was also being withheld. The military immediately refuted the reported restrictions on control data, blaming a problem with “the data transfer process.” The figures were later made available.

The average number of enemy-initiated attacks each month was up 19% from November through January, compared to the previous quarter.

While for the third consecutive quarter the strength of Afghan security forces remained at the lowest level seen since the withdrawal of most international forces at the end of 2014, Afghan forces also saw a rise in casualties in the most recent reporting period.

Deaths and injuries among the security forces were about 31% higher from December 2018 through February 2019, compared to the same period a year before, SIGAR said, citing figures provided by the international coalition.

“These trends are notable considering that violence has typically waned during the winter months in Afghanistan over the last several years,” the watchdog said.

Seven Americans were killed in combat in the first 100 days of 2019, a steep increase compared to the same period in the previous four years, when there was just one American combat fatality each year.