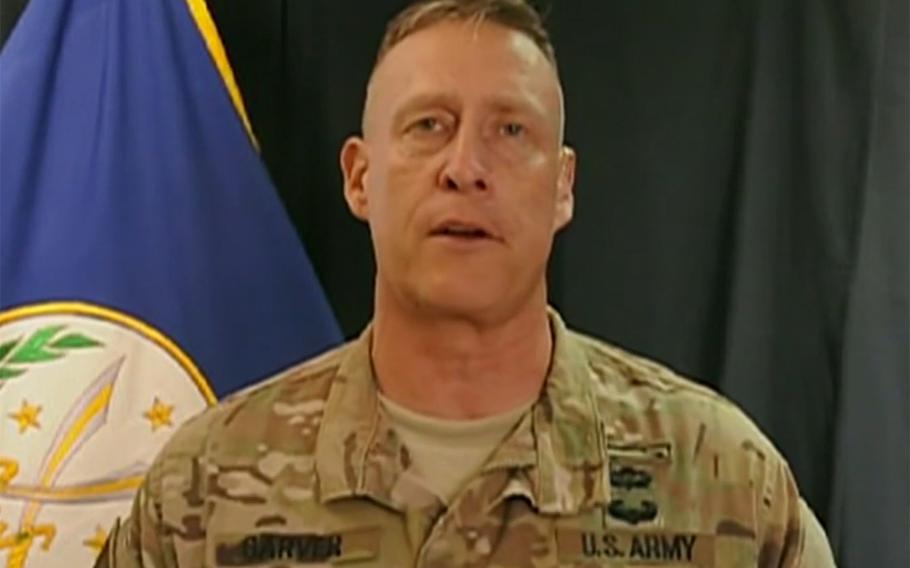 In a screen capture from a July 6, 2016 video, Operation Inherent Resolve spokesman Col. Christopher Garver talks to reporters on a teleconference. (From a DOD video)

WASHINGTON — A U.S. military spokesman said Friday that Islamic State group fighters have used thousands of civilians as human shields and decoys in the battle for the northern Syrian city of Manbij, where it was reported earlier this week that nearly 60 civilians were killed by an airstrike.

The U.S.-backed Syrian Democratic Forces have captured about half of Manbij in recent days, though they’ve faced fierce resistance from the terrorist group as its fighters attempt to hold on to the strategic city about 50 miles northwest of Raqqa, said Army Col. Chris Garver, the Baghdad-based spokesman for the U.S.-led anti-Islamic State group coalition.

Manbij is a stop along what is believed to be the final major supply route that the Islamic State group controls from its de facto Syrian capital in Raqqa to the outside world, through Turkey.

The SDF, predominantly comprising Kurds, has moved “slowly and deliberately” through western Manbij and toward the city’s center, where at least “a couple thousand” civilians remain trapped by the Islamic State group, Garver said. Their presence has complicated the operations to capture the city, which would be among the largest strategic victories to date by the SDF on their push toward Raqqa.

The SDF troops “are being very careful in how they fight this,” Garver said. “When you realize [The Islamic State group] is sending civilians out toward the lines to draw fire so they can use that as a propaganda tool or in some way get a benefit from [U.S.-backed forces] accidentally killing civilians, that keeps that operation very deliberate as they work through the city.”

Activist groups observing the war in Syria raised allegations earlier this week that U.S.-led coalition airstrikes have killed dozens of civilians near Manbij. The Operation Inherent Resolve coalition has conducted more than 500 airstrikes near the city since May 21, when the SDF launched its siege.

The Pentagon is continuing a “credibility assessment” of those reports, Garver said Friday. That initial investigation should be completed in about the next 10 days, when a commander will determine whether the United States will launch a formal investigation into the incident. Garver said Army Lt. Gen. Sean MacFarland, the top OIR commander, and Army Gen. Joseph Votel, the U.S. Central Command chief, are monitoring the reports.

“We apply an extraordinary amount of rigor into strike-clearance procedures to do everything possible to avoid civilian casualties or unnecessary collateral damage and to comply with the principles of the law of armed conflict,” Garver said.

The accusations concern attacks on a convoy of vehicles and nearby buildings in an Islamic State-held village just north of Manbij, where SDF forces observed militants preparing for an attack early Tuesday morning.

It would not be the first time that the Islamic State group used the tactic of mixing civilians into a convoy of its fighters. The terrorist group was believed to have used a similar ploy last month when a large group of fighters fled Fallujah after losing control of the Iraqi city.

Coalition aircraft held off striking that convoy June 29 until it was certain only Islamic State group fighters would be hit. Estimates indicated more than 100 vehicles were destroyed and about 250 militants were killed in that strike.

“If we do not know what is in the vehicles, we will not pull the trigger,” Garver said Friday.

Intelligence, surveillance and reconnaissance assets were used to determine only Islamic State fighters remained in the formation just north of Fallujah before it was bombed. If it is determined the Islamic State used a similar tactic north of Manbij, Garver said, the coalition could make some adjustments to its targeting procedures in that area.

Nonetheless, he added, the potential for civilians to be used as shields against the U.S.-led bombing campaign “doesn’t hold up the air war any more than we already hold ourselves up in trying to ensure that we are not hitting anything other than [the Islamic State group] when we shoot at it.”