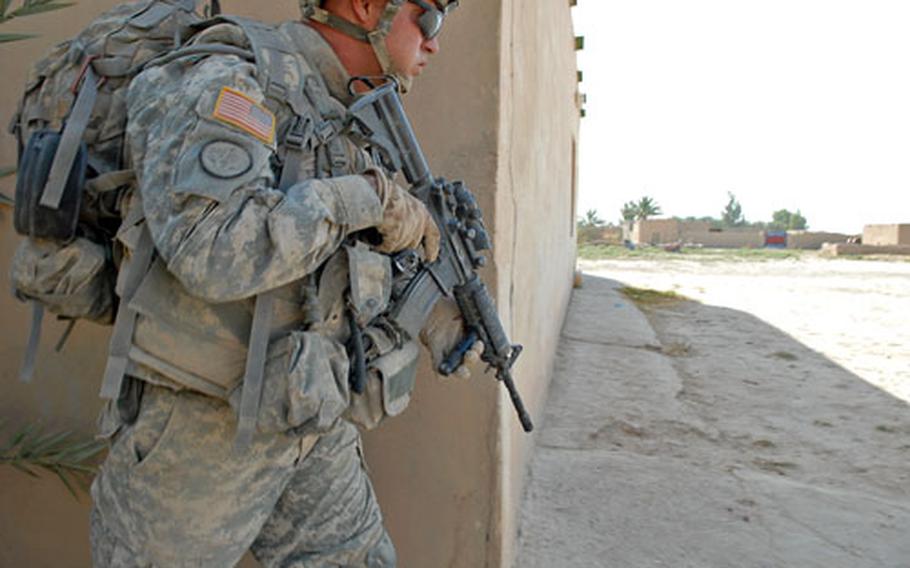 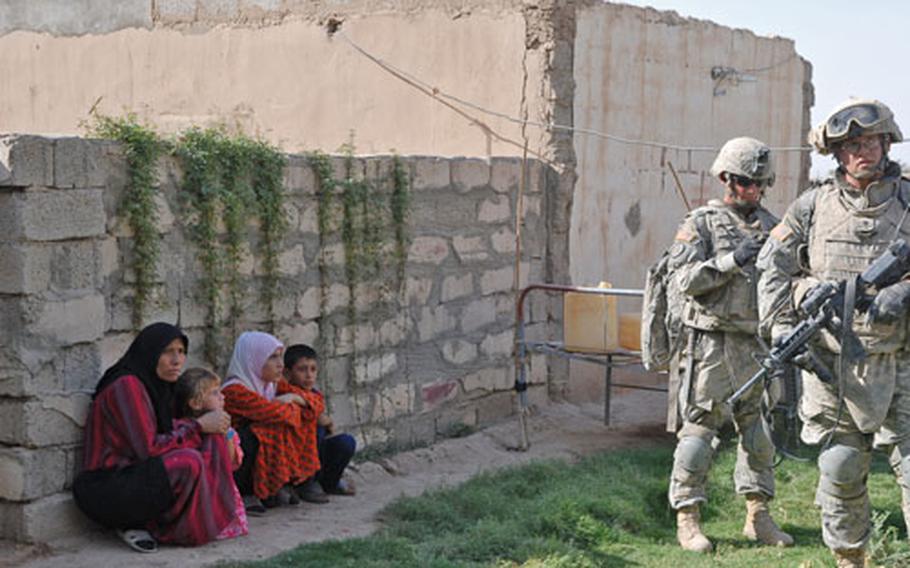 An Iraqi woman and her children watch American soldiers while they searched her home Friday in Samood, Iraq. The soldiers didn’t find anything in this home. (James Warden / S&S) 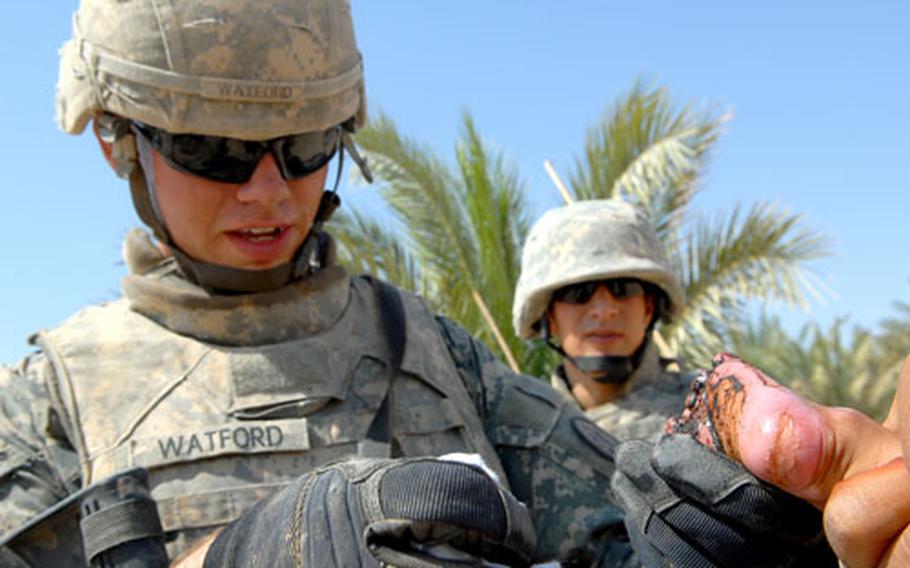 Spc. Brian Watford, a medic in Fox Troop, 2nd Squadron, 3rd Armored Cavalry Regiment, treats a boy’s foot Friday in Samood, Iraq. The boy’s mother told soldiers searching her home that the boy burned his foot while she was cooking bread and asked them for help. Watford cleaned the foot and gave the woman some antiseptic wipes to help it heal. (James Warden / S&S) 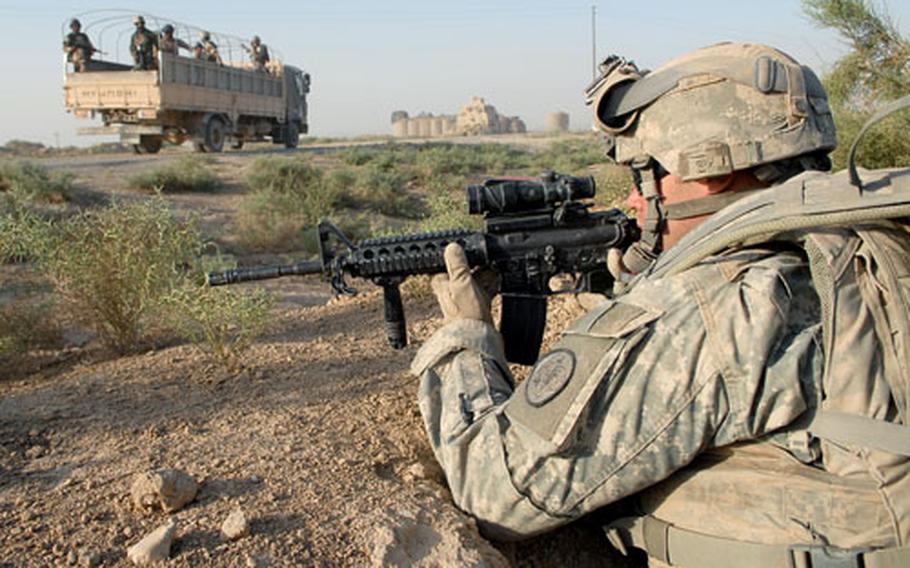 Pfc. Ryan Vickers, a soldier in Fox Troop, 2nd Squadron, 3rd Armored Cavalry Regiment, waits for Iraqi Army soldiers to unload from a truck Friday in Samood, Iraq, at the start of Operation Saber Pursuit. Iraqi troops led the way into the villages, moving people out of the homes and gathering the fighting-age males for further interrogation. The Americans then searched the homes more thoroughly and questioned the Iraqi men. (James Warden / S&S)

SAMOOD, Iraq &#8212; Coalition forces launched a long-expected offensive in southern Diyala province early Friday morning only to find that most of the insurgents in the area had already fled.

Just three people had been detained by Friday afternoon, following the start of "Saber Pursuit," a five-battalion operation targeting al-Qaida in Iraq cells in the southern part of Diyala&#8217;s Balad Ruz district.

The operation is the Iraqi government&#8217;s latest to clear major insurgent strongholds, including operations in Mosul and Basra. Officials announced last June that the operation was coming, and enemy fighters appear to have gotten the hint. All the fighting-aged males were missing from the villages of Fatamia and Hagwar, leaving behind only women and children. Soldiers found only about a dozen men in Samood. They also found several empty weapons cache sites that appeared to have been recently dug up.

"You are kind of excited that we&#8217;re going out to do something new," said Staff Sgt. Robert Sherwood, a 2nd Squadron, 3rd Armored Cavalry Regiment squad leader. It kind of winds down when you get here and find out there&#8217;s no one here because (the mission was) broadcast on the TV.

About 30 hardcore insurgents total were thought to be in the area, in addition to other low-level fighters, said Capt. Matthew Shown, the 2nd Squadron&#8217;s intelligence officer. The mission is expected to continue several more days.

Commanders designed Saber Pursuit to surround the area and leave insurgents no place to run. Iraqi army soldiers and soldiers with 2-3&#8217;s Fox Troop came in from the west and searched the villages of Hagwar and Samood, while Grim Troop soldiers searched Fatamia. The squadron also flew in soldiers by helicopter to block the eastern part of the area.

Soldiers with 2nd Brigade, 1st Armored Division &#8212; accompanied by Iraqi Army soldiers &#8212; cleared villages in the south and kept foreign fighters from fleeing in that direction. Meanwhile, troops from the central Asian country of Georgia guarded the area&#8217;s western flank, while 2-3&#8217;s Lion Company held down the north.

While details of Saber Pursuit were kept secret, the Iraqi government announced well beforehand that it was planning a major operation in Diyala. Prime Minister Nouri al-Maliki mentioned the operation publicly as early as June.

Residents around Diyala asked soldiers about the operation in the days leading up to it, including some local officials who were upset that they hadn&#8217;t been told more details. In other cases, the Americans could only shake their heads when Iraqis asked why the operation had been so widely publicized.

Intelligence sources reported that the most-wanted insurgents fled the area prior to the operation, and the Americans lost track of them six days before Saber Pursuit, officials said. The units could not apprehend them earlier because they were busy securing other parts of the Balad Ruz district.

Roadside bombs also make it dangerous to venture into the area on short notice. The last time U.S. troops went into the area, they lost eight vehicles in four hours. Soldiers hit two roadside bombs during this week&#8217;s mission and found two more before they could be detonated. Lower level insurgents also may still be in the area, including some deliberately left behind to observe the coalition&#8217;s tactics.

"We&#8217;re expecting that there are guys in there that are bad guys that aren&#8217;t necessarily being watched by us or the [Iraqi army]," Shown said.

Most soldiers grumbled about sweating through the sweltering heat only to have advanced notice warn the insurgents ahead of time, but others said the operation will still help in the long run. First Lt. Stephen Prater, a Fox Troop platoon leader, noted that the Iraqis and Americans worked together better this time compared to past missions. Those same Iraqis will be staying behind when the Americans leave, which Prater said will make it much harder for the insurgents to return.

"I think it&#8217;s going to be successful having the insurgents out of here," he concluded.