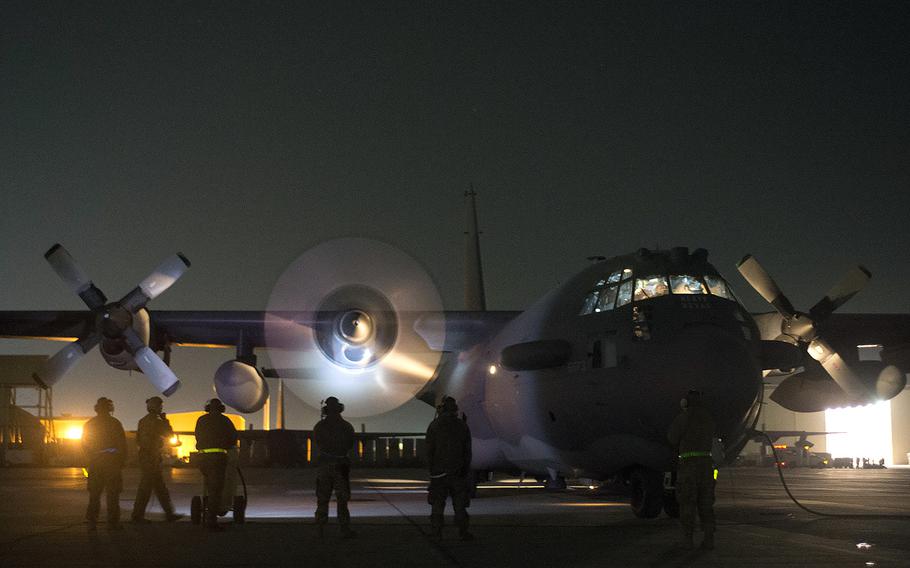 U.S. airmen monitor the engine starts of an AC-130H Spectre gunship on Nov. 27, 2013, at an undisclosed location in Afghanistan. Coalition officials in Afghanistan said Saturday, Oct. 24, 2015, that civilians were likely killed in an airstrike on a Doctors Without Borders hospital in Kunduz on Oct. 3. (Jason Robertson/U.S. Air Force)

KABUL, Afghanistan — A coalition investigation team has officially acknowledged that civilians were likely killed by the American airstrike on a Doctors Without Borders hospital in Kunduz earlier this month.

The initial assessment, released by the NATO-led Resolute Support coalition on Saturday, adds no new information to the controversy over what happened on Oct. 3, when a U.S. special operations AC-130 shelled the hospital.

At least 23 medical staff and patients were killed in the attack. Doctors Without Borders, which goes by its French initials MSF, says seven bodies remain unidentified.

"The Combined Civilian Casualty Assessment Team determined that the reports of civilian casualties were credible, and we continue to work with the government of Afghanistan to fully identify the victims," Resolute Support spokesman Brig. Gen. Wilson Shoffner said in a statement.

Defense Secretary Ash Carter asked for patience at a Pentagon press briefing on Friday, saying that a thorough investigation would take time.

"We want to get this done, and I want him to get it done, but we wanted to get it done absolutely right," he told reporters. "I want the answers to the questions in those investigations. Accountability is part of our obligation to those who died in Kunduz, and it must inform everything we do here at the Department of Defense."Several investigations have been launched by NATO, the American military and the Afghan government, but MSF is demanding a probe by an independent third party, such as the International Humanitarian Fact-Finding Commission.

In a statement released Friday, the nonprofit said that a small MSF team had been sent to Kunduz to assess damage to the hospital, to work with investigators and to ensure the welfare of staff remaining in Afghanistan. "(But) until MSF understands what happened on the night of the attack and has strong assurances that it cannot happen again, the Kunduz trauma center cannot be reopened. Our staff and patients must be safe."

American military officials have defended both the U.S. and NATO investigations as "independent and unbiased."

"My intent is to disclose the findings of the investigation once it is complete," the top U.S. commander in Afghanistan, Gen. John Campbell, said in Saturday’s NATO statement. "We will be forthright and transparent and we will hold ourselves accountable for any mistakes made. While we desire the investigation to be timely, what’s most important is that it be done thoroughly and correctly."

MSF officials say they repeatedly provided the coordinates of the hospital to U.S. and Afghan military officials. Once the strike began, they say, it continued for roughly an hour despite desperate phone calls by MSF staff to military leaders.

While American leaders say the strike was a mistake, Afghan defense officials have insisted the attack targeted Taliban fighters operating from the hospital, an accusation MSF and eyewitnesses reject.

"Both inquiries continue to look at a series of potential human errors, failures of process and technical malfunctions that may have contributed to the mistaken strike on the hospital," Shoffner said.