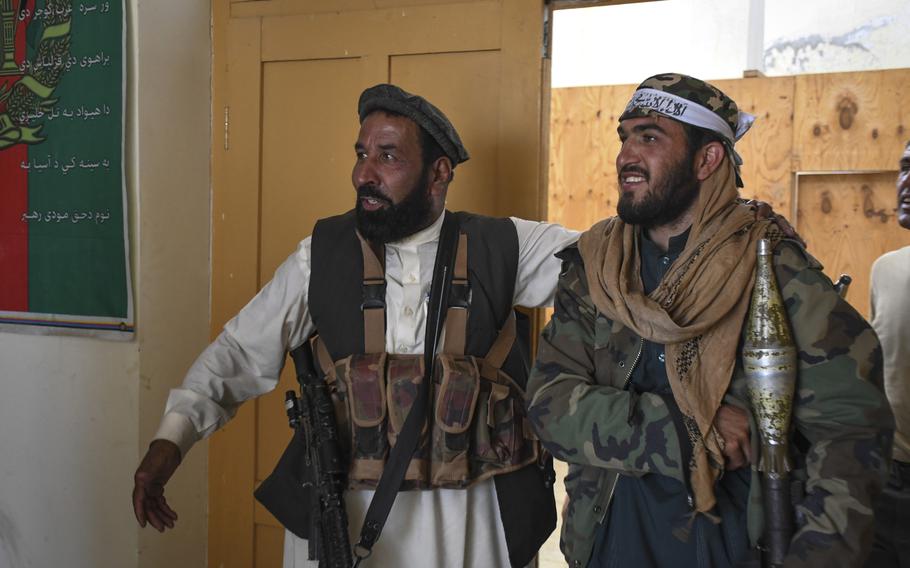 Buy Photo
Two members of the Afghan Local Police celebrate the Eid holiday during a cease-fire between the Taliban and government forces June 16, 2018. The U.S. plans to end funding for the police group by this fall. (J.P. Lawrence/Stars and Stripes)

Buy Photo
Two members of the Afghan Local Police celebrate the Eid holiday during a cease-fire between the Taliban and government forces June 16, 2018. The U.S. plans to end funding for the police group by this fall. (J.P. Lawrence/Stars and Stripes) Buy Photo
A member of the Afghan Local Police watches over a road May 10, 2020 from his outpost in Khogyani district of Nangarhar province. The U.S. plans to end funding to the police group by this fall. (J.P. Lawrence/Stars and Stripes) 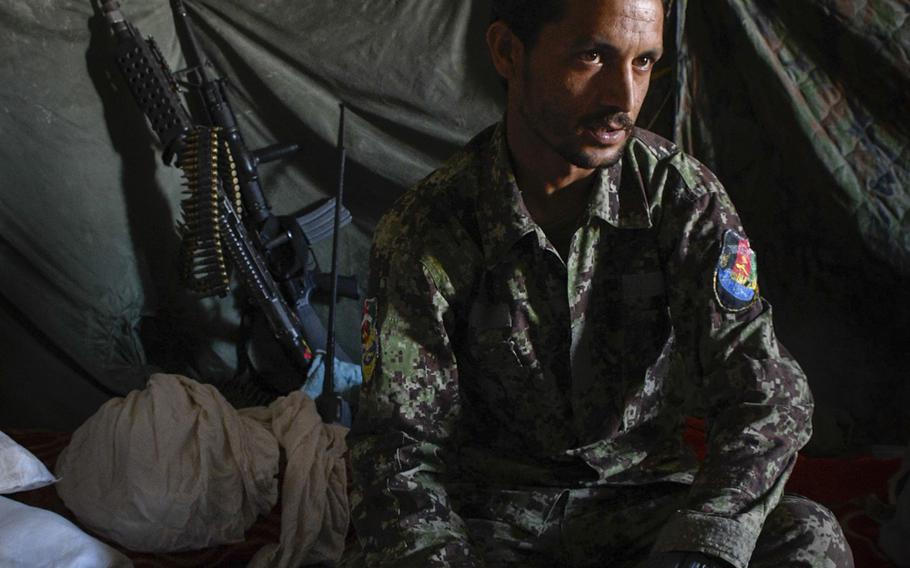 Buy Photo
Lt. Rahmatullah Zaheer, a member of the Afghan National Army's Territorial Force, said on May 10, 2020 that he joined because he wanted to protect his home in Nangarhar province. (J.P. Lawrence/Stars and Stripes) Buy Photo
Faridullah, a member of the Afghan National Army's Territorial Force, stands watch from his outpost in Nangarhar province, a region recently cleared of Islamic State fighters but still under threat of the Taliban. (J.P. Lawrence/Stars and Stripes) 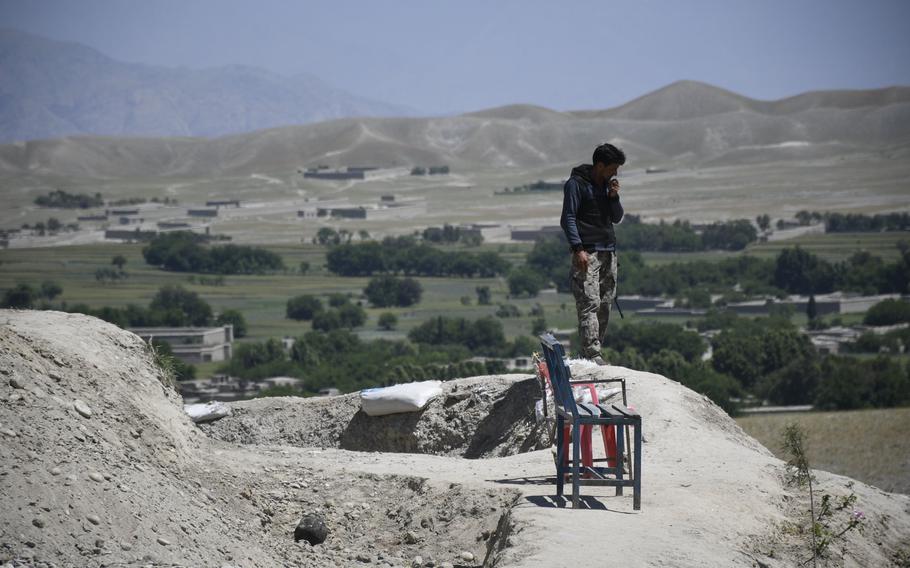 Buy Photo
A soldier with the Afghan National Army's Territorial Force looks out from his outpost in rural Nangarhar province of Afghanistan on May 10, 2020. President Ashraf Ghani announced the resumption of offensive operations against the Taliban three days afterward. (J.P. Lawrence/Stars and Stripes) Buy Photo
A member of the Afghan National Army's Territorial Force patrols a roadway to thwart the planting of roadside bombs in Nangarhar province May 10, 2020. (J.P. Lawrence/Stars and Stripes) Buy Photo
A member of the Afghan Local Police enjoys the scent of flower petals May 10, 2020, in his outpost in Khogyani district of Nangarhar province. The U.S. plans to end funding to the police force by this fall. (J.P. Lawrence/Stars and Stripes)

KHOGYANI DISTRICT, Afghanistan — Roadside bombs remain the biggest threat to a fledgling force of U.S.-backed fighters on daily road patrols in this swath of eastern Afghanistan once held by the Islamic State group.

But the unit, part of the Afghan National Army Territorial Force, lacks a bomb detector and doesn’t have enough ammunition to hold off the Taliban in a sustained fight, said Lt. Rahmatullah Zaheer, who along with the other nine men in his unit joined the 2-year-old force to defend their home district, a hilly region southwest of Jalalabad blanketed by wheat and poppy fields.

“This is our home and we want to protect it,” he said.

The Territorial Force, created in 2018 and slated to replace the corruption-plagued Afghan Local Police, has been hampered by supply issues and “leadership gaps,” leading the NATO coalition to pause its planned expansion to 121 companies, up from 105 now authorized, a government watchdog said Tuesday.

However, the coalition still expects the police force to dissolve later this year, raising concerns that some could join the insurgency.

The 18,000-strong police force has been accused of “predatory behavior,” the Lead Inspector General for Operation Freedom’s Sentinel said in a report to Congress.

Some police have fallen under the sway of warlords who have used them for extortion rackets and settling personal scores, the Defense Department has said.

The Territorial Force was designed with greater accountability in mind. Each company is made up of about 120 local fighters backed by community elders, but under the national military’s control.

The idea is that they’d be highly motivated and knowledgeable fighters on familiar turf, able to serve as a “hold force” to free regular army units for maneuvers and offensive operations.

They’ve proven effective in Nangarhar province, once an ISIS stronghold until U.S. and Afghan military operations — aided by Taliban offensives — largely drove the militants out last fall, the IG said.

Zaheer and his men are part of about 200 Territorial Force fighters securing the district, which tribal elder Malik Maki said is also home to some 400 Taliban fighters.

The insurgents have sniped at government outposts, he said in early May, but they seem more focused on killing remaining ISIS fighters, with the two Islamist groups staging several tit-for-tat assassinations in recent days.

The Defense Intelligence Agency estimated in mid-March that some 100 ISIS members were still in Nangarhar province, out of anywhere from 300 to 2,500 in the whole country, the IG reported.

But Territorial Force members still struggle for legitimacy in the eyes of some military commanders, and units have failed to draw in recruits in some districts of the country’s most densely populated provinces, the report said.

For Zaheer, one of the issues is the pay cut he took to join the Territorial Force. Recruits receive about three-quarters of the salary soldiers are paid in the regular army, making each company about 45% less costly to operate, the Special Inspector General for Afghanistan Reconstruction said in an April 2018 report.

The Territorial Force or something similar could also prove useful in the Pentagon’s long-term plans for reintegrating Taliban fighters after a peace deal, SIGAR said last month, citing defense officials.

It’s too soon to say if the insurgents would join any government force after such a deal, a Taliban spokesman said this month. Still, one fighter said he would take the job if offered.

“I will definitely need a job after the Americans leave and our leaders come to an agreement with the Kabul administration,” said Mir Islam Fidayee, a Taliban fighter in southern Afghanistan. “As a fighter, it will be great if I get a job in the military.”

Integrating the Taliban, however, could prove difficult for a force that relies on the “buy-in” of locals, said Kate Clark, senior analyst with Afghanistan Analysts Network.

“If you’re imposing something from the top that goes against local wishes, the pattern has been for local defense forces to go awry,” she said.

In Khogyani, Zaheer would welcome his former Taliban enemies if they joined up, he said, but he and others in the unit laughed when asked if that was likely to happen.

“They think they can wait until America will leave, because they think they will take over and be in power,” Zaheer said. “We don’t know what the politicians will do, but we are ready for fighting.”