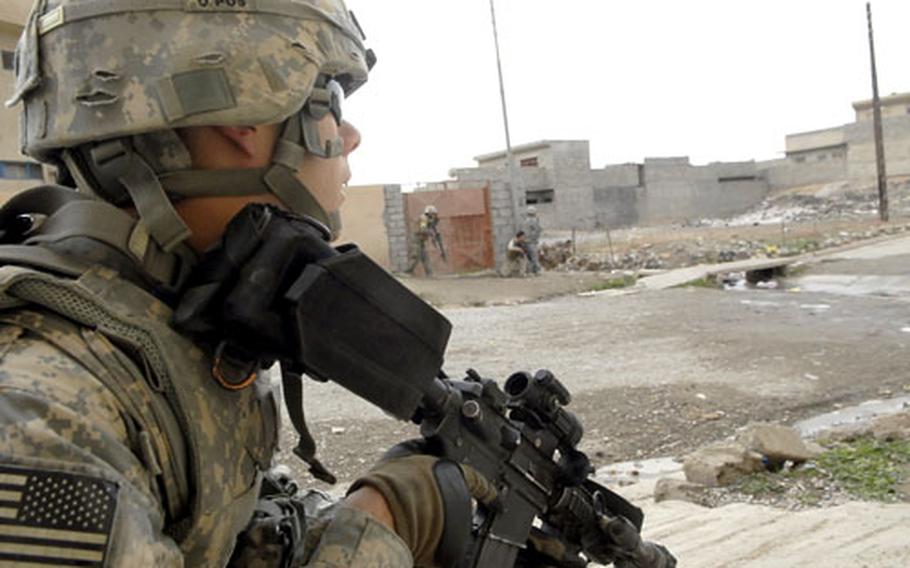 A U.S. soldier peeks out from behind a wall during a recent gunfight in Mosul. (Heath Druzin / S&S)

A U.S. soldier peeks out from behind a wall during a recent gunfight in Mosul. (Heath Druzin / S&S) 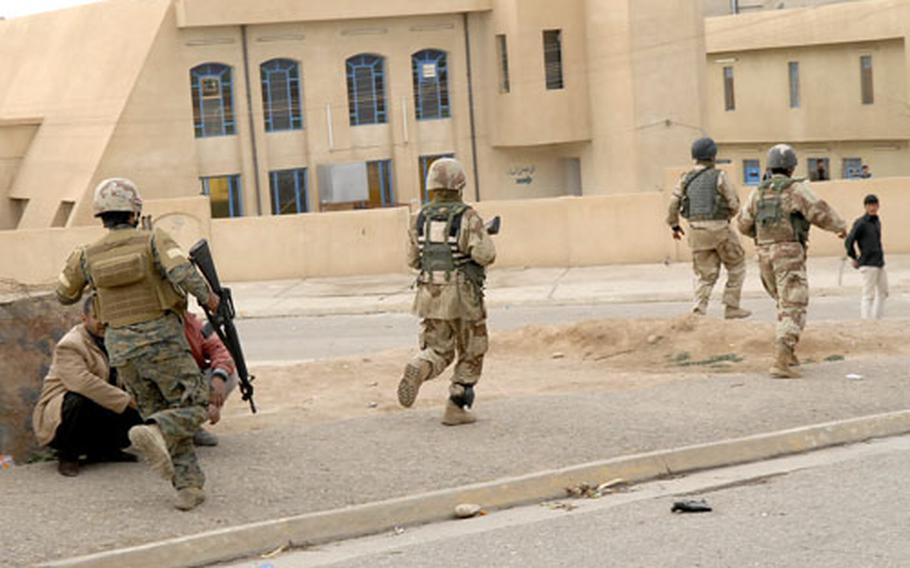 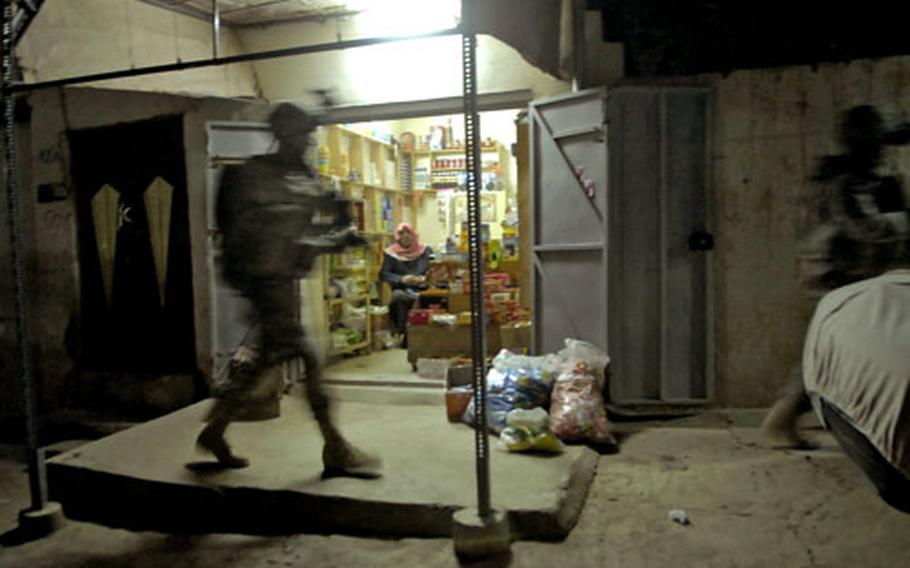 A U.S. soldier passes a shop during a night patrol in Mosul. (Heath Druzin / S&S) 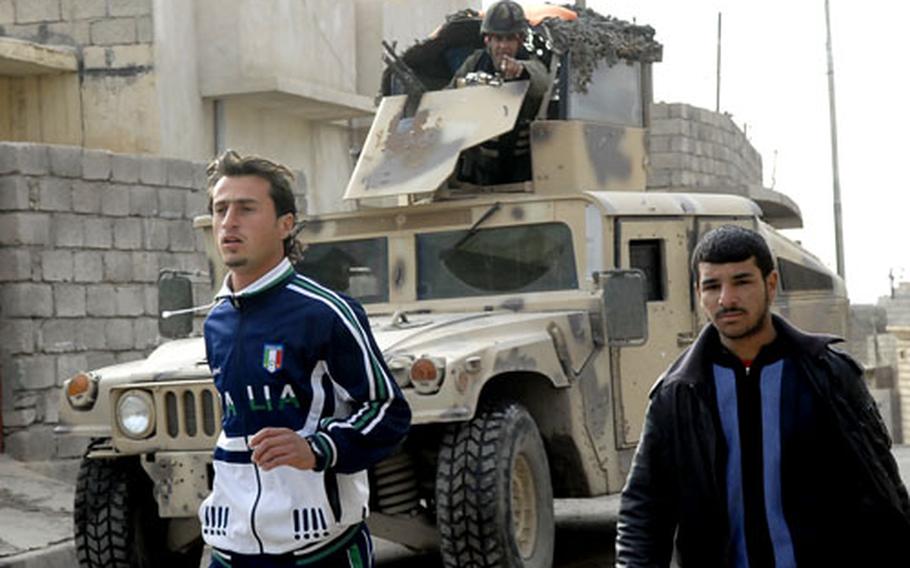 Iraqi soldiers use Humvees to round up men for questioning in Mosul after an Iraqi soldier was shot at a nearby checkpoint. (Heath Druzin / S&S) 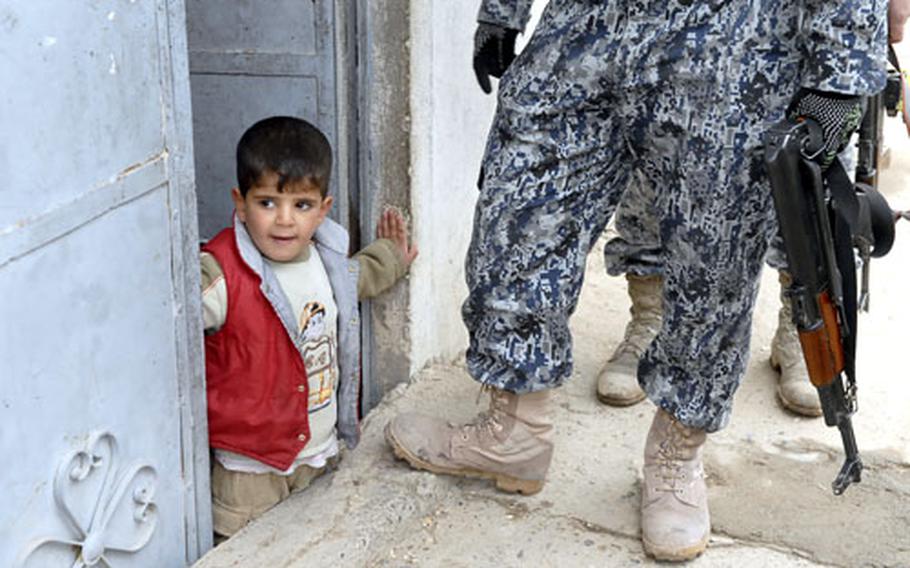 An Iraqi child peeks out at a joint patrol of Iraqi National Police and U.S. soldiers in Mosul. (Heath Druzin / S&S)

Twin attacks on Iraqi checkpoints had left one of the general&#8217;s men with a bullet in his arm, and responding U.S. soldiers found themselves sprinting for cover amid the clatter of AK-47s and the crack of sniper fire.

It was an unremarkable attack for this bullet-pocked city, where six American soldiers and two of their translators have been killed since early February. As the U.S. pushes an offensive that commanders say could be the last big battle of the war if successful &#8212; or deal a body blow to Iraq&#8217;s fragile democracy if it fails &#8212; they are contending with determined fighters and a populace that overwhelmingly wants the U.S. to leave immediately.

Iraq&#8217;s third most populous city largely flew under the radar for much of the war, as hot spots such as Baghdad and Anbar and Diyala provinces descended into chaos. U.S. military officials say because the so-called "surge" focused on central and western Iraq, insurgents were squeezed north to heavily Sunni Arab Mosul, where there was a lighter troop presence.

While violence has dropped dramatically in most of the country, Mosul is seen by many as the last urban stronghold of the insurgency.

The U.S. is in the midst of Operation Ninevah Resolve, a months-long, house-to-house effort aimed at beating back the Mosul insurgency for good by June 30, the deadline under the U.S.-Iraqi security pact for troops to pull back from Iraqi cities and towns. President Barack Obama has said he plans to pull all "combat" troops from Iraq by August 2010.

Economic and civil improvements for Mosul, where unemployment runs as high as 80 percent, are components of the operation, but the focus now is security.

"We can have all the projects we want, but if we fall back on the security element, then it won&#8217;t happen," said Col. Gary J. Volesky, who is the commander of the 3rd Heavy Brigade Combat Team, 1st Cavalry Division and oversees operations in Mosul.

"It stunts the growth of the entire nation," said Lt. Col. Thomas Cippola, responsible for operations in some of Mosul&#8217;s most dangerous neighborhoods.

U.S. commanders often talk of gaining public backing as critical to counterinsurgency operations. But it appears the soldiers fighting for Mosul are going into battle without the support of the people: In interviews across the city, there was near unanimous agreement that the Americans should go.

Many residents want only Iraqis to handle security, to show respect for the country&#8217;s sovereignty. And some say the U.S. presence actually makes the city more dangerous by offering more targets for bombers.

"Everywhere the Americans go they get (attacked)," said Sulah Ahmed Azam, a baker in the Shadad neighborhood.

Even some in the Iraqi military want the Americans gone.

"The coalition forces, they haven&#8217;t done anything bad to the people, but the truth is anyway that they came to invade Iraq and the people don&#8217;t like it," said Iraqi 1st Lt. Asad Mehsin, who works closely with U.S. soldiers. "My viewpoint: I would like them to leave. You&#8217;re American, would you like Russia to invade your country?"

Some residents are less diplomatic.

The buzz of the Saddam neighborhood&#8217;s open-air fruit market lurched into silence when a group of American and Iraqi soldiers walked in during a recent patrol. All eyes were on the unwelcome visitors, whom the vendors blame for forcing them to move from the neighborhood&#8217;s main shopping district (U.S. officials say some fruit sellers support insurgents).

Yet the same commanders who emphasize the importance of winning over the populace downplay the effects of this overwhelming lack of support.

Squares of bombed-out rubble checker the city, and trash piles up in the street, rotting in the sun and picked at by ragged livestock.

"Here it&#8217;s very bad. They behead people, make car bombs," said a retired Iraqi army officer living in the Al Amel neighborhood, who asked that his name not be used because of fear of reprisals.

Similarly, a college student who lives on the edge of the Tal Al Ruman neighborhood, seen by U.S. commanders as one of the most dangerous in the city, said people in the neighborhood are in constant fear of insurgents.

"Sometimes they see somebody planting a bomb but they can&#8217;t tell anybody (for fear of being killed)," the student said.

Amid this hostile landscape, U.S. and Iraqi forces are working side by side, sharing sensitive tips and surveillance to rid the city of militants.

While U.S. troops are still routinely targeted, Iraqi forces, who often lack sophisticated armor and weaponry, are now feeling the brunt of the bombs and the bullets.

As part of the push, the Iraqi army is setting up outposts &#8212; many no more than a tent surrounded by sand-filled barriers &#8212; in troubled neighborhoods. Thousands of Iraqi soldiers and National Police officers swarm the streets of Mosul daily.

Americans at least check in with Iraqis before conducting patrols, which are normally a joint effort these days. As is the case in much of the country, though, "Iraqi-led" operations in Mosul often mean an Iraqi physically in the lead but taking cues from U.S. troops.

According to Baha Hussein Abed, the general who declared Mosul secure, the soldiers he oversees still need the guidance.

"The Iraqi army is not ready to be on its own," he said.

Cippola said he is confident the operation will tame Mosul by the end of June. If not, the burden on an already fragile Iraqi government, still struggling to provide even basic services to its people, could be crippling.

"As many problems as we have in America, we are not dealing with an active insurgency," he said.