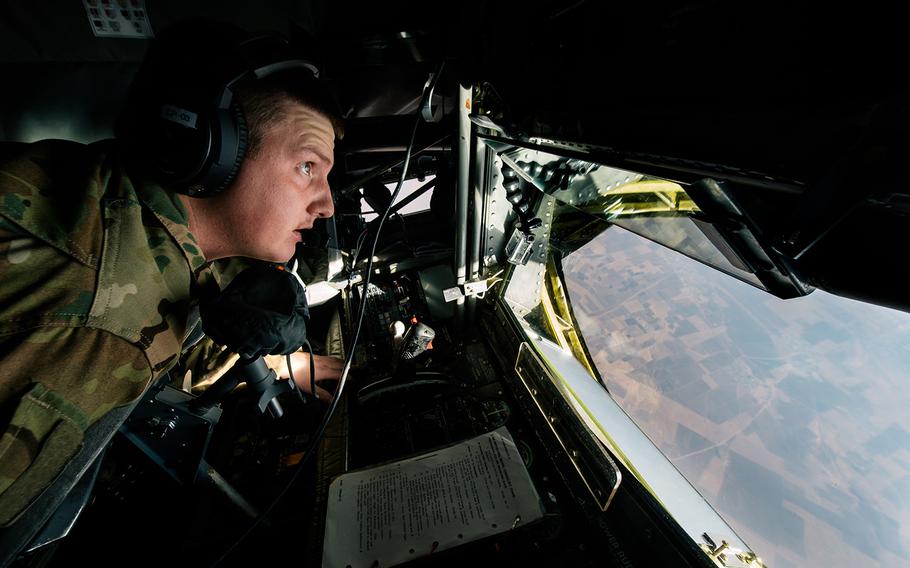 WASHINGTON — The disabling of four key bridges traversing the Tigris River in central Mosul appears to have limited the Islamic State group’s abilities to launch suicide attacks on Iraqi forces working to liberate the eastern portion of the city, a British general said Wednesday.

“Damage to the bridges has made it harder for [the Islamic State group] to flow ammunition and fighters across the river,” Jones told reporters at the Pentagon. “… We are confident that we are beginning to see a reduction of the amount of suicide attacks on the Iraqi security forces.”

That could speed up progress that has slowed in recent weeks as the fighting has grown steadily fiercer.

Iraq’s elite Counter Terrorism Service has encountered stiff resistance inside Mosul’s city limits, where the Islamic State group has had two years to prepare for an eventual assault.

Suicide attacks with truck bombs have been among the most effective tactics the terrorists have used against the Iraqi forces in the door-to-door fighting in recent weeks, Jones said. Those attacks have led to large numbers of casualties and a slowdown in the progress of the fight to oust the terrorist group from its last urban stronghold in Iraq. The Iraqi government does not release casualty data.

Jones said fewer truck bombs have been launched at troops in the week since the third and fourth bridges were disabled.

Only one bridge across the Tigris River remains intact in Mosul, causing concerns among some human rights groups watching the military assault of the city, where as many as one million civilians remain. The International Organization for Migration expressed concerns that disabling the bridges could trap civilians as the fighting moves west. According to the United Nations, at least 74,000 people have fled the city since fighting began, though the Iraqi government has asked them to remain in their homes through the battle.

But Jones said it was militarily necessary to disable the bridges. Iraqi Prime Minister Haider al-Abadi had initially hoped to leave them intact, but he eventually ordered the strikes.

“He had little choice but to disable those bridges to prevent [the Islamic State group] from using them,” the general said. “And that is exactly what we have done on his behalf.”

The bridges were not destroyed, and they should be rendered useful again with basic construction once Mosul is returned to the Iraqi government, Jones said.

Despite the high casualty rate of Iraq’s Counter Terrorism Service inside Mosul, Jones said the coalition has remained confident in the group’s ability to spearhead the fight through the remainder of the city.

“They are very firmly in the fight. They are pressing on, and they remain confident and determined,” he said.

The assault on Mosul, which was launched Oct. 17, is expected to take at least several more weeks, if not months. Jones said the operation has largely gone as the Iraqis planned it.

The entire city is now surrounded by forces controlled by the Iraqi government, he said. The Islamic State group cannot move fighters or supplies between Iraq and Syria.

“We expect the pressure on [Islamic State group] will just continue to increase, and their resistance will begin to wane,” Jones said. “This is not a race, and patience is required. But we are confident in [the terrorist group’s] defeat in Mosul.”