CNO: If brief, Syria operation would not require budget adjustments 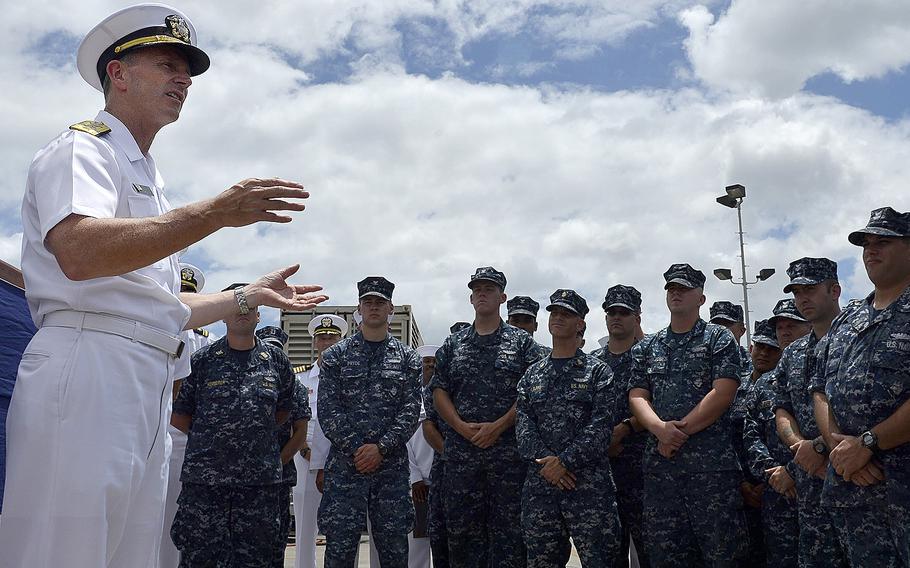 WASHINGTON — If the United States launches a quick series of strikes against Syria later this month, it won’t throw a wrench into the service’s budget because ships, planes and missiles are already in place using current funding, Chief of Naval Operations Adm. Jonathan Greenert said Thursday.

But the budgetary situation could change if an engagement with Syria – which President Barack Obama says is necessary to send a message about chemical weapons use, and which Congress is weighing – drags on into the new fiscal year in October, Greenert said.

If there’s a longer-term operation, the Navy may need the Pentagon to request an appropriation from Congress to fund the conflict, he told an audience at the American Enterprise Institue, a conservative Washington think tank.

“A supplemental might be the order of the day,” Greenert said.

Keeping an extra carrier strike group in the region at a high operational tempo would cost about $40 million a week, he said. Destroyers, which would launch the Tomahawk cruise missiles most observers think would be the main weapon against Syria, meanwhile would require about $2 million a week.

Each Tomahawk launched would ring the bill up about $1.5 million higher, he said.

Greenert added that he doesn’t know what form an attack on Syria would take, because such planning is being done at U.S. Central Command.

Beyond a special appropriation from Congress, there are other potential funding mechanisms for a longer engagement: Budget reprogramming would allow the Navy to take money from investment accounts to fund operations. Using “Forward apportionment,” the Navy would borrow from itself, spending money budgeted for later in the year in the first quarter.

Despite Syria and other flare-ups – as well as automatic budget cuts brought on by sequestration – Greenert said the United States strategy to rebalance its military forces to the Pacific is proceeding, though slower than planned.

More ships, submarines, aircraft and troops will be headed to Asia, even though sequestration slashed $11 billion from the Navy’s budget in 2013 and will take $14 billion in 2014 if elected leaders don’t agree on a way to detrigger the federal law that requires the automatic budget cuts.

But for now, budget cuts have reduced the Navy’s worldwide ship deployments to about 95, he said.

“We were at 105 deployed about a year ago,” he said. “And that is a factor of this last year – of the budget limitations that we’ve had.”