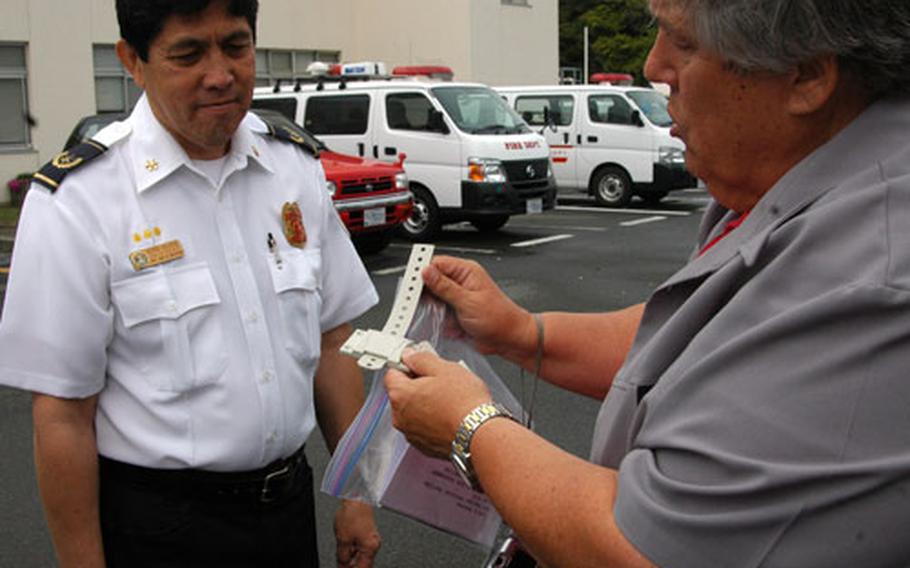 YOKOSUKA NAVAL BASE, Japan &#8212; Fire departments have more things to worry about than just putting out blazes.

In Japan, one of those things is earthquakes.

According to Tarver, CNFJ&#8217;s fire department had been working on funding the $78,000 unit since 2004. Today, it is the only Department of Defense fire department to have a kinetic earthquake simulator.

&#8220;It&#8217;s one of the visions of our department to be able to provide training for all hazards,&#8221; said Tarver, who became the first DOD person honored as Fire Chief Magazine&#8217;s Fire Chief of the Year in September.

The simulator can be towed to schools and area housing complexes to teach people how to respond when the earth starts shaking.

The unit can simulate temblors up to 8.0 in magnitude, according to Charles LeFever, director of safety for ETC Seismic Mitigation Co., the company that built the unit.

It is powered by a generator and can be towed to just about any training site as easily as a camping trailer. Inside, three people at a time experience the feel and sound of an earthquake. Mounted filing cabinets and a flat-screen TV show what to expect during a quake.

The fire department also recently added a mobile training trailer equipped to resemble the interior of a small apartment to teach fire prevention.

The trailer has smoke machines that demonstrate the importance of fire detectors and knowing how to get out of a home when you can&#8217;t see where you are going, said CNFJ Fire Prevention Chief George Salcedo.

&#8220;This trailer is particularly relevant because it simulated an unattended cooking or grease fire,&#8221; Salcedo said. &#8220;Since January 2008, this fire department has responded to six unattended cooking fires. We are trying really hard to teach children what to do in an emergency.&#8221;

For more information on securing your home for an earthquake, visit www.safe-t-proof.com.

What to do during and after an earthquakeHousehold items can become missile hazards flying as fast as 35 mph during an earthquake, warned Commander Naval Forces Japan Chief Fire Inspector Yuko Hasegawa.

During an earthquake, Hasegawa said, people should drop to the ground, find cover under a sturdy table or other item and hold on tight until the shaking stops.

After a quake, it is important to stop and look for any fires or ruptured water and gas lines, he said.

Listen for the hissing sound of steam or gas and pay attention for any unusual odors that might indicate a ruptured line, he said.