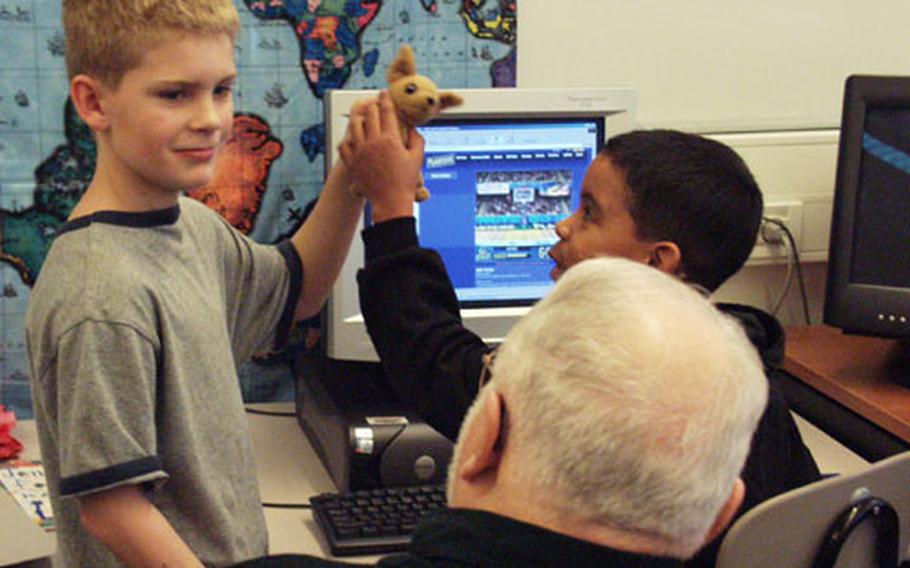 Joseph Douglass, a counselor at Aviano Elementary School in Italy, watches third-graders Cameron O&#39;Steen, left, and Travis Matt during a recent lunch-hour visit to the Clubhouse. The school set up an extra classroom as a place for children of deployed servicemembers to send e-mail, play or talk about any problems they might be having during the deployment. (Kent Harris / S&S)

Joseph Douglass, a counselor at Aviano Elementary School in Italy, watches third-graders Cameron O&#39;Steen, left, and Travis Matt during a recent lunch-hour visit to the Clubhouse. The school set up an extra classroom as a place for children of deployed servicemembers to send e-mail, play or talk about any problems they might be having during the deployment. (Kent Harris / S&S) Tyler Wine shows off the identification card that allows him access to the Clubhouse, a place at Aviano Elementary School in Italy where children of deployed servicemembers can hang out. (Kent Harris / S&S)

AVIANO AIR BASE, Italy &#8212; Having a parent deployed for a long stretch can be tough on a kid.

Especially when that parent is a big help with homework.

That&#8217;s the case with Tyler Wine, whose father, Senior Master Sgt. James Wine, has been deployed for several months. But the third-grader and dozens of other pupils at Aviano Elementary School have been receiving special attention lately.

Faced with a series of large deployments on base, the school set up the Clubhouse &#8212; a converted classroom where qualified pupils can send e-mails, play games and talk to one another during lunch hours.

A school counselor, the school psychologist or one of the two school administrators is always on hand. Principal Melissa Klopfer said the specialists can act as a sounding board or provide individual or group counseling if needed.

So formal counseling sessions aren&#8217;t on the agenda. Instead, counselors just watch children while they&#8217;re playing or sending messages to their deployed parents. Klopfer said the atmosphere is less intimidating than a formal one-on-one counseling session.

Not that most of the children seem to even notice the adults are around. The Clubhouse is open only during lunch periods. Pupils are told to eat lunch first, then visit afterward. They are issued identification cards, granting them &#8220;membership.&#8221;

Tyler says he visits &#8220;every time it rains.&#8221; Like other members, he occasionally brings along a friend.

A bank of computers has been installed in the classroom, and pupils have been given e-mail accounts so they can communicate with their deployed parents. There are also board games. A tent has been set up in the middle of the room. No campfires, though.

Klopfer said the school decided to try the concept after there was some concern that it hadn&#8217;t done enough for children of deployed servicemembers in the wake of a large deployment in 2002. Currently more than 700 active-duty servicemembers &#8212; composed largely from the Air Force&#8217;s 603rd Air Control Squadron and 510th Fighter Squadron and the Army&#8217;s Company B, 5th Battalion, 158th Aviation Regiment &#8212; are deployed to southwest Asia.

The 555th Fighter Squadron is scheduled to replace the 510th on the next rotation. So Klopfer said the school plans to keep the Clubhouse open through the rest of the school year.

Children who have parents deployed elsewhere are also eligible to join. And they can generally visit awhile after their parent returns.

For third-grader Cameron O&#8217;Steen, that should be only a few weeks. He said he&#8217;s been counting the days until his father, Staff Sgt. John O&#8217;Steen, returns from the desert.

But Cameron said he&#8217;s enjoyed hanging out at the Clubhouse. And he&#8217;s been helping Mom take care of his 2-year-old sister, Kaylin, at home.

The school hopes that the Clubhouse is making at least part of his life a little easier.