Club hosts walk for Kadena dogs and their humans 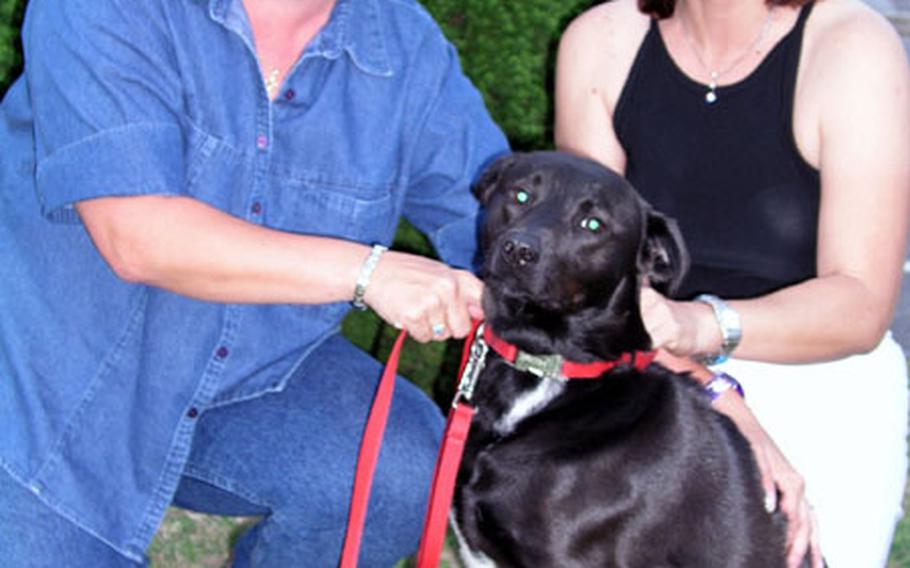 Jimi Parker, left, and Daisy Geiser, seen here with Parker&#39;s dog, Shiawase, are two of the six founders of the Okinawa Canine Club, established in May 2003. One of the club&#39;s major activities is to provide dog obedience classes to train dogs and their owners. (Chiyomi Sumida / S&S)

The Okinawa Canine Club will host a dog walk Saturday at Kadena in what it hopes will become a monthly opportunity for dogs and their owners to have an enjoyable weekend morning together.

The only requirement for participation is to show up at the parking lot of the Wakaba Child Development Center at 10 a.m.

And be sure to bring along your best friend.

The Okinawa Canine Club is a nonprofit organization sponsored by 18th Services Squadron, according to Daisy Geiser, an Air Force servicemember&#8217;s wife and one of six who founded the club in May 2003.

Geiser, a certified dog trainer, said the club&#8217;s major activity is providing dog obedience classes to all Americans connected with the U.S. military on Okinawa.

Puppy classes, basic obedience and canine good citizen classes all are held Sunday afternoons on the air base.

&#8220;And the dog then becomes a nuisance to the family,&#8221; she said, often resulting in the pet being left behind when the family is reassigned to the states.

The Okinawa Canine Club offers advice and support as a public service to help prevent such problems, said Jimi Parker, a board member of the club.

Parker, an Army servicemember&#8217;s wife, adopted a rescued puppy, a mixed breed, about a year ago. She and Shiawase, which means &#8220;happiness&#8221; in Japanese, completed some obedience classes. Now, she said, people who see the two of them out for a walk are quick to comment on the dog&#8217;s well-behaved public manner.

She recalled the day Shiawase, minus leash, slipped out of the front door of their Kadena Air Base residence and ran to explore the great outdoors.

However, it took just one simple command to save the family from hours of searching for the stray pup.

Saturday&#8217;s canine walk will be a great opportunity for dogs to socialize and for their owners to get together with people who share a common interest, said Parker.

The event will be canceled if it is raining by 9:30 that morning, organizers said. Dogs are required to be on a leash, they said; owners are required to bring enough drinking waterfor their dogs, and enough plastic bags to pick up after them.

Contact the club at DSN 633-1734 or visit the Okinawa Canine Club&#8217;s Web site at www.okinawacanineclub.com for more information.