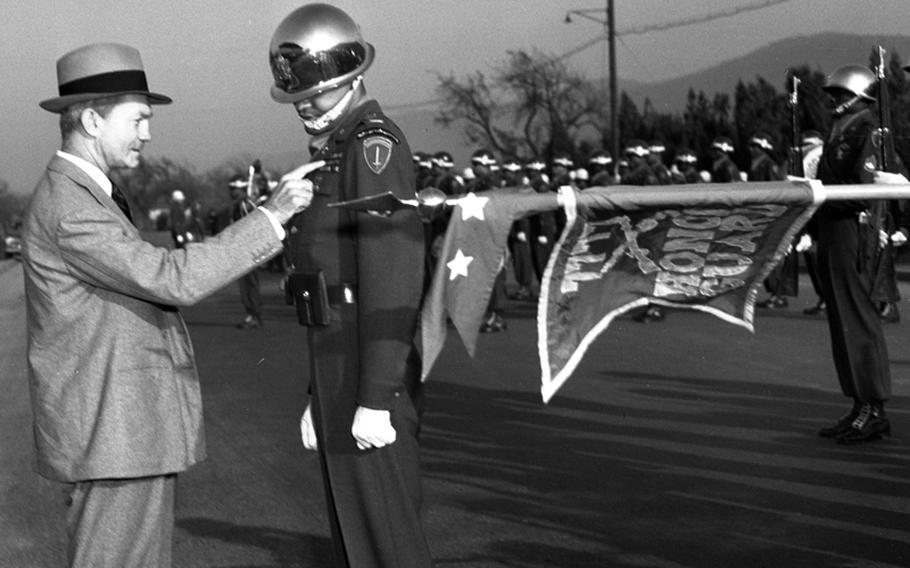 Buy Photo
The U.S. Army's decades-old presence in Heidelberg drew nearer to a close with Friday's announcement that the timetable for closure of U.S. Army Garrison Baden-Württemberg has been moved up a year. In a scene from the Stars and Stripes archives. James V. Forrestal -- the nation's first secretary of defense -- asks a member of the 7777th Honor Guard about his decorations during a review at Heidelberg in November, 1948. (Stars and Stripes)

HEIDELBERG, Germany &mdash; U.S. Army Garrison Baden-W&uuml;rttemberg and all its services will be closed next fall, a year sooner than most recently planned, officials said Friday.

The post exchange, commissary, banks and all base housing will be closed by the end of September 2013, garrison commander Col. Bryan DeCoster said at a town hall meeting Friday. The reason, he said, was a U.S. Army Europe order that its personnel in Heidelberg and Mannheim be relocated by Aug. 30, 2013, and the realization that the garrison could not provide acceptable services to a dwindling population.

According to officials, some 18,000 people &mdash; troops, civilians and their families &mdash; will be relocating from the Heidelberg and Mannheim areas over the next year, moving to Wiesbaden, Kaiserslautern and, for several hundred, Baumholder.

&ldquo;Clearly we save money,&rdquo; DeCoster said of the closing. &ldquo;But if it was just about the money, DOD would find the money. This is about quality of life.&rdquo;

All of the Mannheim housing area will also be emptied by then, DeCoster said. Spinelli, Coleman and Funari barracks, where the Army has warehouses, a jail and a network operations security center, respectively, will remain open &mdash; but only as work sites &mdash; until new facilities elsewhere are arranged.

The accelerated time line is the latest adjustment to the process of the Army&rsquo;s downsizing in Europe and the move of U.S. Army Europe headquarters from Heidelberg to Wiesbaden, a process that began some eight years ago.

In 2010, U.S. Army Europe officials projected that major closures in Heidelberg would happen between 2014 and 2015, and it was expected that the post exchange and commissary would remain open into 2014.

DeCoster said that previous closures in the Mannheim military community had shown the difficulty in providing services as soldiers and families moved away and, because of that, services staffing levels dropped. &ldquo;About the last six months at Ben Franklin Village, it became a real ghost town,&rdquo; he said. &ldquo;But people could drive for 20 minutes to Heidelberg for services.&rdquo;

But when Heidelberg shutters its facilities, the closest remaining bases will be Wiesbaden or Kaiserslautern, about an hour&rsquo;s drive from Heidelberg.

&ldquo;Civilians and troops without children, if you have the capability to move next spring, we encourage you to do that,&rdquo; he said. &ldquo;If you make the choice to stay here &hellip; just do that with your eyes open. Come 30 September [2013], there will not be logistic support.&rdquo;

Families with children in school should make plans to move when school lets out next summer.

DeCoster said that the garrison would be able to meet the crush of thousands of people moving in a short time period.