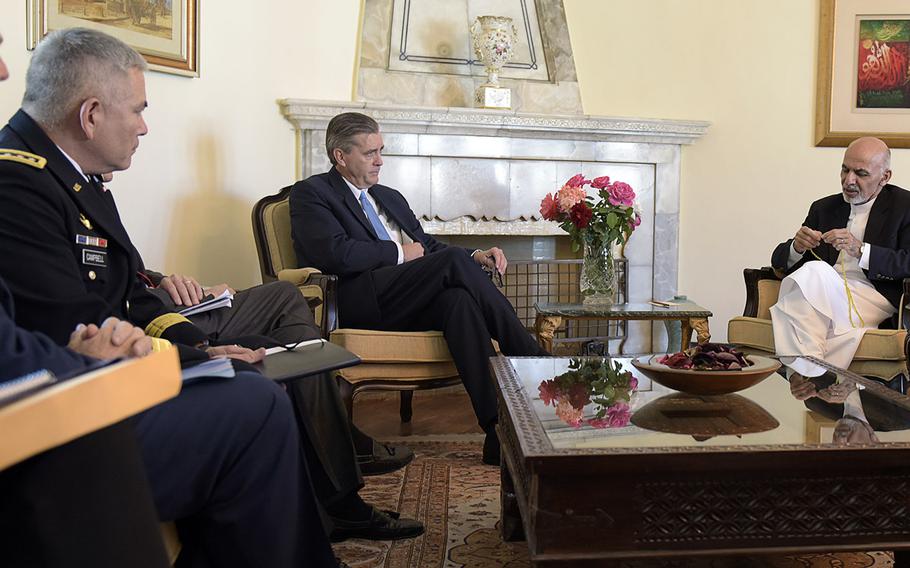 Gen. John F. Campbell, at left, meets with Afghan President Ashraf Ghani on Oct. 3, 2014 at the Presidential Palace in Kabul. Campbell is reported to have become a close adviser to Ghani. (Richard D. Sherba/U.S. Army)

KABUL, Afghanistan — The new political landscape in Afghanistan has served to mute the official furor over the deadly U.S. attack this month on a hospital in Kunduz, an incident that in the past might have caused a crisis in relations between Kabul and Washington.

Since the furor over previous civilian deaths in U.S. airstrikes, much has changed. The Taliban are on the offensive, the U.S. troop presence has been greatly reduced, and Afghans have a new and more amenable president. In the wake of the Taliban’s recent successes, the current Afghan leadership realizes it needs continued U.S. military support to keep the insurgents at bay.

“I think at the political level there is a real concern that they don’t want to do anything to jeopardize the relationship with the United States, so that’s why you don’t see vocal public statements,” said Emily Winterbotham, a research fellow at the Royal United Services Institute in the United Kingdom.

The U.S. and Afghan governments say they are still investigating what exactly happened early in the morning on Oct. 3, when an American special operations AC-130 gunship devastated a hospital in Kunduz run by the nonprofit group Doctors Without Borders. At least 22 patients and hospital staff were killed.

The attack sparked global condemnation from many international organizations. In Afghanistan, however, there have been no major public protests nor formal complaints from President Ashraf Ghani.

The absence of public outrage is in sharp contrast to the way Ghani’s predecessor, Hamid Karzai, would react to civilian deaths at the hands of the Americans.

“Karzai would get really angry over civilians’ deaths,” said an Afghan army major in southern Kandahar, who asked not to be named because he wasn’t authorized to speak to the media. “But now, even a hospital was bombed, yet there wasn’t a strong reaction by the government.”

The airstrike in Kunduz comes at a sensitive time for Ghani’s administration. He has sought to forge closer ties with the West and to overcome the ill-will left behind by Karzai’s outspoken criticism of the American war effort. At the same time, the Taliban offensive has undermined public confidence in the government and its security forces, who are now in the lead on the battlefield since the end of the NATO combat mission last December.

The decision was welcomed by Ghani, who had been lobbying for U.S. and international forces to extend their current mission to train and advise Afghan forces. The Afghans have struggled since taking over sole responsibility for security.

Ghani’s reliance on what remains of the American presence is illustrated by his relationship with the top American commander in Afghanistan, Gen. John Campbell. He is reported to have become a close adviser to Ghani by conferring with him in person and on the phone.

Some Afghan defense officials as well as soldiers on the ground have tempered criticism of the U.S. airstrike on the hospital, fearing that the Americans will become more cautious about when they launch airstrikes, which are supposed to be undertaken primarily in defense of U.S. and NATO personnel.

“It will be a big problem if they leave Afghan security forces alone now,” said Naqibullah Mohabat, a member of parliament and former army general. “Foreign forces must help until Afghanistan gets a strong air force. Not only Taliban, but you also have Daesh now in Afghanistan, so Afghan forces cannot handle them alone.” Daesh is a derogatory term for the Islamic State group.

That was an assessment echoed by the army major in Kandahar.

“Right now, we can always ask for help from the foreign forces, especially for airstrikes, so it will be a big problem if they stop cooperating,” he said. “There is a huge need for this and I think the foreign forces better understand that.”

While Afghan troops reported that the U.S. had curtailed airstrikes in Kunduz itself, it has continued to carry out strikes across the country. Since the hospital attack on Oct. 3, American warplanes have conducted approximately 75 airstrikes, the vast majority of which occurred from Oct. 8-11 during a major operation against suspected al-Qaida training camps in Kandahar, according to U.S. military spokesman Col. Michael Lawhorn.

Another reason criticism may be relatively muted is the still unclear role of Afghan security forces in the attack. “Because Afghan forces called for the airstrike, the government cannot show anger over their own mistake,” said the Afghan officer.

Both the American special operations troops and the Afghan commandos involved in the operation had little experience working together, The New York Times reported on Wednesday.

“It looks like there were mistakes on both sides,” Winterbotham said. “So there might be an understanding between the two countries at the higher levels.”

Afghan security officials have repeatedly stated that Taliban fighters were operating from the hospital, and American leaders have said that enemy fire was detected in the area.

Hospital officials, however, reject suggestions that insurgents were allowed to use the hospital as a base, and witnesses there at the time say no fighting was occurring nearby. A senior Afghan security official told the Times that investigators have found no evidence of hostile fire from the hospital that night.

“There is no reason that the Kunduz hospital should have been bombed,” Mohabat said. But like many Afghans interviewed, he quickly aimed his criticism at the Afghan forces suspected of requesting the airstrike. “The president needs to clarify that and punish those Afghans who gave wrong information.”

While the United Nations says the U.S. and its allies have worked to lower civilian casualties, deadly airstrikes have cast a long shadow over the American war in Afghanistan.

Some past incidents have exacted higher death tolls than at the hospital in Kunduz, including a strike on an engagement party in 2002 that killed as many as 48 people. That attack led to the first public rift between the Afghan government and its American backers. Other instances include a set of airstrikes in 2008 in Herat province that killed 90 civilians, including 60 children, and a 2009 strike in Kunduz that reportedly killed more than 90 civilians.

As in the past, it is unlikely that the latest strike against civilians in Kunduz will mean an end to American use of airpower in the country, Winterbotham said.

“There will be an examination of how it happened and how to prevent such incidents in the future, but this isn’t the first time,” she said. “The reality is that airpower is often a determining factor in the fight in Afghanistan so it would be very hard to do away with it altogether.”