Close to combat, yet far away 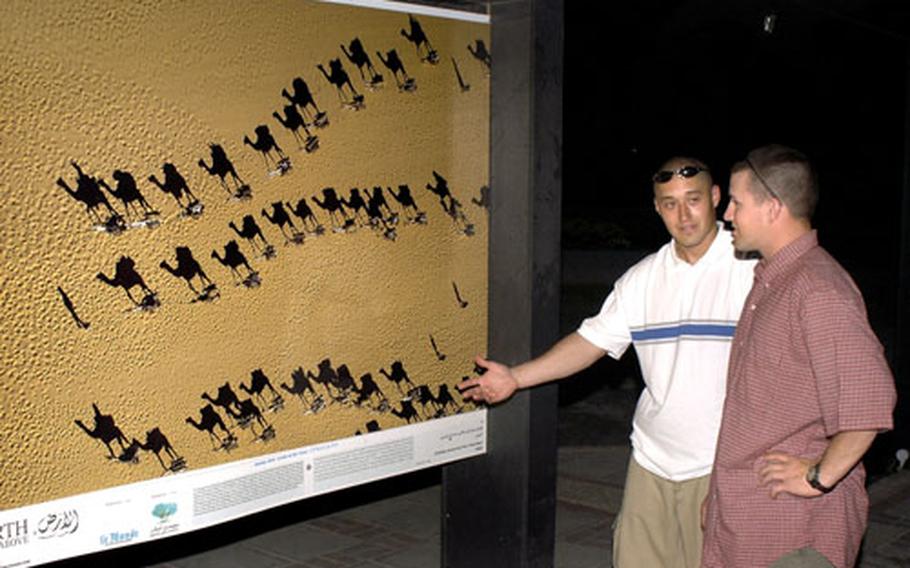 SPC John Clever, right, and SPC Joshua Fritz, of the 389th Engineer Support Company, discuss a piece from the Earth from Above exhibit. The display was one of the many activities taken in by these soldiers during their R&R in Qatar. (Fred Zimmerman / S&S)

SPC John Clever, right, and SPC Joshua Fritz, of the 389th Engineer Support Company, discuss a piece from the Earth from Above exhibit. The display was one of the many activities taken in by these soldiers during their R&R in Qatar. (Fred Zimmerman / S&S) 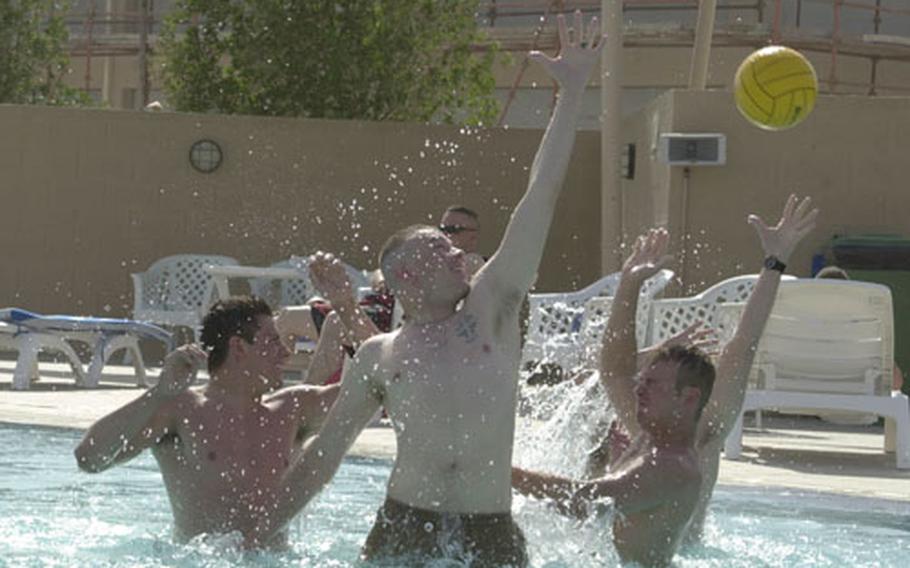 Members of the Army National Guard&#39;s 45th Infantry Brigade, based out of Oklahoma, play in the pool at Camp As Sayliyah, Qatar. The unit is currently serving in Afghanistan, but these troops were able to get away for four days of fun provided through the Fighter Management Pass Program. (Fred Zimmerman / S&S) 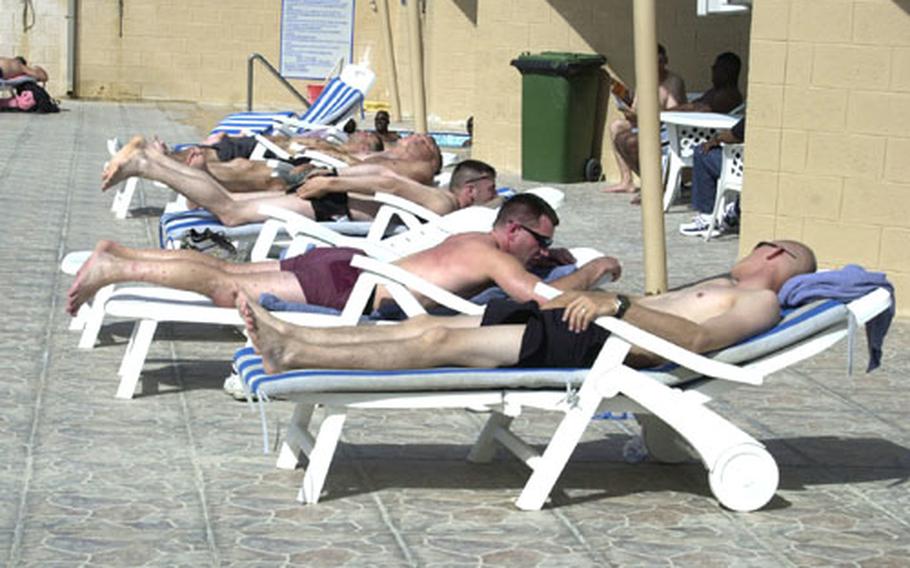 Servicemembers catch some rays while enjoying their four days of rest and recuperation on Camp As Sayliyah, Qatar. The pool is one of the more popular spots for those participating in the Fighter Management Pass Program. (Fred Zimmerman / S&S) 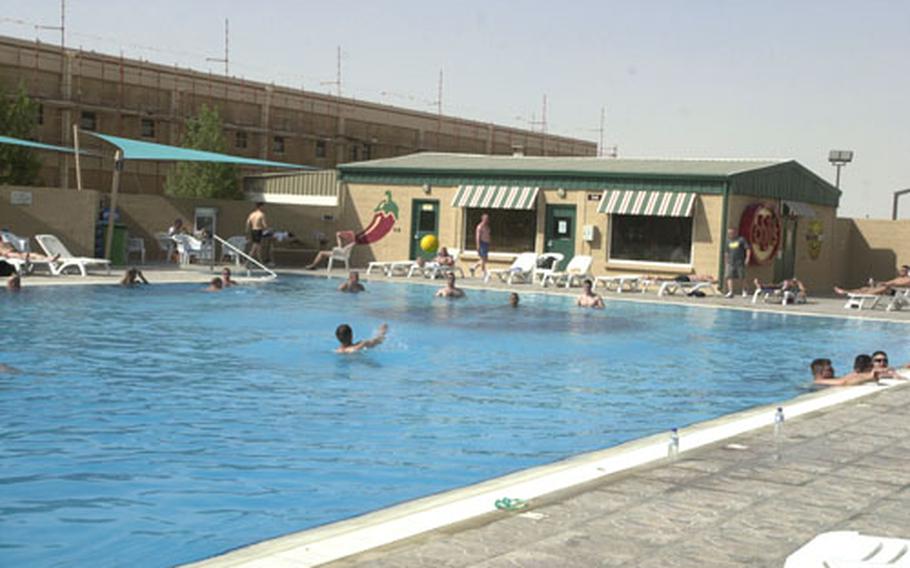 In addition to the Olympic-sized swimming pool, the Chili&#39;s restaurant is also a popular spot for those resting and recuperating on the four-day Fighter Management Pass Program. (Fred Zimmerman / S&S) 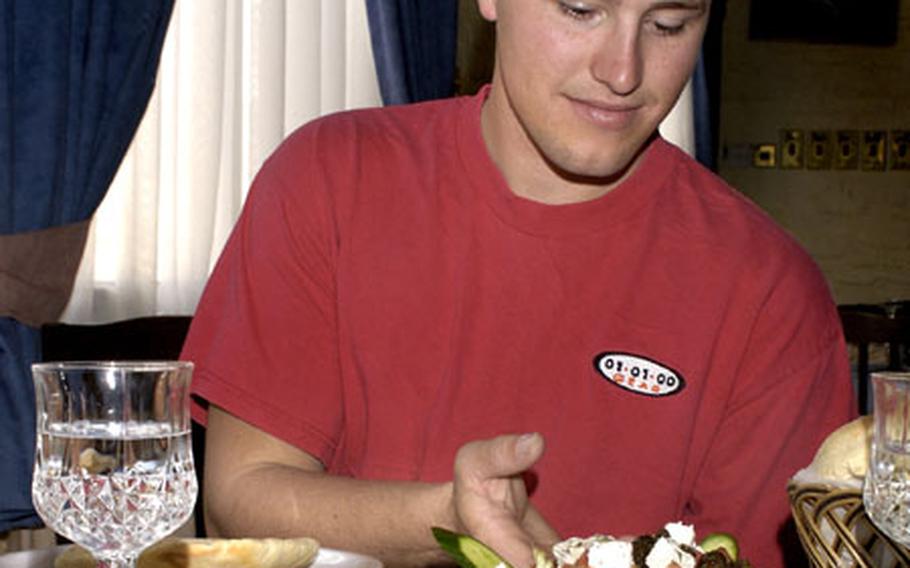 Whether it&#8217;s the constant fear of the unknown, continuous sounds of gunfire or bombs, or

having to deal with losing a buddy, sometimes troops just need to get away, no matter how short or long.

On a daily basis, tired, worn-out troops can be seen getting off buses here, ready to take a break.

They arrive in dusty desert camouflage uniforms, but soon shed them for clean civilian clothes as they begin their four days of rest and recuperation in the Fighter Management Pass Program.

More than 42,000 servicemembers have come and gone through the program, in place since July, according to Army Master Sgt. Ellie Walbridge, the program&#8217;s Morale, Welfare and Recreation supervisor.

Once units have been in Iraq or Afghanistan for three months, they can send troops, Walbridge said.

Up to 180 servicemembers arrive nightly, Walbridge said. As soon as they walk through the door, she said, her staff&#8217;s goal is to instantly put the troops at ease. Walbridge has 11 soldiers from the Wisconsin National Guard&#8217;s 232nd Adjutant General High Headquarters Detachment helping her.

As the new arrivals walk into the reception area, they are told to drop their bags and head into the briefing room, where there are plenty of chips and sodas to be had.

During the briefing, the troops are given the do&#8217;s and don&#8217;ts, and told what the base has to offer them. They&#8217;re told that chaplains are on call 24 hours a day for those that may need to talk. And that there&#8217;s a medical clinic on the camp that can help them take care of things they haven&#8217;t had time to get looked at.

After the briefing, they are given bedding and assigned a place to sleep.

While they may be away from the war, all E-6s and below still have to rough it by sleeping in tents, but these are set up in warehouses complete with air conditioning. All ranks above that get to sleep in &#8220;corimex&#8221; billeting &#8212; shipping containers that have been built as two-person rooms.

While they may not be staying at a resort, most said they don&#8217;t mind since there are no bullets whizzing by, and there are hot showers and toilets that flush.

Throughout the next several days, the troops can swim laps at the Olympic-size pool, or get a pedicure, manicure or massage at the gym. They can e-mail home, or better yet, talk to their loved ones in person for free on provided phone lines. There are also basketball, volleyball and tennis courts.

Troops also have numerous options when it comes to grabbing a bite to eat.

In addition to the dining facility, there is a Burger King, Subway and Pizza Inn. A Chili&#8217;s restaurant by the pool allows servicemembers to sit down for a meal. Most are also excited about being able to down a cold beer at one of the two clubs on base.

Along with what the camp has to offer, Walbridge said each servicemember is also given at least one chance to leave the base. There are six venues, or day trips, for which the troops can sign up. They venture out on those trips during their second and third full days here.

Even though Army Spc. Eric Hiltner, assigned to the 1st Armored Division, has spent the last 14 months in Iraq, he took a desert safari trip during his stay. He said a friend who had been here told him the trip was great. The entire trip wasn&#8217;t in the desert though, he said they ended the adventure on the beach and were able to swim in the ocean and have a barbecue dinner.

In addition to getting a nice tan by going to the pool as much as possible, Hiltner took a little time to pamper himself, getting a massage and manicure.

Hiltner added that he passed on the pedicure though because of extremely ticklish feet.

Sleeping wasn&#8217;t high on Hiltner&#8217;s agenda. He was enjoying himself so much, he didn&#8217;t want to waste any time sleeping. He said he and his friends would have some coffee and just walk around at night before finally getting about two hours of sleep. They would then head to the pool, which is open from 8 a.m. to midnight.

While Hiltner was trying to stay awake, Marine Cpl. Michael Dowling, from Marine Wing Support Squadron 273, said it was nice to sleep in.

Both Hiltner and Dowling said they were still thinking about their peers back in Iraq. Hiltner said he would&#8217;ve liked to have some of his friends here with him, but most of them have already made the rest and recuperation trip.

Dowling said he&#8217;s going to try to share his experience with his unit.

After three complete days, each group then meets at 4 a.m. the next morning and heads back to their unit. Walbridge said it&#8217;s tough to see the troops head back to the stressful environment, but she&#8217;s glad she and her staff could make a difference.