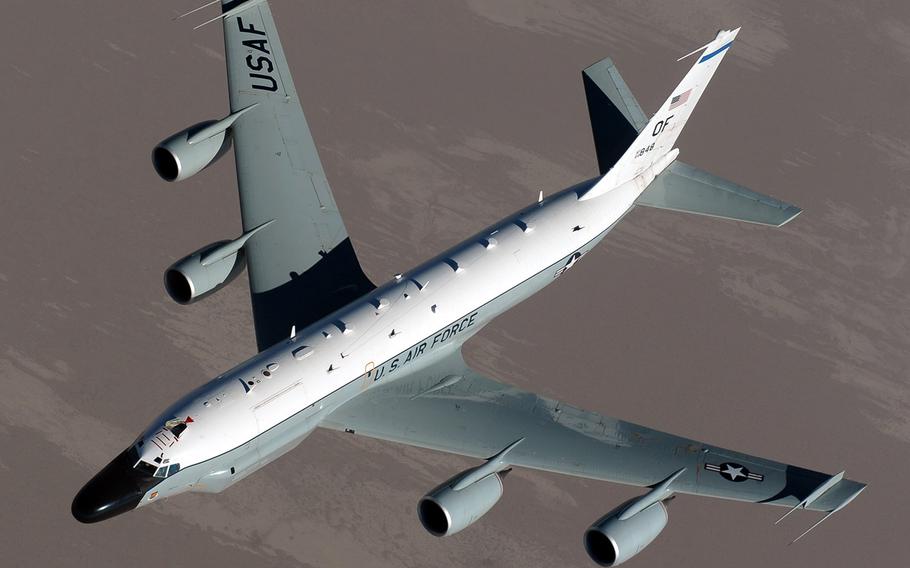 An RC-135 aircraft flies over Afghanistan in June 2011. A Russian fighter buzzed an RC-135 over the Black Sea on Monday, Jan. 25, 2016, in a close encounter that put the American aircraft at risk, U.S. military officials said. (U.S. Air Force)

A Russian fighter buzzed a U.S. reconnaissance plane over the Black Sea this week in a close encounter that put the American aircraft at risk, U.S. military officials said.

“On Monday, an RC-135 aircraft flying a routine route in international airspace over the Black Sea was intercepted by a Russian Su-27 in an unsafe and unprofessional manner,” said Navy Capt. Danny Hernandez, U.S. European Command spokesman. “We are looking into this particular incident.”

Hernandez declined to say exactly where the incident occurred, only that it happened over the Black Sea.

According to The Washington Beacon, the Russian fighter came within nearly 20 feet of the American RC-135, causing the U.S. plane to have control issues as the Russian aircraft maneuvered.

“Intercepts are not unusual, and they are normally routine events,” Hernandez said. “In this case it was obvious it was not routine. The Russian pilot put himself and the aircrew at risk.”

The event marks the latest encounter in a region where such provocations between Russian and western military jets and ships are becoming more commonplace. In past encounters, the U.S. and NATO have accused Russian pilots of acting recklessly, buzzing U.S. Navy and other alliance vessels patrolling the Black Sea.

The latest incident over the Black Sea comes as the U.S. and Russia attempt to improve airspace safety connected with military operations over Syria. On Thursday, the U.S. and Russia conducted a video conference to discuss the implementation of the U.S.-Russia memorandum detailing ways to ensure flight safety over Syria.

It was not immediately clear if Monday’s interception over the Black Sea was discussed between the two sides.