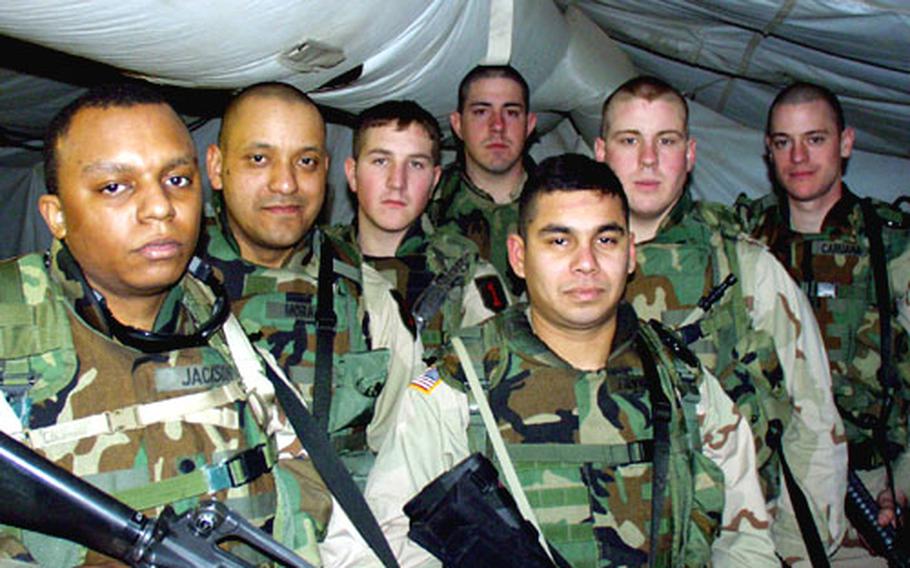 CAMP UDAIRI, Kuwait &#8212; For a few minutes last Friday, Pfc. Justin Patterson and his buddies from the 1st Squadron, 4th U.S. Cavalry, thought their charge to Iraq might end before it started, with a flash and a crash in the chill German night.

Patterson looked anxiously out the window as the chartered World Airways DC-10, loaded with 278 soldiers and mountains of battle gear, lumbered toward the end of the runway at the Nuremberg airport.

Just as the aircraft lifted off the runway, the passengers heard a loud bang from the engine under the left wing, then saw a burst of fire trailing behind.

The jumbo jet seemed to struggle into the sky, the soldiers said, but eventually climbed to a cruising altitude of 30,000 feet. The pilot had quickly shut down the damaged engine and extinguished the fire.

Cavalry troops pride themselves on their bravado, but they hardly expected this sort of catastrophe when they found out last summer they would be deploying to Iraq with the other Europe-based soldiers from the 1st Infantry Division.

The soldiers from Troop B and C kissed their families goodbye and clambered aboard buses at Conn Barracks in Schweinfurt, Germany, shortly before midnight Thursday for the 90-minute ride to Nuremberg. The Army has built a highly protected holding area at the airport through which some 12,000 1st ID soldiers will pass through on their way to the Middle East this month. Friday&#8217;s 1/4 Cavalry flight was the third of nearly 50 flights.

The evening had gone smoothly enough. The soldiers had gorged themselves on a catered midnight meal of roast beef, potatoes and corn. They rested on double-bunk cots in a carpeted rest area, then boarded the plane for the 3 a.m. departure. Already up almost 24 hours, many of the men drifted off to sleep &#8212; until the boom and the flash.

Three times as the plane shed fuel, it seemed to lurch to the right. Staff Sgt. Peter Caruana, 25, of Chicago, said he wondered each time if the plane was spinning into a final dive.

Maj. Sean Herron, the 1st ID&#8217;s transportation officer, said the plane landed safely just 21 minutes after it took off, although soldiers on the jet thought the flight lasted at least twice that long. They were surprised that the landing was rather uneventful, except for the firetrucks and ambulances lining the airfield.

Safely on the ground, the soldiers fell asleep in the bunks at the terminal and lounged in the Army&#8217;s new game room all day Friday. About 6:30 p.m., they jammed into more buses for a five-hour ride to Ramstein Air Base. There they boarded another World Airways jet. Patterson said he carefully noted the tail number to make sure it wasn&#8217;t the same one.

Before the second takeoff, a hush fell over the plane.

Caruana was taking nothing for granted.

They landed in Kuwait without incident and finally reached Camp Udairi about 10 a.m. local time Saturday, almost 36 hours after they left Schweinfurt. They&#8217;ll go through about two weeks of training before convoying north to Iraq, where &#8220;Quarter Cav&#8221; will spend the next year patrolling the dangerous Sunni Triangle north of Baghdad &#8212; with one unexpected adventure already under their belts.