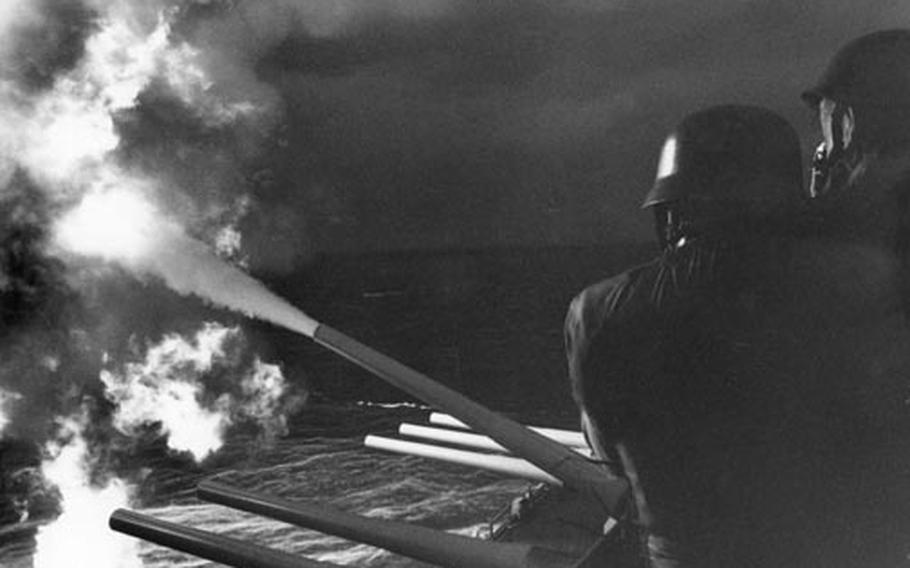 Buy Photo
The big guns of the USS New Jersey unload on targets in Vietnam in 1968. (Dave Preston/Stars and Stripes)

The world's only active-duty battleship fired her first mission of the Vietnam War Monday when she shelled Red gun sites and supply dumps along the northern fringes of the Demilitarized Zone. Clark and Morocco spotted the shelling.

The target was a Communist supply area dug into a tree-dotted plateau 12 miles inland. It was well defended by antiaircraft batteries. Heavy rain clouds forced the two aerial spotters to fly low to direct the New Jersey's gun crews.

"These guys (the North Vietnamese) were pretty bad shots," Clark said later. He piloted the A4 Skyhawk on the spotting mission. "They weren't leading us enough."

"Yeah &mdash; thank God," added Morocco, who radioed target coordinates to the battleship from the second seat of the A4. "They were shooting at us as we came in on the target, then more guns would pick us up as we came over the other side."

Clark, 31, who has only 46 more days remaining on his second hitch in the war, said the Red gunners were throwing up flak from 57mm and 37mm artillery and .50-cal. machineguns.

"They came close, but just never got us."

After destroying the supply dump, the battleship turned her 16-inch guns on the antiaircraft sites and knocked out four of them.

Clark and Morocco, 33, were enthusiastic about the New Jersey's debut.

"They put six rounds into an area about 75 yards square," said Morocco. "Right on the money. I radioed back, 'scratch off the target, it isn't there any more'."

The two Marines said. they had spent almost three months preparing for the battleship's entrance into the war and hadn't done much naval gunfire spotting until two months ago.