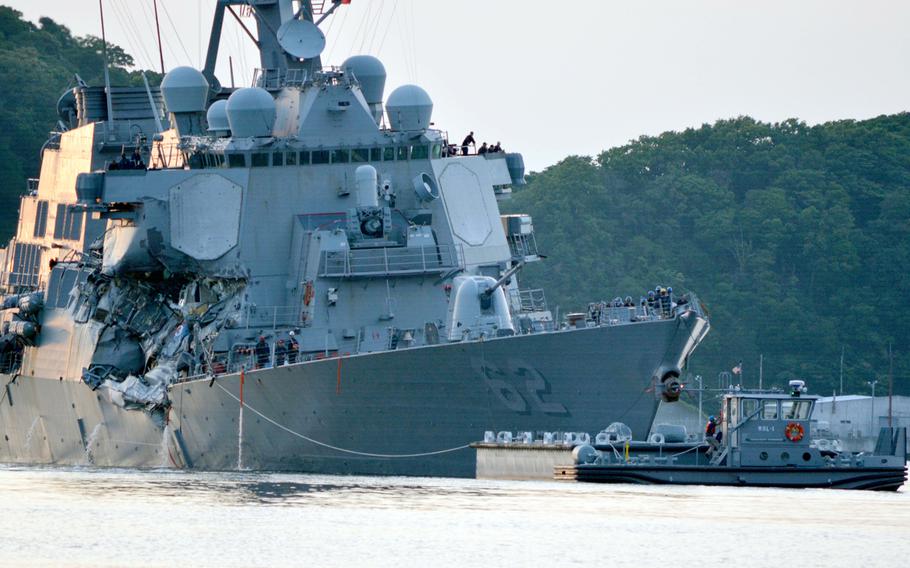 The guided-missile destroyer USS Fitzgerald returns to Yokosuka Naval Base, Japan, after a collision with a merchant vessel on June 17, 2017. (Peter Burghart/U.S. Navy)

YOKOSUKA NAVAL BASE, Japan — A serious review of a near miss by the USS Fitzgerald in May 2017 might have prevented a collision five weeks later that killed 17 sailors, according to a leaked naval investigation reported by a military newspaper.

The Navy Times this week published a series of articles on the Navy’s internal report of the Fitzgerald’s collision with an oil tanker near Singapore on June 17, 2017.

The Navy report, in part, criticized the failure to review the near miss, which happened May 10, 2017, near Sasebo, Japan.

Much of the Navy investigation centered on the earlier incident, according to the Navy Times.

The internal report described a junior officer becoming “confused by the surface contact picture” of ships near the Fitzgerald and calling the guided-missile destroyer’s then-commanding officer, Cmdr. Robert Shu, to the bridge, according to the newspaper.

Shu steered the destroyer behind a merchant vessel and left the bridge, according to the Navy Times. As the Fitzgerald passed by the merchant vessel’s stern, another ship was detected on the opposite side.

The report said an officer on duty “sounded five short blasts and ordered all back full emergency to avoid collision” and a potential crash was averted, according to the Navy Times. Shu was not on the bridge when the incident occurred.

In the Fitzgerald’s fatal collision five weeks later, Cmdr. Bryce Benson — who took over for Shu on May 13, 2017 — was also absent from the bridge but, unlike in the close call near Sasebo, no one sounded the blasts to alert surrounding ships, according to the post-collision report.

Rear Adm. Brian Fort, who investigated the fatal collision, wrote in the internal report that a critical self-review after the incident could have helped prevent the fatal crash, according to the Navy Times.

“Had the [commanding officer] and [executive officer] critiqued the near-collision, they may have identified the root causes [of the fatal Fitzgerald collision] uncovered by this investigation,” Fort said in the report, according to the newspaper.

Cmdr. J. Dorsey, Navy assistant chief of information, told Stars and Stripes by email Wednesday the service has “no report or additional information to provide regarding Fitzgerald’s near-collision in Sasebo in May 2017.”

Dorsey pointed to a paragraph describing the Fitzgerald’s lack of self-review described in the combined Fitzgerald and USS John S. McCain post-collision report.

“The command leadership did not foster a culture of critical self-assessment,” the report said. “Following a near-collision in mid-May, leadership made no effort to determine the root causes and take corrective actions in order to improve the ship’s performance.”

To address the issue, the Oct. 26, 2017, post-collision report suggested the Navy “establish and utilize near-miss reporting processes to share lessons across the surface force.”

Comment from the Navy on the implementation of that suggestion was not immediately available Thursday.