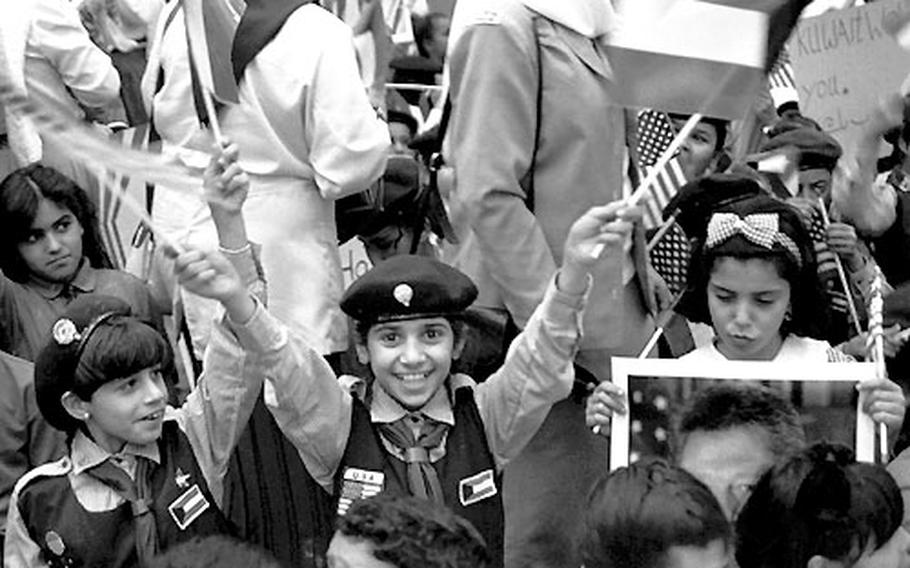 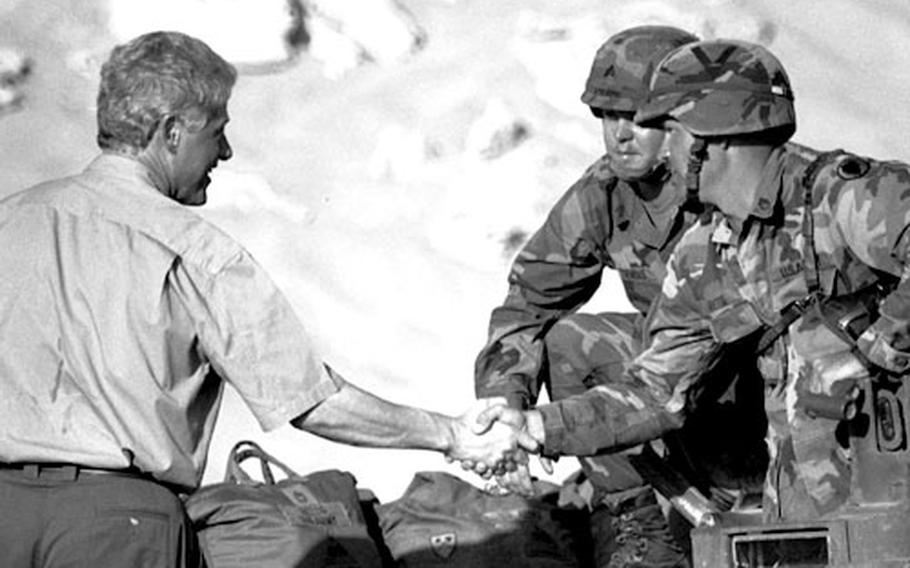 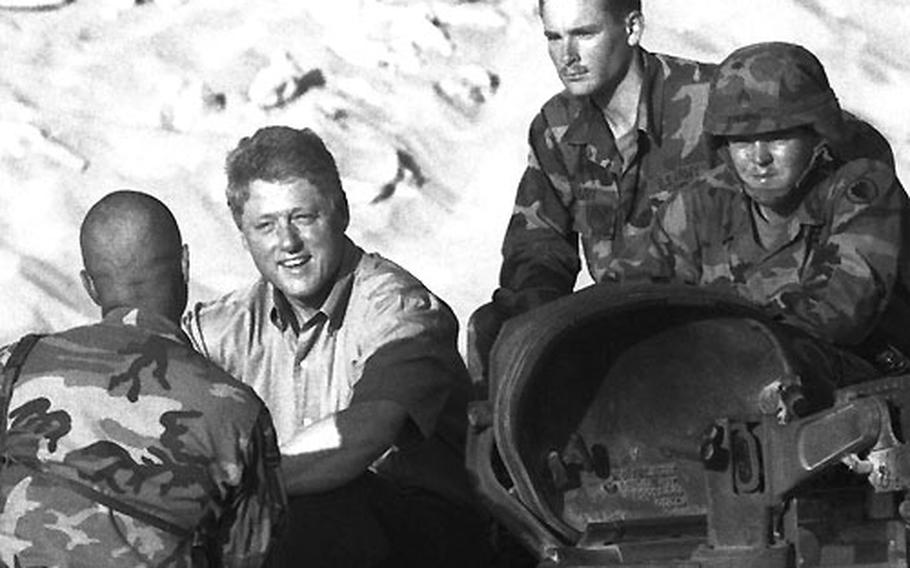 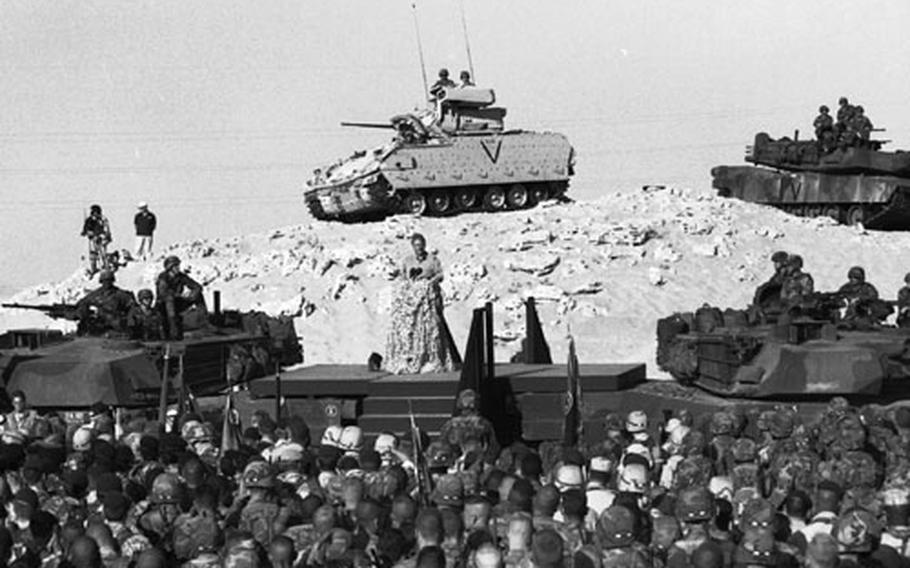 The scene in th Kuwaiti desert as President Clinton talks to the troops. (Ken George/Stars and Stripes)

TAC ASSEMBLY AREA LIBERTY, Kuwait — Meeting 1,400 U.S. troops in the Kuwaiti desert Friday, President Clinton told them what they wanted to hear when he hinted they will be home by Christmas.

Accompanied by frequent whoops and shouts of "Hooah!" from the troops, the president praised their rapid deployment to fend off this month's border crisis in Kuwait. As he finished and began stepping away from the desert-camouflaged podium, GIs in the ranks started shouting, "When are we going home?"

Clinton returned to the microphone and said, "Don't forget to go Christmas shopping." He then descended into the crowd for handshakes with applauding troops while a loudspeaker played Born in the U.S.A.

About 9,000 ground combat troops are among the 28,000 who were deployed to the Persian Gulf region for the crisis, which has evolved into a training exercise following Iraq's withdrawal from the border.

Pentagon officials, speaking to the Washington Post, confirmed that the Air Force plans to station 24 ground attack aircraft in Kuwait permanently; The proposed aircraft, A-10 Thunderbolt IIs, are noted for their tank-killing ability. The squadron of A-10s will come from Pope AFB in North Carolina.

In response to this month's crisis, Pentagon officials said they are also negotiating to add pre-positioned equipment for two more combat brigades in the region, enough combat power for 12,000 troops. In addition to the brigade's worth of equipment already in Kuwait, a brigade's equipment would be warehoused in Qatar and another in either Saudi Arabia or the United Arab Emirates.

In his 15-minute speech, the president kidded troops about sandstorms and Elvis sightings in the Kuwaiti desert. He also gave a stern message to Iraq, which massed more than 60,000 troops near Kuwait's northern border earlier this month.

"The U.S. and the international community will not allow Baghdad to threaten its neighbors now or in the future," Clinton said.

"That is not our threat. That is our promise."

He emphasized American resolve to enforce U.N. Resolution 949 that prohibits Iraq from moving its heavily armed Republican Guard units across the 32nd parallel into southern Iraq. The line is also the boundary of the U.N. "no-fly zone," and Resolution 949 was passed two weeks ago to prevent a repeat of this month's border crisis. Iraq's invasion of the tiny, oil-rich country in 1990 led to the Persian Gulf War.

"We will not permit Iraq to enhance its capability below the 32nd parallel," Clinton said. Iraq withdrew its forces from the Kuwaiti border following a swift reaction by U.S. and coalition troops.

"The history of this encounter is that you got here in a very big hurry," Clinton told the troops, who were mainly from the 24th Inf Div (Mech) out of Fort Stewart, Ga.

"And because of that, Iraq got the message in a very big hurry," Clinton said. His desert audience also included soldiers from Bahrain, Kuwait, the United Arab Emirates and the United Kingdom.

Speaking at a desert site about 60 miles from the Iraqi border, the president was flanked by M1 Abrams tanks and Bradley fighting vehicles.

"There are a few back home who question our military preparedness," Clinton said. "They ought to come over here and take a look at you."

"He said a lot of things soldiers wanted to hear," said Johnson, 22, a Bradley vehicles mechanic from Nashville, Tenn. He said he postponed his Nov. 5 wedding because of his desert deployment.

Several soldiers said they were glad to get a visit by their commander in chief, particularly when it meant television crews were putting them on the air live back home.

"That's excellent. That's what everybody wants to hear," Sgt. George Regan said of the president's Christmas shopping suggestion. Regan, 30, is from Kansas City, Mo., and is assigned. to the 24th Fwd Support Bn.

But some troops said the president's Christmas shopping announcement had been too vague. "That was a double-ended statement," said Pfc. Brian Lagesse, 19, an infantry mortarman from Stockton, Calif.

"I'd like to point out that there's a PX at Camp Doha," said Chief Warrant Officer 3 Fred Housel, referring to an austere military compound on the outskirts of Kuwait City. "We could do our Christmas shopping there."