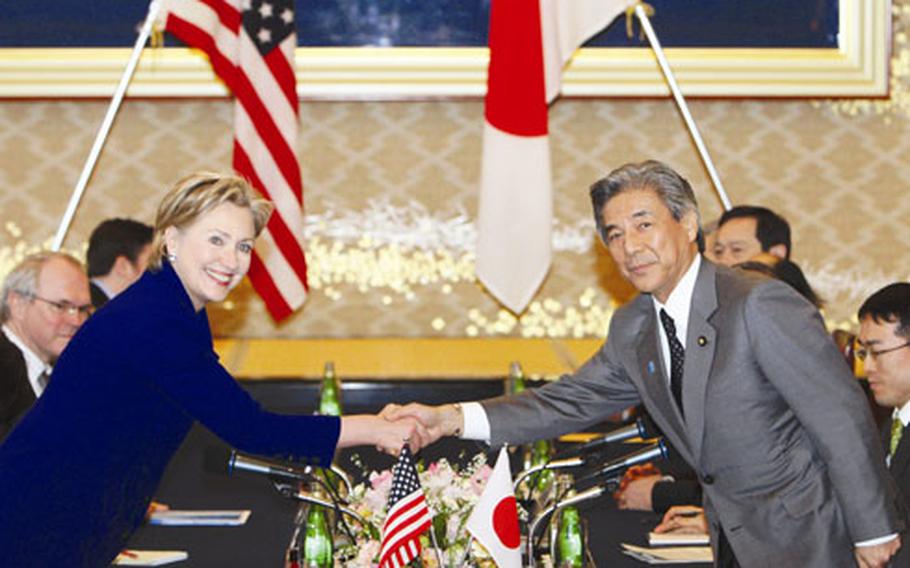 Secretary of State Hillary Rodham Clinton, left, shakes hands with Japan Foreign Minister Hirofumi Nakasone prior to their meeting at the Iikura Guest House on Tuesday in Tokyo. (Tomohiro Ohsumi/AP)

On her first trip to Asia since taking office, Secretary of State Hillary Rodham Clinton signed an agreement in Tokyo on Tuesday that puts teeth into a plan to move 8,000 Marines and their families from Okinawa to Guam.

The agreement, signed by Clinton and Japan Minister of Foreign Affairs Hirofumi Nakasone, spells out how the $6.09 billion Japan has said it will contribute to the project will be spent. Specifically, Japan agreed to spend a total of $2.8 billion for "projects to develop facilities and infrastructure on Guam."

The new agreement reinforces a bilateral agreement signed in May 2006 to realign U.S. troops in Japan. Key to the so-called "Realignment Roadmap" is the building of a new airfield on Camp Schwab to replace Marine Corps Air Station Futenma. But the plan has been stalled because of opposition by some Okinawa officials who want runways for the new facility to be built offshore.

"This agreement reflects the commitment we have to modernize our military posture in the Pacific," Clinton said at the signing. "It reinforces the core of our alliance &#8212; the mission to defend Japan against attack and to deter any attack by all necessary means."

Nakasone said the agreement "shows the strength of our alliance."

"We agreed to work toward the implementation of the 2006 pact in a manner that does not compromise readiness or capability," Nakasone said.

The cost of the realignment plan has raised some hackles in Japan, with officials eager to reassure the public that Japanese companies would profit and the money would not go to other projects.

The realignment would transfer the headquarters of the III Marine Expeditionary Force and some 8,000 Marines and their families to Guam. Japan and the U.S. have said they expect the move to be completed in 2014, although in recent weeks the commander of U.S. forces in the Pacific and a Guam senator have said it may take a decade or more.

About half of the U.S. troops in Japan are based on Okinawa, including 13,200 Marines. Once the new Marine airport is built, the U.S. has agreed to close several Marine bases in southern Okinawa.

In a statement issued Tuesday afternoon, Guam Gov. Felix Camacho said the agreement "reaffirms the commitment to relocate U.S. Marines to Guam and further expand the military into the Western Pacific."

"The finalization of this agreement confirms the need for our leaders to unite and ensure development will be sustained for years to come," Camacho said, according to a press release. "This administration will continue to work with the U.S. Department of Defense to make certain the buildup benefits all those who call Guam home."

The agreement was not as well received on Okinawa, where the prefectural assembly last year passed a resolution against the new airport.

They want the air facility to be located anywhere but Okinawa.

The six parties that make up the majority in the assembly sent a written request Monday to Nakasone urging him not to sign the agreement.

"The consensus of Okinawa is against construction of a new military facility on Okinawa," Yonekichi Shinzato, who leads the coalition, said before the signing. "The Japanese government, while fully aware of this, is about to sign the pact over the heads of Okinawan people."

Their demand was echoed by a group of 14 Okinawa scholars who issued a statement Monday that the realignment plan "would do nothing but add a further burden to Okinawa."

Seigen Miyazato, who leads the group of the scholars, said that Prime Minister Taro Aso&#8217;s administration is in a hurry to sign the bilateral pact while Liberal Democratic Party and the Komeito party still control Japan&#8217;s House of Representatives.

Okinawa Gov. Hirokazu Nakamine also had reservations and hoped the two governments would reconsider his request to move the airport offshore.

"We understand that the agreement was made to ensure the move of Marines from Okinawa to Guam, which will contribute to reduce the burden of Okinawa," he said. "From the standpoint of giving due consideration to the wish of local communities and natural environment, we continue to ask the governments to move the site farther offshore."