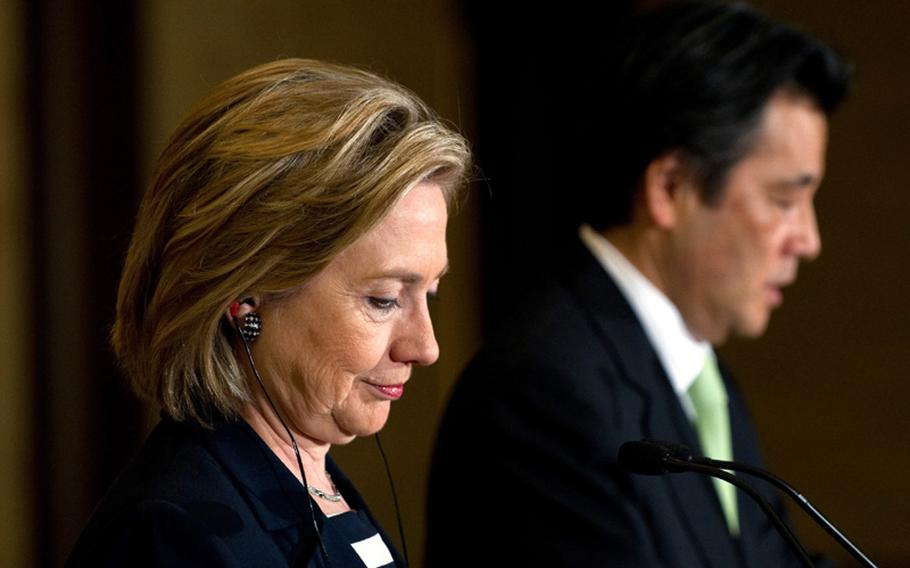 GINOWAN, Okinawa &mdash; U.S. Secretary of State Hillary Clinton and Japanese Foreign Minister Katsuya Okada agreed Friday in Tokyo to work toward settling on a plan for the Futenma relocation issue by the end of May.

The two met for an hour, during which Okada spelled out his government&rsquo;s latest position on modifying a 2006 U.S.-Japan agreement to move Marine air units from Marine Corps Air Station Futenma, in the heart of urban Ginowan, to a new facility to be built on Camp Schwab, on Okinawa&rsquo;s rural northeast coast.

Clinton said the two governments would try to minimize the impact of the move on the community that would host the new facility, according to a Japanese translation of her comments.

Neither official addressed details of the plan Prime Minister Yukio Hatoyama is expected to make public Friday. Japanese media, quoting unnamed government officials, have reported Hatoyama has abandoned the pledge he made during elections last summer to move the base functions outside Okinawa.

His plan is now reportedly a minor modification of the 2006 realignment agreement that calls for building runways and support facilities on Camp Schwab. The two runways would stretch onto reclaimed land in Oura Bay. Once the two countries agree to a general plan, negotiations on the details could take months.

The modified plan includes transferring the training of the Marine air units to other parts of Japan.

Okada acknowledged the government still has to sell the plan to Okinawa, where most local officials are opposed to any new base construction and tens of thousands have attended rallies against keeping the Marines on the island.

Prime Minister Hatoyama will meet Okinawan officials on the island on Sunday.