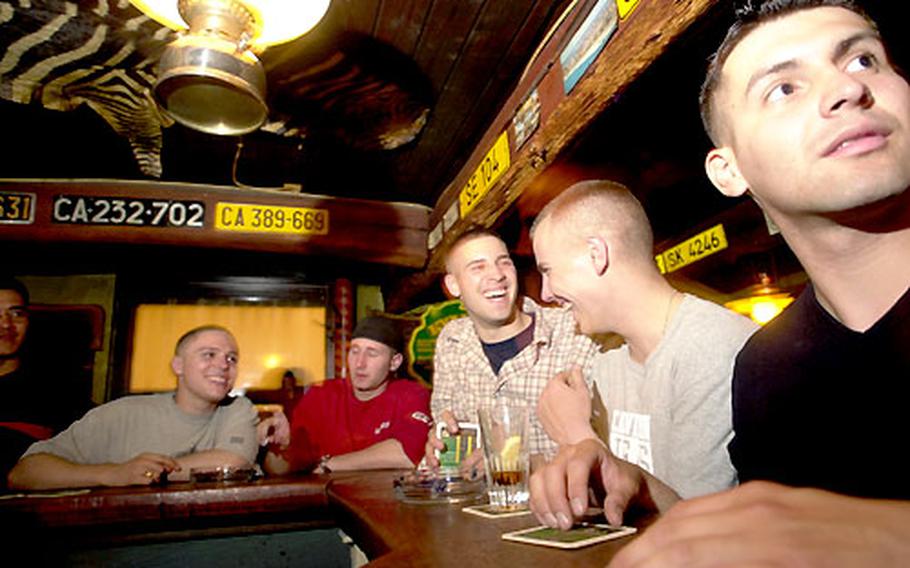 Soldiers from Schweinfurt, Germany, share laughs and a few drinks Friday night at Kyalami, a longtime popular hangout in the Sachsenhausen pub district of Frankfurt, Germany. An exhausted Spc. Clint Lamebear was falling alseep at the bar in Kyalami the night he was murdered last November. (Raymond T. Conway / S&S)

Soldiers from Schweinfurt, Germany, share laughs and a few drinks Friday night at Kyalami, a longtime popular hangout in the Sachsenhausen pub district of Frankfurt, Germany. An exhausted Spc. Clint Lamebear was falling alseep at the bar in Kyalami the night he was murdered last November. (Raymond T. Conway / S&S) 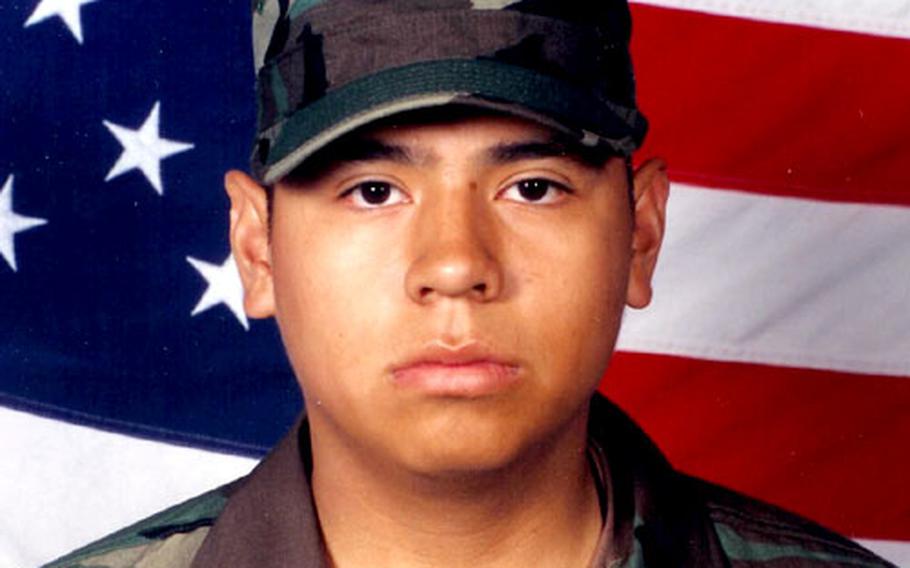 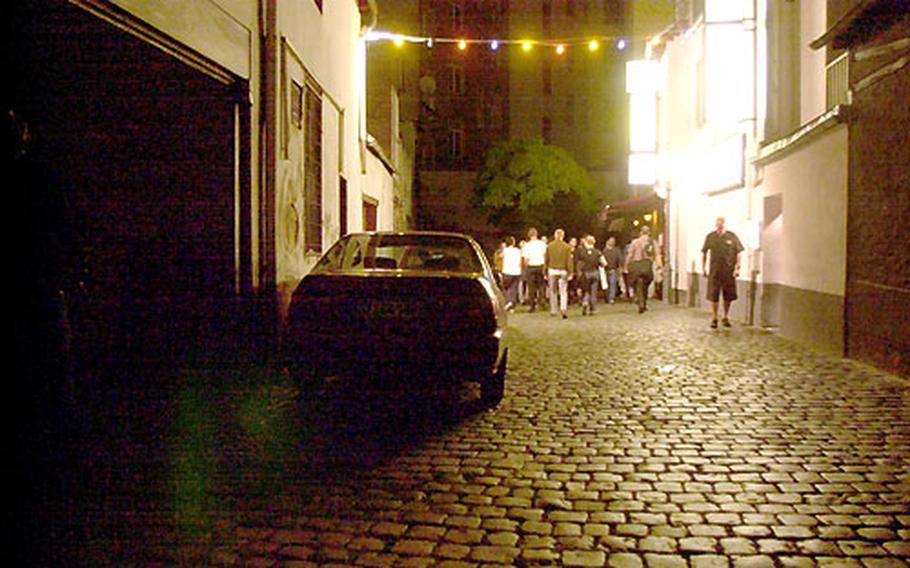 The final moments of Spc. Clint Lamebear&#39;s life were spent here — a dirty, pitch-black garage, at left, where he was brutally beaten and left to die by fellow soldiers. (Raymond T. Conway / S&S)

When Clint Lamebear&#8217;s family saw him off at the Albuquerque airport, they knew the young infantryman was headed to far-off lands where he might encounter dangers.

They had just a few minutes at a security checkpoint to say goodbye before he boarded a 9 a.m. flight. The slender, 18-year-old Navajo was heading to Germany, to serve in the U.S. infantry &#8212; a family tradition that he intended to make his career.

But with a tattered Spitfire backpack, and wearing a red Ecko T-shirt, shorts and sneakers, Lamebear looked more like a teen skateboarder than a soldier.

Just two weeks before his death, Lamebear finished nearly four months of infantryman training at Fort Benning, Ga., where he learned that a soldier&#8217;s utmost duty was to protect fellow soldiers, his mother said.

After graduation, the soldier and his family visited with his aunt Lynette Bonar, a former Army medic, and her husband, Lauren, another former soldier.

The couple met while stationed in Germany. They reminisced with him about their adventures in Europe during his visit to their home outside Fort Leonard Wood, Mo.

When they arrived home in Church Rock, N.M., a small town on the Navajo reservation outside Gallup, N.M., Lamebear stayed up late talking to his sister Erica, 21. The next day he went shopping in Gallup, where he met friends.

He had lost weight in basic training, his family said, giving him the look of a slender 12-year-old rather than an 18-year-old infantryman. Yet he stood tall and straight. He proudly showed his uniform and dog tags to his family.

He&#8217;d climb into his oversized Dodge pickup, adorned with skateboarding stickers, and take his sister&#8217;s daughter, 4-year-old Tyler Jayde, out for lunch and shopping for books. His mom still chokes up when she sees a sticker the Army recruiter gave her son that reads, &#8220;I&#8217;m the proud parent of a U.S. Army soldier.&#8221;

During his brief stay at home, Lamebear helped local Army recruiters by visiting the Navajo reservation and Gallup schools in uniform. He spent time working on his uncle&#8217;s farm, and visited with relatives that drove several hours to see him.

His last night at home, Friday, Nov. 8, the family celebrated Thanksgiving and his Nov. 25 birthday. Lamebear liked pumpkin pie instead of cake because his birthday fell near Thanksgiving, his mother said.

When the table was set and he was nowhere to be found, they were not surprised. He was known for showing up late for dinner. That day, he drove 150 miles to take a girlfriend to the movies in Albuquerque.

After dinner, they wished him a happy birthday with a camouflage-colored cake adorned with tiny plastic army men. For his gift, they gave him a wristwatch &#8212; which his murderers would remove from his arm just a week later.

That night, Lamebear attended a dance in Gallup with his brother Clifford, 18. The next morning, during the two-hour drive to Albuquerque with his parents, he slept in the back of stepfather James Benally&#8217;s king-cab pickup truck.

At the airport, June sensed something was wrong as she watched her son walk through security. Under Navajo tradition, seeing a loved one off is supposed to be a happy time where the traveler is wished a safe journey, said Benally.

Despite the ominous feeling, the family expected him to be relatively safe on an Army base in Germany.

On Veterans Day, Lamebear arrived at Frankfurt airport. He was assigned to the 1st Battalion, 36th Infantry Regiment at Ray Barracks in Friedberg, a small town about 15 miles north of Frankfurt. But his first few days were spent filling out military paperwork in Giessen.

That Friday afternoon, he called the Navajo Nation Inn, a motel and restaurant where his mom works as general manager. It was about 9 a.m. in New Mexico. They spoke of the impending war in Iraq, and he said he would be getting ready to deploy there.

Before they hung up, she told her son she loved him.

Lamebear no doubt had little time to overcome the fatigue from travel and countless hours of processing into his unit. Yet that Friday he threw his ever-present skater backpack over his shoulder and boarded a train to Frankfurt with fellow soldiers for his first night out on the town.

When the train stopped after an apparent suicide, according to Lamebear&#8217;s friend Pfc. Jonathan Land, the group of soldiers hailed a taxi to get to Sachsenhausen. In the neighborhood of taverns along cobblestone streets in Frankfurt&#8217;s South End, Lamebear was drinking with friends and meeting girls, Land said.

Meanwhile, Humiston and Schroeder arrived by taxi to celebrate a friend&#8217;s birthday. By his own account, Schroeder drank a half-liter of rum, several vodkas and Red Bull, and six beers while still in Friedberg. In Frankfurt, he drank several more beers and a half-dozen shots of vodka, he said.

It&#8217;s unclear how much Lamebear had to drink that night.

By 3 a.m., at least two hours after the last train to Friedberg left, Schroeder and Humiston found Lamebear slumped over a bar. The bartender asked them to take Lamebear with them. They learned that he was a soldier assigned to Friedberg, but did not know that Lamebear was from their unit, they said.

As they headed out to a nearby taxi stand, Schroeder joked that they should teach Lamebear a lesson by beating and robbing him.

Lamebear, by then leaning on Humiston&#8217;s shoulder, was talking as they drifted down a cobblestone alley. They entered a small, dark garage where a minivan was parked. As Humiston stepped out to light a cigarette, Schroeder punched Lamebear and brought him to the ground in a headlock. When Lamebear tried to run away, Humiston blocked his escape. As Schroeder held Lamebear, Humiston kicked him and went through his pockets.

They grabbed his wallet and stepped out into the light to see how much money he had. Humiston admitted to taking 5 euros, slightly more than $5.

In all, they took about 40 euros, his wallet and military identification, and the watch Lamebear&#8217;s family had given him a week earlier.

Like a wounded animal, Lamebear, then on his knees, cried out. Several nightclubs, often with customers mingling outside, were just a block away.

Schroeder picked up a piece of wood lying in a pile of debris nearby and struck Lamebear&#8217;s head at least three times as Humiston watched.

Both Schroeder and Humiston said they thought his injuries appeared not to be so severe. Neither thought to call an ambulance and, instead, hid the murder weapon and left.

A gruesome autopsy photograph shown during court proceedings would show the soldier&#8217;s swollen head with a gaping gash extending diagonally from his forehead to jaw line. Morticians applied a fake nose to reconstruct his face, family said.

Lamebear, the nephew of two Marine Navajo code talkers from World War II, the skater who longed for a military career, the cheerful son, brother and uncle with an infectious smile, suffered long after his attackers left him alone in the dark and dirty garage. He eventually drowned in his own blood.

The next day, German police identified Lamebear from a photograph of him in a Junior Reserve Officer Training Corps program uniform beside a high school sweetheart. They found his shoes and the murder weapon atop a roof across from the murder scene, where Humiston and Schroeder had thrown them hours earlier.

Back at Ray Barracks, Schroeder tried to burn Lamebear&#8217;s identification, but that did not work. Later, he and Humiston were cutting up the ID when Staff Sgt. Rodney Hulsey knocked at the door. Army investigators wanted a word with Schroeder. Humiston was left to finish cutting the card and flush it down the toilet.

Back in New Mexico, June was worried when her son didn&#8217;t call Saturday. On Sunday afternoon, she went shopping for groceries and Christmas presents to send her son. When she arrived home, an Army officer was waiting in the driveway.

After her son&#8217;s death, she would wait at her house, in case he called or came home, she said.

On Memorial Day, when his niece Tyler visited his grave in Gallup&#8217;s Sunset Memorial Cemetery, she asked when her uncle was coming out from under the flat headstone. Then she asked if she could go with him.