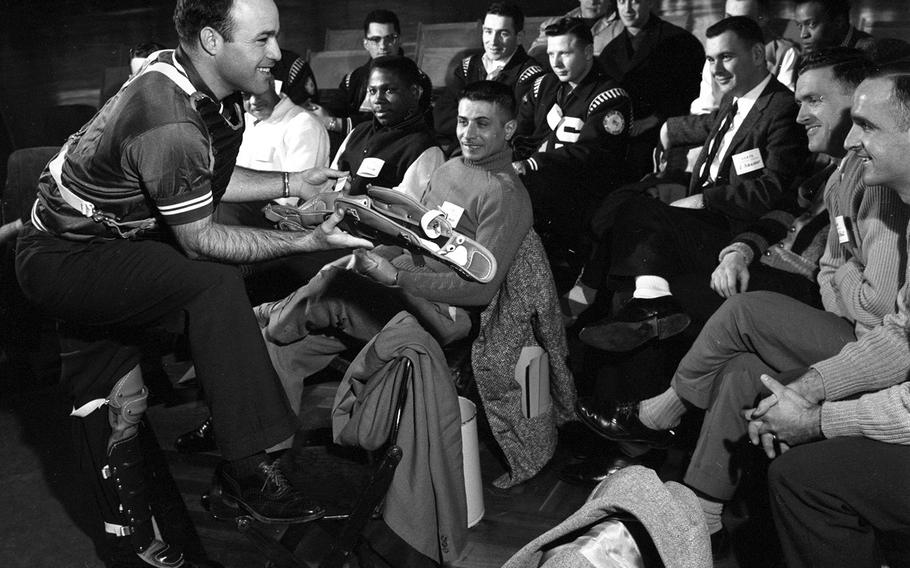 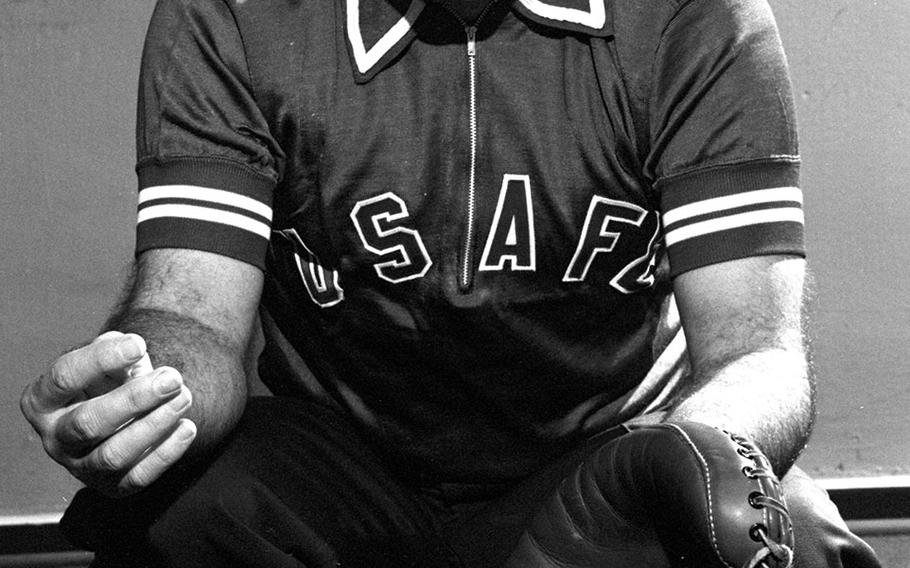 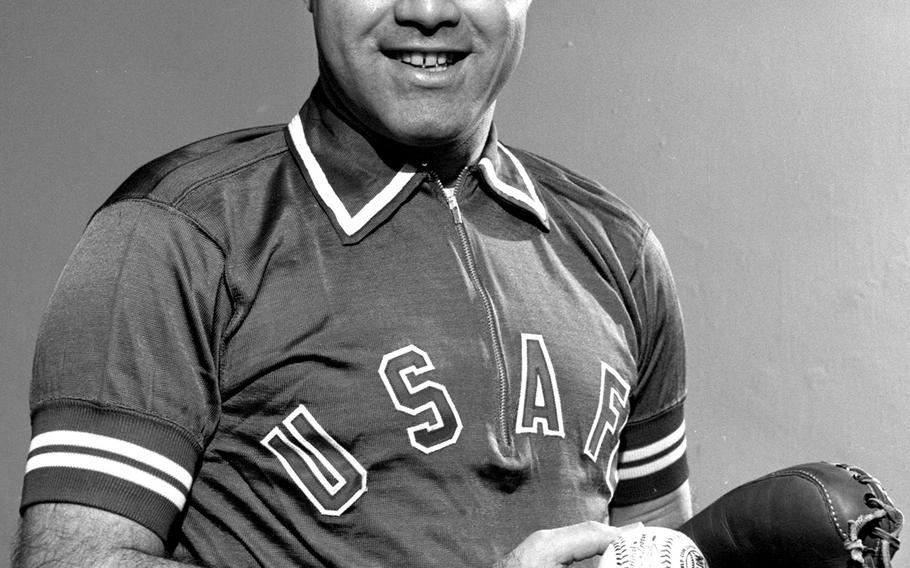 Students at the USAFE baseball clinic in Garmisch are certain to reap sage advice and wisdom, a thorough insight to major league baseball and an endless number of prized anecdotes dealing with the American pastime from Joe Garagiola during the week-long course.

But Garagiola, who gives of himself, his knowledge and his wit unselfishly, figures he is getting at least an even trade out of the deal.

For the ex-major league catcher-turned-broadcaster believes his venture into the new field of clinic instruction will only serve to benefit his still blossoming career.

In fact, Joe thinks he may be getting the better of the deal. For he points out that the failure of Billy Werber to make the trip has forced the other four instructors (the two umpires have a separate school) to double up.

This, Joe points out, means he'll be instructing on the finer points of base running and bunting.

And he chuckles when he visualized himself handling the base running classes. "I've got larceny in my heart but lead in my pants," Joe stated. "Getting a catcher to teach base running is like eating kosher pizzas."

Joe, who will be 33 Feb. 12 and has a forehead rapidly forcing his hairline into retreat, has been handling the play-by-play for the Cardinals on station KMOX in his native St. Louis since retiring at the end of the '54 campaign.

But in addition to delighting fans with his unique method of describing the diamond sport, Garagiola also is carving quite a niche on the knife-and-fork circuit as a speaker and humorist.

Garagiola and another Italian-American of note who was his across-the-street neighbor, Yogi Berra, entered organized baseball at about the same time.

Both donned the "tools of ignorance" and there was some question as to who would become the greater catcher. Yogi joined the New York Yankee chain and his success is legendary.

He joined the parent Cards in '46 and helped them to the National League pennant and a World Series victory over Boston.

He stayed in Cardinal flannels until June, 1951, when he was traded to Pittsburgh. He moved to the Chicago Cubs in 1953 and then to the New York Giants in late '54.

The rapid shift from one club to another jolted Joe into the realization that he was being tagged as an "interim" catcher.

And at the end of the 1954 season he abandoned the "bullpen for the radio booth."

But he had prepared for this day long before. On June 1, 1950, Brooklyn Dodger Jackie Robinson collided with Garagiola at home plate, causing Joe to suffer a shoulder separation.

During his long convalescence, he suddenly awakened to the fact that there'd "come a day when I couldn't go out to the park anymore ns n player."

"So," the cigar-smoking Joe recalled, "I began investigating the possibility of entering the broadcasting business. I sought the advice of Gabby Street (famed old time Cardinal catcher who also switched to the microphone) and he encouraged me.

"In anticipation of that day when I might enter the business," Joe \continued, "I began compiling baseball anecdotes and stories."

And in 1954 he made the gamble while "I was still young and desirous and acquainted with all the current players."

And that gamble has paid off richly for himself, his wife, Audrie Dianne, and sons Joey, 8, and Steve, 4.

Not only has he climbed rapidly in his still infant career but he has found that his stature as a ballplayer has somehow increased correspondingly.

Joe admits he wasn't a "really good player." In fact, he has inscribed on the inside cover of his scorebook as a daily reminder: "You played nine years and you ain't in the Hall of Fame."

Garagiola's lifetime batting average was .257 with a home run high of 11 in 1951. But with each passing year, Joe's fame grows, as he musingly points out.

There's no telling where the superlatives will stop, for the demand for Garagiola as a banquet speaker continues. He's traveled the width and breadth of the U.S. talking for his supper — and other remunerations

He draws from his vast of anecdotes and stories, covering umpires, managers, fans and the players, His pet subject is the zany Berra, his longtime friend.

His tales on Yogi are limitless. He digs back to their youth to recall many incidents, how a cold-ridden Berra braved snow and sleet to turn out and play in a soccer game and when told to go home because he was sick answered: "You aren't healthy if you can't get sick on a day like this."

Joe recalls a humid day in New York when driving in Yogi's luxurious automobile he asked if the car had air conditioning, and Berra retorted: "Yea, but I'm not rolling up my windows on a hot day like this."

These same personal associations are applied to his game broadcasts, for Garagiola keeps a book on all National League players as to their weaknesses and strengths.

"I'm not a top radio man," Joe insists, "I'm a ballplayer gone to radio. I don't believe in criticizing the players nor do I alibi them. But I remember I was a player and I know they are just human.

"I just talk baseball to the listeners and they seem to like it."