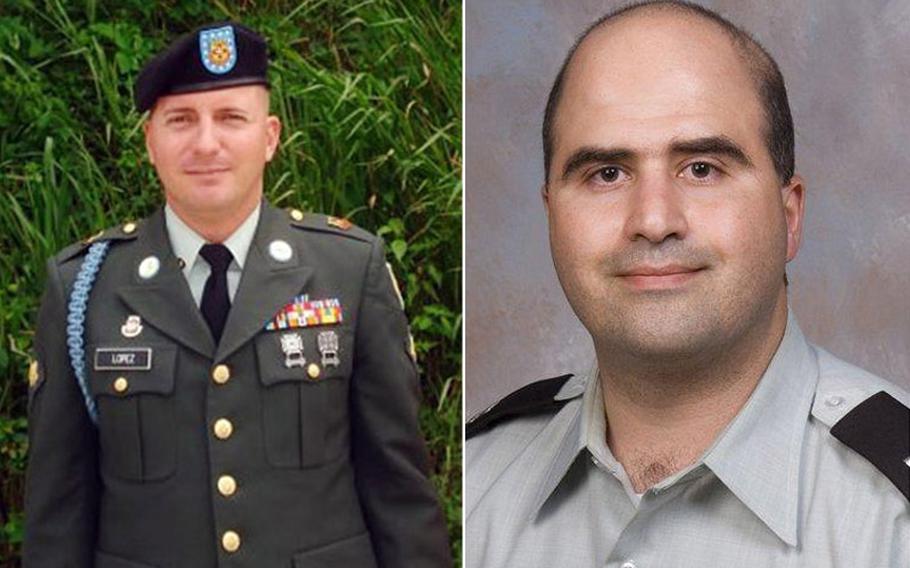 Spc. Ivan Lopez (left) and Maj. Nidal Hasan. Lopez killed three and injured more than 16 people at a mass shooting at Fort Hood on April 2, 2014. Hasan killed 13 and injure more than 30 others at the same base on Nov. 5, 2009. Both purchased their weapons at Guns Galore, a shop near the base popular with soldiers. (Photos Courtsey of Glidden Lopez, Uniformed Services University of the Health Sciences)

KILLEEN, Texas — Guns Galore, a small brick building on South Fort Hood Street, has a red-and-white awning under a sign with a rifle sight as the “O” in the store’s name. The sides of the building are painted white, with signs promising 3,000 guns in stock and “1,700 plus on display.”

Inside, rows of display cases are packed with carefully arranged handguns and handwritten prices, and rifles spaced inches apart reach up to the ceiling. Posters remind customers that it is illegal to buy a firearm for someone else, and remind parents that a gun store is no place for children to play.

Comic strips and memes are taped to the top of the counter. Behind it, a neon yellow sign warns “No idiots allowed.”

This is where Spc. Ivan Lopez bought the .45-caliber Smith & Wesson he used in the April 2 mass shooting at Fort Hood. Maj. Nidal Hasan shopped at the same store in 2009, buying the FN-57 and two laser sights he used to kill 13 and injure more than 30 others at the same military base.

Lopez filled out the required paperwork, passed the background check and was not acting suspiciously, according to Greg Ebert, a retired police officer who works at the store and sold Lopez the semi-automatic weapon March 1. The entire transaction took about 20 minutes, he said.

Guns Galore, which opened in 1999, is not the only place in town to buy a gun. It is popular with soldiers, and the extensive stock means customers are likely to find what they want.

After the second rampage on the post, Ebert is wary of the media and quick to point out that the store is “not the story.”

“We are a legitimate business,” he said. “We follow the rules.”

Buying a firearm On Monday morning, soldiers in camouflage and older civilian men stood in the aisle nearest the counter, browsing the weapons and talking to the staff. A young soldier asked for help finding a new deer rifle, in anticipation of hunting season. A man in civilian clothes pored over the pistols.

The men working the counter greeted everyone who walked in the door, offering help and answering questions. Two soldiers in digital camouflage filled out the paperwork required by federal law to buy a gun.

The Firearms Transaction Record, a U.S. Department of Justice form, is required for all buyers. Questions include whether the buyer has been found mentally defective or been committed to a mental institution, whether he or she uses or is addicted to drugs, has been discharged from the military under dishonorable conditions or has been convicted of domestic violence. Answering yes disqualifies a potential buyer.

One of the soldiers had a concealed handgun license, which means that he has completed a background check and provided information about his psychiatric, drug, alcohol and criminal history. For customers who do not hold that license — including Lopez and Hasan — the salesman calls the FBI for a background check.

Texans can carry rifles or shotguns in plain view with no permit, but must have a permit to carry concealed handguns. Texans are not allowed to openly carry handguns.

Gun stores rely on the process to weed out those attempting to buy a weapon illegally. But they have no way of knowing if someone is being treated for mental health issues.

Ebert said he believes soldiers with mental health issues or under psychological evaluation should be flagged so that gun stores will know — after a background check — not to sell weapons to them. He said he knows there are concerns about attempts to restrict individual rights, but he balanced that with a question:

Do you really want someone who is mentally unstable to have a gun?

Plot thwarted in 2011 Ebert has reported suspicious behavior in the past. In July 2011, he called authorities about Pfc. Naser Jason Abdo, who, Ebert said then, wore sunglasses inside, acted aloof and didn’t wait for his change or receipt.

Ebert told media at the time that Abdo bought an unusually large amount of smokeless gunpowder, three boxes of shotgun ammunition, and a magazine for a pistol. He notified the Killeen police department, which tracked him to a local hotel. Abdo was later sentenced to life in prison for a plot to set off bombs and shoot soldiers at Fort Hood.

During Hasan’s trial in August, Guns Galore owner Chad Cheadle said Hasan’s demeanor did not seem strange. He did make one unusual request, Cheadle said: He asked the salesman to demonstrate assembling and disassembling the weapon so he could record it on his cellphone. Hasan was found guilty and sentenced to death.

On Wednesday, President Barack Obama said Americans must honor the memory of the three soldiers killed April 2 by renewing their commitment to keep troops safe, “not just in battle but on the home front, as well.” That includes doing more for anyone suffering from mental illness, he said, and making sure “we never stigmatize those who have the courage to seek help.”