Clearing the air around Atsugi incinerator 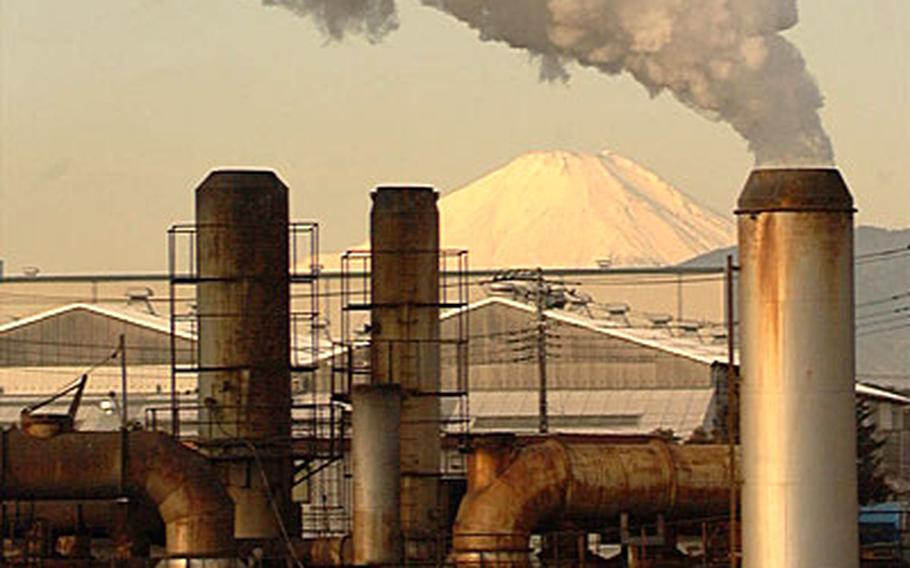 Smoke from the Enviro-tech incinerator blows toward Atsui Naval Air Facility&#39;s housing areas Saturday, with a snow-covered Mount Fuji in the background. (S&S)

To call Shelly Parulis dogged would be an understatement.

She has good reason to be persistent.

At stake, she believes, is the health of her family and hundreds of others sickened with unexplained illnesses since being stationed at Naval Air Facility Atsugi in mainland Japan.

The wife of a retired U.S. Marine Corps master sergeant, Parulis, 40, has gathered reams of documents about the now-shuttered Enviro-Tech (formerly Shinkampo) commercial waste incinerator, which pumped toxic smoke over the U.S. Navy base from 1985 to 2001.

Parulis has devoted more than a year to the effort, all the while imploring the Navy to take care of personnel and their families who are now sick, some without medical insurance.

Her attempts have been met with resistance.

&#8220;It takes three, four and five months for them to write back,&#8221; she said in a recent telephone interview from her home in Jacksonville, N.C.

In the meantime, Parulis this fall launched a Web site (www.atsugi-incinerator- group.com) posting all the information she fought to get, including incinerator emissions reports, health risk studies, internal memos and &#8220;even hand written notes regarding the contaminated air, soil and dust that we and our children were exposed to while we faithfully served our country,&#8221; Parulis says on the site.

When Stars and Stripes asked Commander, Naval Forces Japan, headquartered at Yokosuka Naval Base, for a comment about the Web site, CNFJ spokesman Jon Nylander said in an e-mail that &#8220;the U.S. Navy supports and defends to the fullest extent possible&#8221; the right of free expression.

The site isn&#8217;t going unnoticed: In one recent two-week period, the site had more than 4,000 hits, Parulis said.

When she began her research, Parulis had no idea others were sick.

But then she came across Marlyn Miller, a retired chief petty officer who lived at Atsugi from 1990 to 1995. He was e-mailing others who had been at Atsugi, inquiring about their health.

The Web site prompted a flood of e-mails from active-duty, retired, and former sailors and Marines, and their families with ailments ranging from chronic coughing and skin rashes to neurological disorders, cancer and liver failure.

Another former sailor stationed at Atsugi, who&#8217;s had a liver transplant, wrote to Parulis: &#8220;While I was there I was an avid golfer. And at times the smoke from the incinerator would hang across the course like a thick fog. It killed the grass in many places, and they were always working on it.&#8221;

Parulis and her family lived at Atsugi from 1995 to 1998. The incinerator was a couple hundred meters from the family&#8217;s military housing unit, the child care center her son attended, and Shirley Lanham Elementary School, where she worked and her children went to school.

About six months after her family left Atsugi, most of her daughter&#8217;s hair fell out. There were other unexplained health problems, some of which diminished over time. But the biggest scare was yet to come. In January 2006, Parulis&#8217; husband, David Parulis, was found to have renal cell carcinoma, a common form of kidney cancer in adults over 50 that&#8217;s been linked to environmental toxin exposure, among other risk factors.

Miller, who will be 42 this month, said he and his wife and daughter are struggling with health problems that seem to be getting worse, including kidney damage, liver problems, tremors and coughing spells.

Doctors have yet to unequivocally link Miller&#8217;s declining health to toxic exposure, but they tell him it&#8217;s likely and more testing is needed, he said.

The Navy contends that establishing that direct connection may be difficult.

In a letter this spring to Parulis, Rear Adm. D.J. Smith, the former deputy chief of staff for operations for the Navy&#8217;s Bureau of Medicine and Surgery (BUMED), said &#8220;the exposures at Naval Air Facility, Atsugi are very complex and understanding the effects on any one individual is not easily answered. &#8230;

Given the number of exposures over a lifetime to different agents that are suspected of causing cancer in humans, medically we are rarely able to attribute an individual&#8217;s cancer to any one known exposure.&#8221;

In answering a series of questions from Parulis, Smith also said, &#8220;we don&#8217;t know of any specific cases where a chronic disease was directly attributable to exposure to the incinerator adjacent to NAF Atsugi.&#8221;

In a follow-up letter to Parulis from BUMED in September, Rear Adm. Karen Flaherty said Navy Medicine has tasked the Navy Environmental Health Center to conduct a health study of former Atsugi residents &#8220;in an effort to determine whether there are more cases of disease than normally expected in such a large population.&#8221;

A draft proposal of the &#8220;Atsugi Health Study,&#8221; obtained by Parulis, says the $125,000 effort would be limited to members still entitled to health care through the military.

Parulis thinks the study should be expanded to include all former personnel stationed at Atsugi while the incinerator was active.

She and Miller have contacted members of Congress, asking them to &#8220;work with the military and get the appropriate responses that so many families are demanding.&#8221;

They would like the Navy to notify all exposed personnel of the health risks associated with an assignment at NAF Atsugi; educate all Navy hospitals, clinics, physicians in the Tricare network and veterans health facilities about the risks related to the exposure; and fund preventive health care and screenings.

The Navy appears to have known as early as 1990 that the incinerator posed a potential health risk to Atsugi base residents.

In a 1990 report prepared by the Naval Energy and Environmental Support Activity after an &#8220;on-site investigation of incinerator emissions,&#8221; a team of engineers wrote: &#8220;We were mentally unprepared for anything this bad &#8230; Industrial wastes and plastics contained in municipal solid and commercial waste create a &#8216;witches brew&#8217; of toxic emission.&#8221;

The Navy after that began monitoring air and soil quality and conducted several extensive health-risk assessments. But the plant wasn&#8217;t shut down until 2001, when the U.S. Department of Justice brought a lawsuit against the owner.

&#8220;It has always been the Navy&#8217;s Policy to take care of our people and their families,&#8221; Nylander said in a prepared statement last week. &#8220;Their well-being is of primary concern to all echelons throughout the Navy in the U.S. and around the world. Commander, U.S. Naval Forces, Japan in conjunction with other appropriate agencies addressed possible health dangers of the Shinkanpo Incinerator leading to its closure.&#8221;

Parulis said the incinerator&#8217;s closure came too late for her family.

It began operating in 1985 and was shut down in 2001 after much political wrangling between the U.S. and Japanese governments over incinerator emissions.

That was after a team of engineers conducted an investigation at the request of the Navy in 1990. They described the incinerator as four smokestacks that burned municipal solid waste, liquid and solid industrial waste, solid commercial waste, and construction debris. It also was alleged that medical waste was burned in one of the units.

Some products &#8212; such as cardboard, paper and wood don&#8217;t pose a threat when properly burned, the engineers noted. But the units were not properly operated or regulated, at times burning twice their permitted daily capacity and at too-low temperatures, according to various reports.

The engineers described the smell, sight, taste, reach and effect of the toxic fumes in their report:

&#8220;A foul taste is noticed in the mouth.&#8221;&#8220;The area appears to be in a gray fog.&#8221;&#8220;There is a noxious odor other than the normal odor of (municipal solid waste) incineration.&#8221;&#8220;After a few minutes exposure, individuals complain of nausea, upper respiratory tract discomfort, and chest tightness.&#8221;&#8220;We frequently observed the plume fumigating as far as the Bachelor Officers Quarters, the Navy Exchange, and the area of the control tower. It is probable that over time, all parts of the base are exposed to the effects of these incinerators.&#8221;The fumes generally blew over the base six months a year, with winds shifting and blowing the plume the rest of the year into a Japanese industrial park and residential neighborhood, according to a Navy report.

The Navy&#8217;s final health risk assessment, conducted by the Navy Environmental Health Center and published in 2002, found that cancer and non-cancer risks were elevated for both adults and children &#8212; but higher for children, from birth to age 6. That&#8217;s due to children&#8217;s typical hand-to-mouth behavior, and their play activities closer to the ground, which increases the amount of soil and dust that they are likely to ingest, the report said.

Such calculated health risks in the United States would rise to the level of concern &#8220;that either would shut down an incinerator&#8221; or &#8220;cause action to be taken to reduce emissions,&#8221; the report stated.

In 2000, according to a Navy report, the incinerator emissions posed a health risk to 6,000 servicemembers and U.S. and Japanese civilian employees. About 3,000 families lived on base &#8220;directly in the path of the smoke.&#8221;

The site tells how people can contact U.S. Navy officials and their congressional representatives and provides addresses for key agencies.

The Web site also notes that an estimated 370 former NAF Atsugi residents have provided information about their health problems.

The Web site is found at: www.atsugi-incinerator-group.com/.