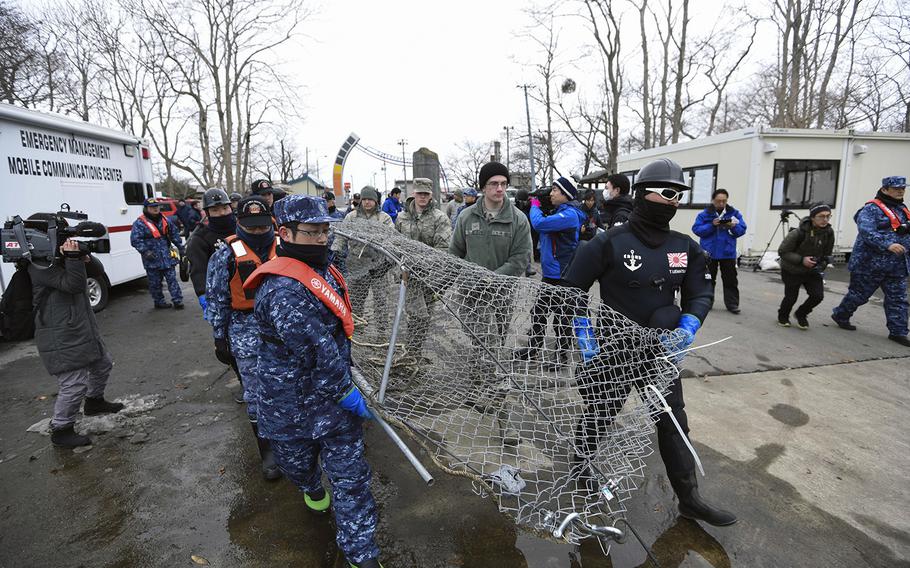 U.S. and Japanese servicemembers work together to clean up Lake Ogawara near Misawa Air Base, Japan, earlier this month after an F-16 jettisoned its fuel tanks because of an emergency. (Jarrod Vickers/U.S. Air Force)

Navy divers have recovered all salvageable debris after an emergency forced a fighter jet to drop its fuel tanks into a Japanese lake last month.

The F-16 from Misawa Air Base 35th Fighter Wing jettisoned the tanks into Lake Ogawara Feb. 20 after its engine caught fire shortly after takeoff. The aircraft landed safely and there were no injuries.

Japanese sailors initiated the cleanup but turned things over to the Air Force, which is in the final phase of the operation.

Testing conducted March 8-13 showed no fuel from the tanks in the lake, although detection efforts continue, an Air Force statement said.

“We are committed to performing our mission in an environmentally responsible manner, and we will continue to work with the local community to ensure Lake Ogawara remains safe for fishing and other endeavors,” 35th Fighter Wing commander Col. Scott Jobe said in the statement.

U.S. forces had recovered about 94 percent of the tank parts as of March 2, a Tohoku Defense Bureau spokesman said Thursday. Surveys conducted on water, dirt and fish from the lake showed no contamination.

Parts of the lake are frozen and can’t be tested; however, U.S. personnel and local fishermen are breaking ice to encourage faster melting and allow testing, the defense bureau spokesman said.

Fishing in the lake has been banned since the incident and local fishermen, who say they’re losing $37,000 a day because it’s the height of freshwater shellfish season, are seeking compensation that would likely be paid by both the U.S. and Japanese governments, the defense bureau spokesman said.

The cause of the incident is under investigation the Air Force said.

“The safety of our Airmen and our Japanese neighbors is our number one priority during flying operations,” Jobe said. “We will conduct a thorough investigation to determine the root cause of this incident.”