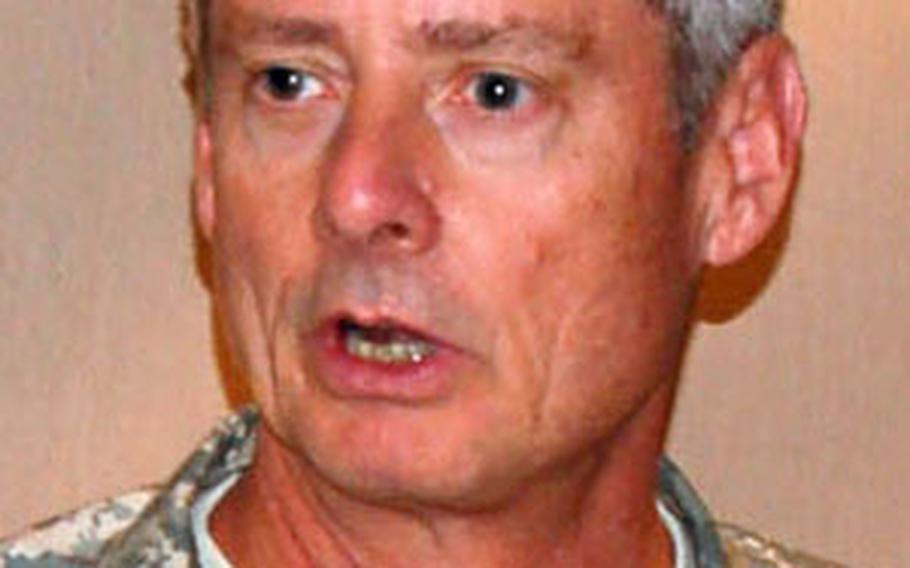 Instead, he heard about overcrowded classrooms, a lack of shuttle buses and the desire for more command sponsorship.

Sharp opened his visit with about 60 members of the Yongsan community, representing all of the services and local housing areas, by talking about his priorities: maintaining combat readiness, the transition of wartime operational control to the South Koreans and maintaining and improving quality of life.

"I can only do that, not only with your support but, more importantly, with your ideas," Sharp told the audience.

When Sharp opened the floor for questions, it was U.S. Army Garrison-Yongsan commander Col. Dave Hall who answered most of them.

One of the first topics was transportation, with one military spouse asking the command to either start allowing families to own more than one car or increase the number of buses from Hannam Village to Yongsan Garrison, which run once every 75 minutes.

Hall said bus schedules are changed frequently based on user feedback, and that the garrison would be seeking input soon. He added that there are exceptions to the policy for families wishing to own second cars "but they are few and far between" and are reserved for families with exceptional needs.

A few family members living at K-16, on the outskirts of Seoul, complained about school buses, which leave for Yongsan Garrison at 6:50 a.m. They said some young children are forced to wake as early as 5 a.m. to catch the bus. They asked for an additional bus &#8212; or more stops &#8212; to alleviate the problem.

Another parent said her child&#8217;s kindergarten class at Seoul American Elementary School is overcrowded, with 28 children.

Hall said the school&#8217;s acceptable ratio is 1 teacher to 18 kindergartners and he would look into the matter.

Command sponsorship was another hot topic at the meeting, with several people saying it took too long for them to get their families into the system and others claiming they still can&#8217;t do it.

Sharp fielded most of the command sponsorship questions, taking many names and promising one-on-one responses at a later date. He also told the audience he plans to expand the number of places command sponsorships would be available.

Sharp declined to say which places he was considering, though camps Casey and Hovey were among them.

He said if command sponsorships became available at those bases, he would make troops sign something saying "they understand what they&#8217;re getting into."

He said that at many installations slated to be closed in the transformation, there are no facilities such as hospitals and schools to support families and no plans to build any.

Sharp said he would decide within the next week which areas would become eligible for command sponsorship after discussing the issue with local commanders and David Chu, undersecretary of defense for personnel and readiness.