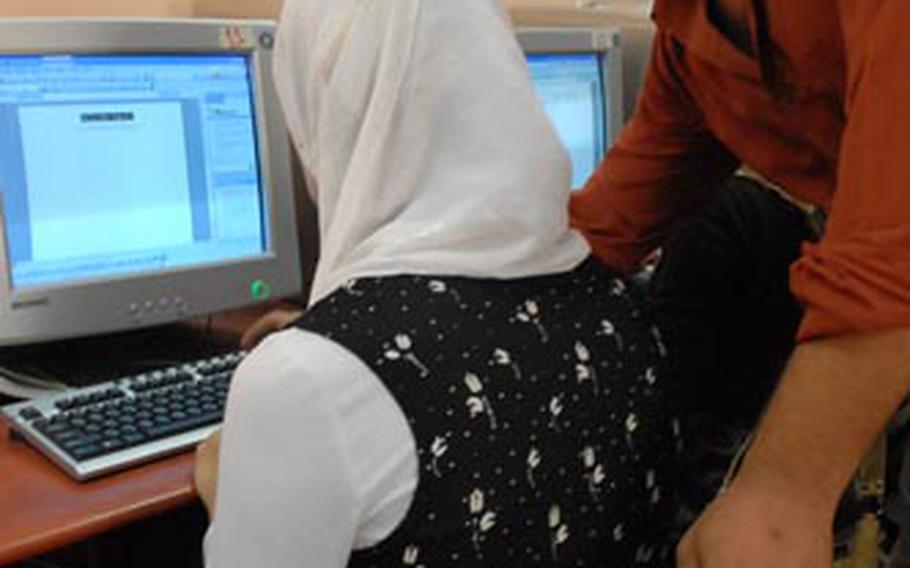 Yasser Kadim, a journeyman instructor, helps one of the school’s 13 female student’s during a computer class in Baghdad. The 400-student school has a single teacher for each of its eleven courses but has one journeyman instructor for every 10 students to help with the practical instruction. (James Warden / S&S)

Yasser Kadim, a journeyman instructor, helps one of the school’s 13 female student’s during a computer class in Baghdad. The 400-student school has a single teacher for each of its eleven courses but has one journeyman instructor for every 10 students to help with the practical instruction. (James Warden / S&S) 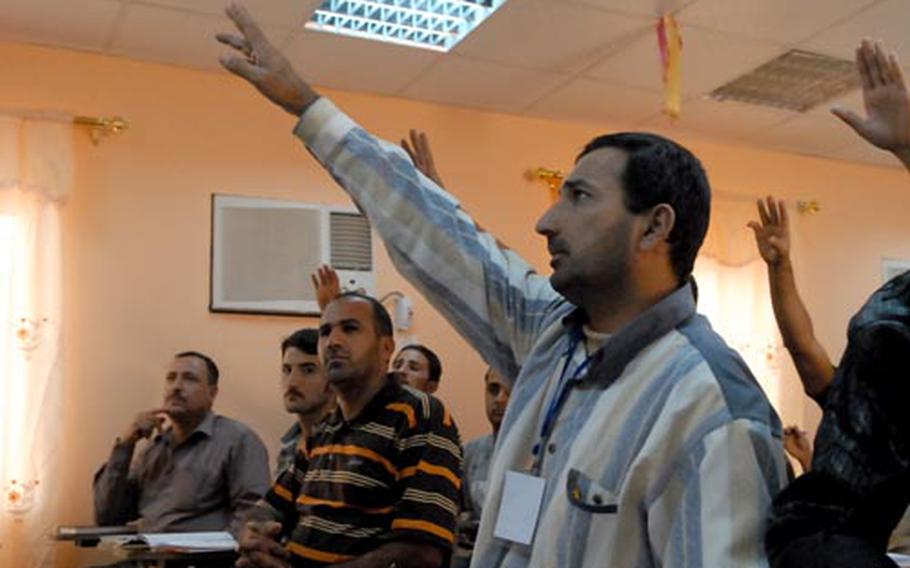 Students raise their hands Thursday in Baghdad while attending an electricians course at Civil Service Department –Jihad. American officers started the program to help “Sons of Iraq” find new jobs, but the six-month program is open to all Iraqis who want to learn new skills. (James Warden / S&S)

BAGHDAD&#8211;&#8212; It was a sunny Thursday morning, but Mazin Ismael Ibrahim was staring at a whiteboard in a closet-sized classroom.

That was fine with Ibrahim, though. He was happy to be soaking up all the first aid information the teacher was offering. The middle-aged man once owned a spare parts store and hoped the class would lead to a better job in a clinic. Just under three weeks into the six-month course, Ibrahim could already feel the knowledge sinking in.

Ibrahim was one of 400 students enrolled in an American-run program that kicked off Oct. 10 as a way to boost employment by providing Iraqis the technical skills they need to get a good job. Civil Service Department &#8212; Jihad, as the school is called, is one of several projects popping up across Iraq that aim to provide military-aged males with jobs that will help them resist insurgent money.

This particular school originated as a project to absorb "Sons of Iraq" members after the groups disbanded, said Maj. Timothy "T.J." Reed, the civil affairs officer for 1st Brigade Combat Team, 4th Infantry Division. Many American leaders fear that the military-aged men who make up most of the groups would return to the insurgency if they could not find jobs that would support them.

The Iraqi government eventually decided to take control of the groups instead of disbanding them. That postponed the time when the groups will be dissolved and reduced the demand for enrollment at the school. At one point, the American organizers doubted they would fill all the available spots.

Other Iraqis quickly stepped into the open slots when they learned it was open to all comers. Former "Sons of Iraq" now make up just 176 of the school&#8217;s 400 students, who bring a wide range of abilities from an equally wide variety of backgrounds.

Fadah Salah is one of 13 women in the program. She enrolled in the medical program with her husband,"to have a chance at a job with the government."She didn&#8217;t have a job before she enrolled, and she doesn&#8217;t know how she&#8217;d get by without valuable skills like she&#8217;s learning now.

"Sons of Iraq""or not, all students earn $300 a month during the program. That&#8217;s similar to what the Iraqi government pays members in the security groups, although the students&#8217; paychecks come from the Americans.

The school has 11 programs, ranging from blue-collar skills like vehicle maintenance to office jobs like business management, said Wassan al-Kinnan, the school&#8217;s headmaster. There are no minimum requirements, but a student&#8217;s abilities determine which programs he or she may enroll in. Illiterate students, for example, will go into programs like vehicle maintenance where they can memorize the necessary skills.

Reed, who noted that there are other programs to help those who want to learn to read, said this is done because they want to set up the students to succeed.

The students attend classes from 8 a.m. until 3 p.m. every day but Friday, with 30 minute breaks for prayer and breakfast. The school has 11 teachers, one for each section. It also has one "journeyman" for every 10 students.

The journeymen work closely with the students to teach them the practical side of the lessons. On Thursday, Sadah Bapir, a journeyman instructor who&#8217;s a civil engineer, taught a sewer and water class outside the school. Inside, an instructor named Yasser Kadim helped students in a computer classroom with a Microsoft Office exercise.

The six months students spend attending classes is longer than the three months originally anticipated, although this allows the school to train students in greater depth. Those who pass their classes will receive a certificate. Like an American transcript, not all certificates are equal. The certificates will note each individual&#8217;s skill level to give employers an idea of what the student can do, al-Kinnan said.

"His degree depends on how hard he works and improves his experience," he said.

Falah Hassan, a finance student who used to be a "Sons of Iraq" member, certainly plans to work hard. He was an electrician but wanted to learn bookkeeping skills so he could manage a grocery store.

"It gives you guarantees for the future," he said.

Al-Kinnan is more reluctant to give guarantees, though. The school is just getting started. It is scheduled to last a year, although that can be extended if it is successful. If that doesn&#8217;t happen, the land and all the equipment will return to the local public works department. For now, al-Kinnan, like his students, is just working hard to help the school thrive.

"We are at the beginning," al-Kinnan said. "We go step by step. We don&#8217;t know if these guys will succeed or not. Most of them are eager to study."