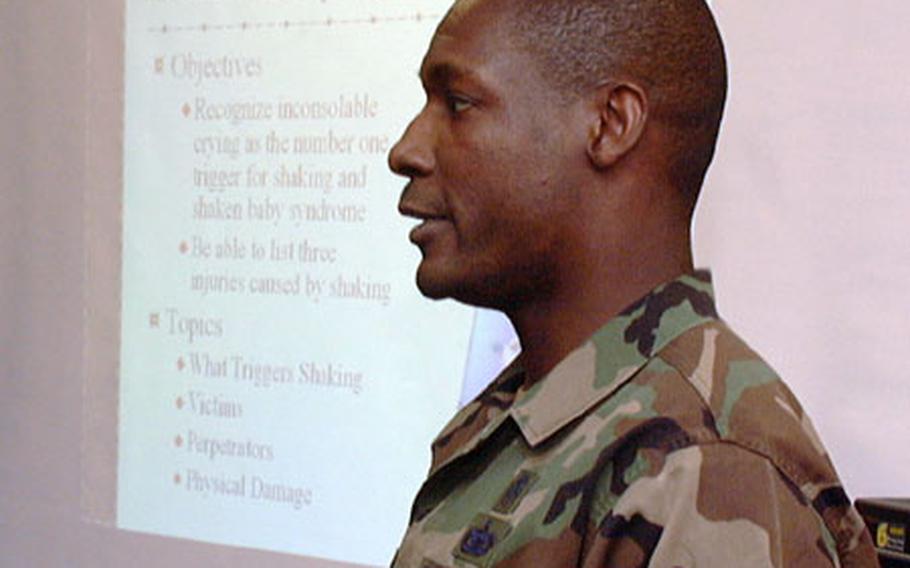 RAF LAKENHEATH, England &#8212; The tape recording of the baby&#8217;s woeful wailing lasted three minutes, long enough to make the new and soon-to-be dads in the room a bit squeamish.

As a veteran father, he was the voice of experience, sharing his acquired wisdom, such as when he cautioned his attentive charges not to make jokes about coming from work and mollifying an unhappy baby.

The point of the class is to reach men who are new or soon-to-be fathers.

It is part of the base&#8217;s New Parents Support Program, which had been targeted toward mothers only or couples. The fathers said they wanted something just for them, said Maj. Nadine Griffin, family advocacy officer.

The curriculum for Dads 101 comes from the National Center on Shaken Baby Syndrome. It addresses everything from gender stereotypes to packing a diaper bag, from bathing a baby to caring for one that won&#8217;t stop crying.

The class, which finished its first series of three sessions on Thursday, attracted more interest than anticipated.

Teachers also weren&#8217;t hard to find. The base is full of them.

One of the instructors, Tech Sgt. Fred Henley, opened the recent session.

&#8220;Showing up here today shows you are really serious about being good fathers,&#8221; he said. Henley is the father of two teenagers and said he joined the fraternity of fatherhood with little to go on but common sense and crossed fingers.

Now, Henley and the others are able to draw on their own experiences as well as the material provided for the class. Inside the classroom, Fate talked about why a baby cries.

Even now, years later, he said, the sound of a crying baby will awaken in him an instinct to jump to the rescue.

The students said the class is worthwhile.

Airman 1st Class Michael Keller has two children, ages 8 months and 2 years, and has no plans for more. But he attended the class anyway, hoping to pick up a pointer or two.

He said the class would have helped him before he first became a father.