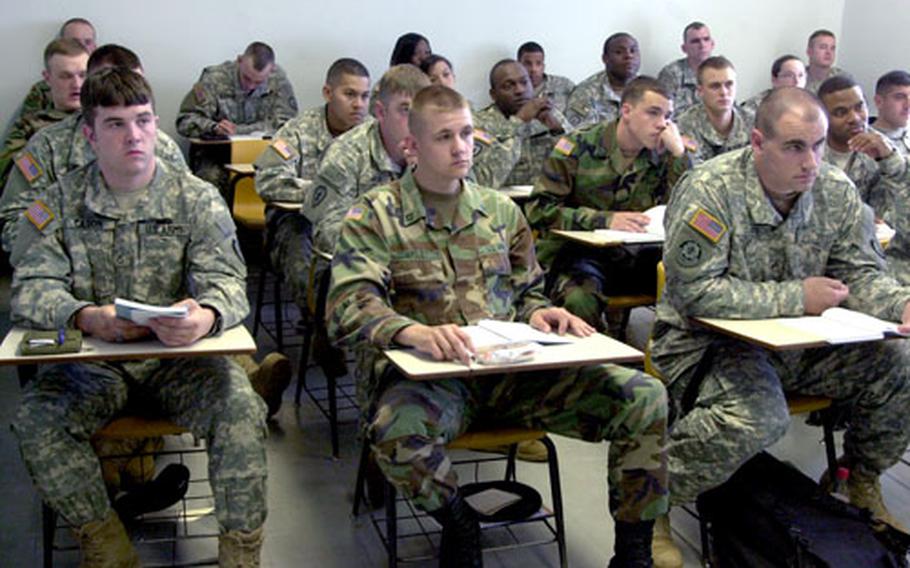 The soldiers of the 2nd Cavalry (Stryker) Regiment are getting a crash course on all things German.

&#8220;For example, in the U.S. it is polite for a man to hold a door open for a woman and let her enter a room first, whereas in Germany the man should always enter first,&#8221; said Dave Baker, Vilseck program manager for Central Texas College.

With the first of 3,500 soldiers who will form the 2nd Cavalry Regiment arriving in Vilseck last week, the Army has hired the college to run the Head Start program for the brigade. Because the entire unit is expected to be on the ground by September, Army officials have increased the German language and culture classes exponentially to meet demand.

The number of classes has gone from three or four a month to 10 or 20 a week, he said. As a result, extra instructors have been brought in to run the extra classes. Ten Head Start instructors will run the program, joined by another five instructors from Bamberg and W&#252;rzburg during big influxes of troops, Baker aid.

&#8220;The instructors are mostly Germans married to American soldiers who have lived in the U.S. We value people who speak English well and have experience living in the U.S. so they can contrast the different cultures,&#8221; he said.

Those contrasts are an important component of Head Start, he said.

One gesture that a puzzled American might make &#8212; tapping his finger to his head &#8212; might be construed as an insult in Germany, where it means &#8220;you are crazy.&#8221; Such a gesture can result in a fine of hundreds of euros, Baker warned.

Another no-no is squeezing fruit or vegetables in a supermarket to test ripeness, he added. &#8220;In Germany it is considered rude to fondle vegetables or produce.&#8221;

And tipping is not required in German restaurants, where the service charge is included in the cost of a meal, Baker said.

Normally, the classes are held at the Vilseck Education Center. Because there are so many classes this time around, classes are also being held at the elementary school or at the the Combined Arms Training Center, he said.

Head Start teaches soldiers basic German &#8212; enough to order food or ask for directions. Unfortunately, the program&#8217;s usual field trip to Amberg has been dropped because of the large numbers of troops, Baker said.

One of the first groups of soldiers to arrive in Germany began the Head Start class on Monday as instructor Tanja Blakeney told them about the difference between dollars and euros.

One of the new arrivals, Pfc. Dustin Cason, 19, of Longview, Texas, said one thing he learned in the class was to take the train instead of a taxi if he wanted to save money.

Another, Pfc. Christian Hipsley, 23, of Baltimore, said he had yet to see much of Germany but that he now knew about German numbers.

&#8220;I stayed at the Edelweiss Lodge and Resort, went hiking in a gorge, walked around the town and saw the Olympic ski-jump stadium,&#8221; he said.

O&#8217;Malley said he was impressed by what he had seen so far.