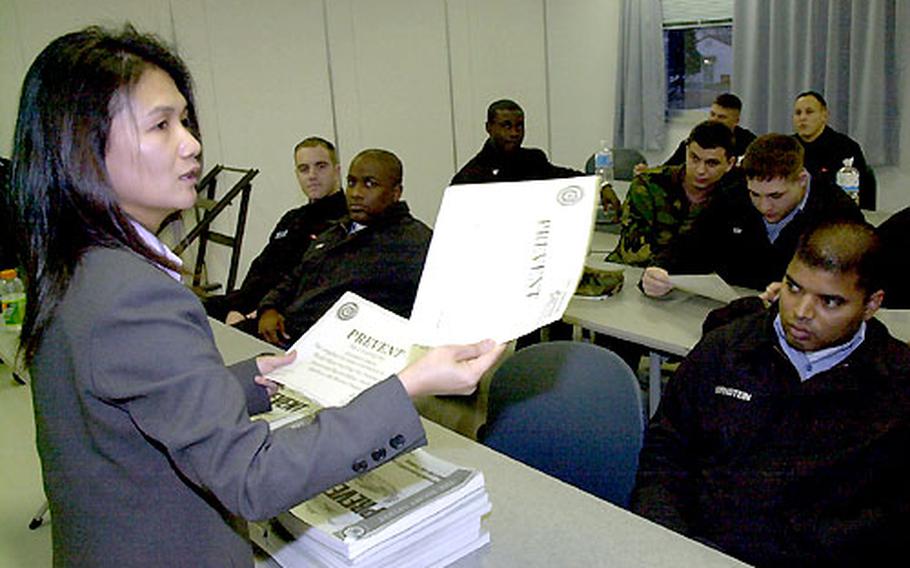 MISAWA NAVAL AIR FACILITY, Japan &#8212; Petty Officer 2nd Class Estuardo Iriarte is making it a point not to imbibe during the holidays.

Estuardo is one of 73 sailors here to attend &#8220;Personal Responsibility and Values: Education and Training,&#8221; or PREVENT.

The class, taught in three sections during the past two weeks, was &#8220;highly recommended&#8221; for sailors ages 18 to 26, said Chief Petty Officer Lester Wellmaker, a hospital corpsman instrumental in bringing the program here for the first time.

A Navy program since 1996, PREVENT has numerous offices overseas and in the United States. The Japan PREVENT office is at Yokosuka Naval Base.

Previously, Misawa sent sailors to Yokosuka to attend the class, Wellmaker said. But he thought coordinating the program with the onset of the holiday season was important, especially at Misawa, where winters can be harsh and sailors away from home for the first time can feel isolated, bored or depressed &#8212; which can lead to further problems.

Although PREVENT is part of the Navy&#8217;s Right Spirit campaign to deglamorize alcohol use, alcohol awareness is just one piece of the PREVENT curriculum, said program facilitator Adele Mamaril. &#8220;We talk about behavior, values, their beliefs and how to make better decisions,&#8221; she said. &#8220;It&#8217;s about making better choices.&#8221;

Other major topics covered during the three days include interpersonal responsibility, personal finances, health and readiness.

Alcohol use can also contribute to overspending and other consequences, Mamaril said. &#8220;The biggest risk is when they make compulsive decisions,&#8221; she said, &#8220;such as when they go out with their peers and decide to drink without limit.&#8221;

Sailors usually know the risks of such behavior &#8212; everything from catching a sexually transmitted disease to getting into a bar fight, Mamaril said. But PREVENT teaches them how to manage the risks: Sailors develop an action plan that addresses how to fix a behavior or habit they&#8217;d like to improve.

Petty Officer 3rd Class Sydney James chose to monitor his alcohol consumption during weekends. Consequences of drinking too much aren&#8217;t worth it, he said. He plans to track and limit his number of drinks per hour.