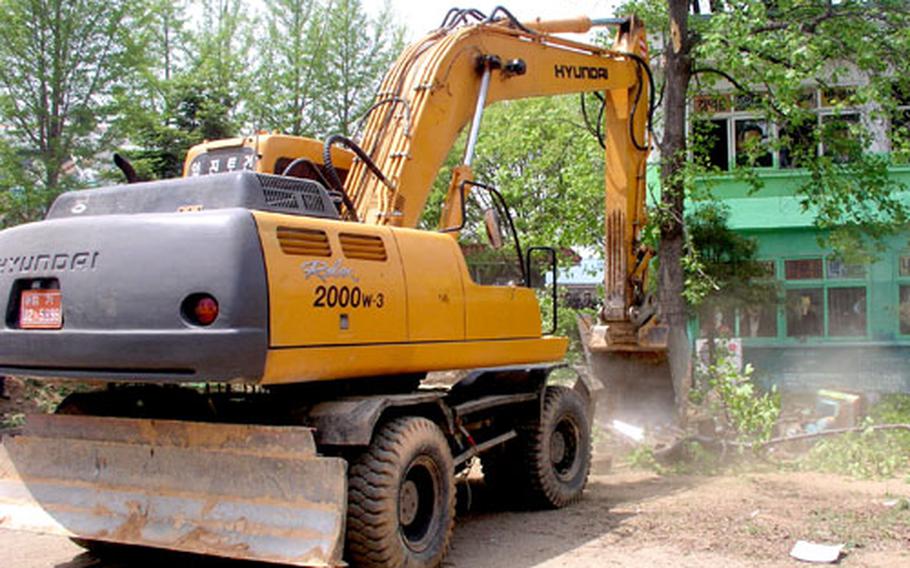 An earth-mover uproots a tree Thursday several hours before the start of demolition of the Daechu-ri Elementary School during the South Korean government’s operation to oust protesters from the school grounds. The school, near Camp Humphreys, had become a headquarters for those opposing a U.S.-South Korean plan that would see Camp Humphreys eventually become the biggest U.S. installation on the peninsula. (Franklin Fisher / S&S)

An earth-mover uproots a tree Thursday several hours before the start of demolition of the Daechu-ri Elementary School during the South Korean government’s operation to oust protesters from the school grounds. The school, near Camp Humphreys, had become a headquarters for those opposing a U.S.-South Korean plan that would see Camp Humphreys eventually become the biggest U.S. installation on the peninsula. (Franklin Fisher / S&S) South Korean police Thursday lead off the last group of protesters from the roof of the former Daechu-ri Elementary School. (Franklin Fisher / S&S)

PYEONGTAEK, South Korea &#8212; Activists opposing the planned expansion of Camp Humphreys clashed Friday with South Korean police and soldiers near Camp Humphreys, just one day after the massive government operation that saw police oust activists from a school they&#8217;d used as a base for protest activities, the Yonhap news agency reported.

Yonhap said the protesters Friday numbered in the hundreds. About 10 soldiers were injured, two of them severely, Yonhap reported.

Friday&#8217;s clash occurred in the fields of Daechu-ri, where on Thursday police stormed the Daechu-ri Elementary School compound. They arrested hundreds of protesters, work crews demolished the school and soldiers erected miles of fencing to seal the area against intruders or illegal farming.

Camp Humphreys is slated to triple in size and become the U.S. military&#8217;s main installation on the peninsula under a U.S.&#8211;South Korean agreement. The former elementary school was yards from Camp Humphreys, in Pyeongtaek.

As a precaution against outbreaks like that which occurred Friday, officials at Camp Humphreys have extended travel restrictions for military community members until further notice, said Susan Barkley, a spokeswoman for the Area III Support Activity at Camp Humphreys.

The Humphreys elementary school was closed Thursday and Friday as a safety measure. &#8220;If schools are closed Monday,&#8221; Barkley said, &#8220;an announcement will be made sometime Sunday.&#8221;

Camp Humphreys-Osan Air Base school bus service also was halted on those days. Students busing to Osan American School were excused from classes. &#8220;If the schools are open, the school buses will be running&#8221; on Monday, Barkley said.

Off-limits to the military community until further notice was travel in Daechu-ri, Bonjong-ri, Wonjong-ni and Shindo-ri, except for those going to or from work. Only &#8220;essential&#8221; military vehicles were to operate outside post.

A sign posted at Osan Air Base said Camp Humphreys is off-limits.

Police stormed the school compound around 9:20 a.m. and by 5 p.m. had cleared it of protesters.

Police arrested some 400 people and said they planned to hold them for prosecution. No further details were available Friday on those injured Thursday &#8212; 110 officers and 100 protesters &#8212; who police said were taken to area hospitals, or on those injured Friday.

Government officials Thursday said security forces would remain in the area, which would be kept under restricted access rules common to military installations.

The conflict leading to Thursday&#8217;s operation has centered on South Korea&#8217;s purchase in 2005 of 2,328 acres of farmland, a tract that includes Daechu-ri.

Many residents accepted the government&#8217;s compensation package and moved out but others refused. Political activists opposing the U.S. military presence in South Korea have organized local opposition to the expansion. Some activists set up a makeshift headquarters in the school, which had been closed for years. They refused a government order to vacate the grounds.