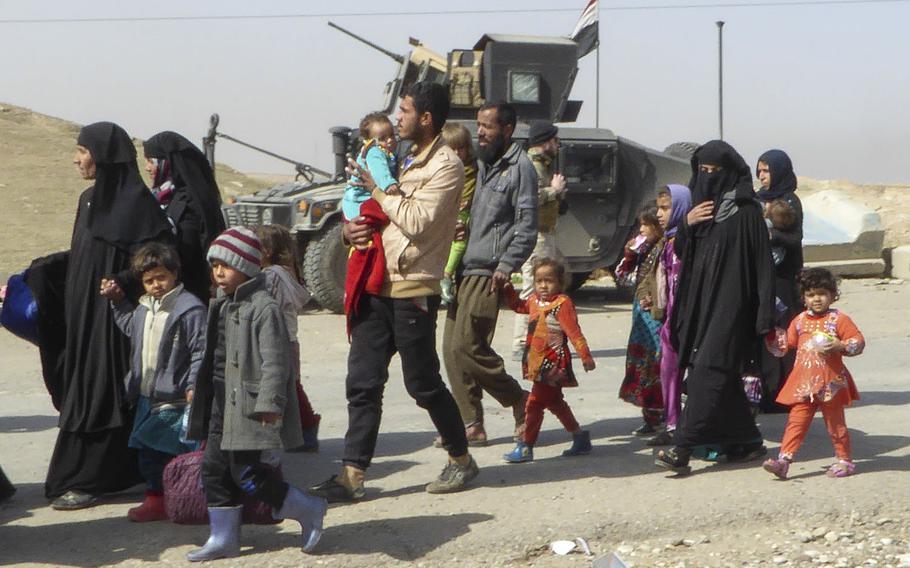 Buy Photo
Pictured here are some of the roughly 100 Iraqi civilians who fled Mosul on the Mosul-Baghdad Highway on Tuesday, Feb. 28, 2017, as Iraqi troops prepared to advance on the Mosul neighborhood of Wadi Hajar. About 10,000 civilians have been displaced since fighting began in western Mosul on Feb. 19, in addition to more than 200,000 displaced when the offensive began in eastern Mosul on Oct. 17, 2016. (Chad Garland/Stars and Stripes)

IRBIL, Iraq — Five children and two women were receiving treatment this week for apparent exposure to a blistering chemical agent near Mosul, the Islamic State group’s last major stronghold in Iraq, the International Committee of the Red Cross said Friday.

The seven civilians were admitted at Rozhawa hospital near Mosul in the past two days. They showed symptoms consistent with toxic chemical exposure, including blisters, redness in the eyes, irritation, vomiting and coughing, the statement said.

It was not immediately clear who was responsible for the attacks, but the Pentagon has warned the Islamic State would use chemical weapons against U.S.-backed Iraqi forces fighting to retake Mosul.

An independent analysis by London-based intelligence collection and analysis service IHS Conflict Monitor in November said the militant group, led by Abu Bakr al-Baghdadi, had used chemical weapons — including chlorine and sulfur mustard agents — at least 52 times in Iraq and Syria since 2014.

The ICRC said its medical teams were supporting local medical staff treating the patients. The teams had also provided special medical kits and training for treating gas attack victims at clinics in the area around Mosul, the organization said.

Iraqi forces retook the eastern side of the city, which is bisected by the Tigris River, in late January after 100 days of fighting. The Iraqis launched a campaign to liberate the western half of the city on Feb. 19.

Since the start of the offensive in October, hundreds of thousands of civilians have fled the fighting in and around the city. Human rights organizations, fleeing civilians and medics on the front lines have accused the militants of deliberately attacking civilians.