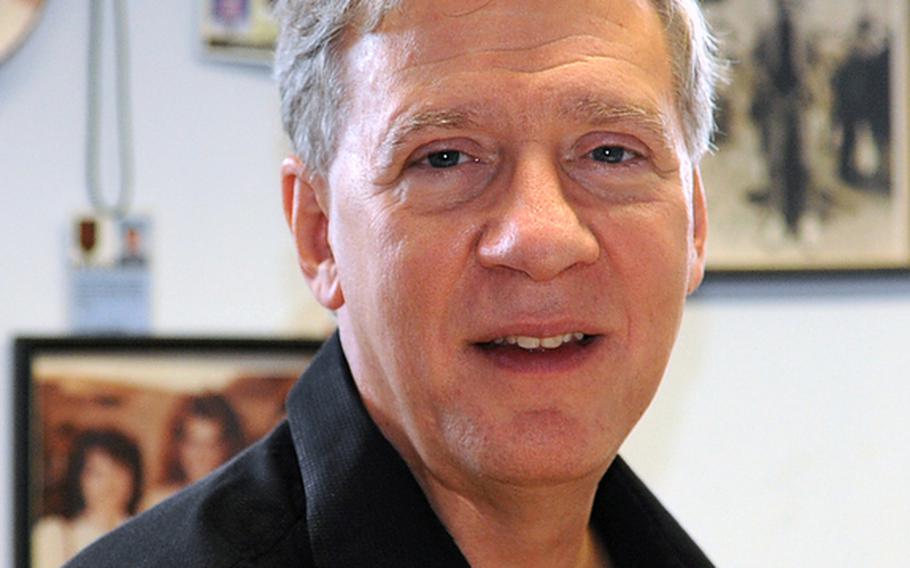 Buy Photo
George Smith, 58, seen here in his office at AFN headquarters in Mannheim, Germany, is one of thousands of Defense Department employees overseas who could be affected by stricter guidelines recently issued by DOD making it much more difficult for civilians to extend their overseas tours past five or seven years. Smith has worked in Europe for more than 25 years and currently oversees eight AFN stations in Europe. (Michael Abrams/Stars and Stripes)

Buy Photo
George Smith, 58, seen here in his office at AFN headquarters in Mannheim, Germany, is one of thousands of Defense Department employees overseas who could be affected by stricter guidelines recently issued by DOD making it much more difficult for civilians to extend their overseas tours past five or seven years. Smith has worked in Europe for more than 25 years and currently oversees eight AFN stations in Europe. (Michael Abrams/Stars and Stripes) Buy Photo
George Smith, 58, posing here in a radio studio at AFN headquarters in Mannheim, Germany, is one of thousands of Defense Department employees overseas who could be affected by stricter guidelines recently issued by DOD making it much more difficult for civilians to extend their overseas tours past five or seven years. Smith has worked in Europe for more than 25 years and currently oversees eight AFN stations in Europe. (Michael Abrams/Stars and Stripes)

KAISERSLAUTERN, Germany &mdash; When George Smith came to Europe in January 1987 as the civilian in charge of the American Forces Network station at Nuremberg, he knew his tour could be capped at five years under Defense Department regulations.

More than 25 years later, Smith is still in Germany, overseeing eight AFN stations as the network&rsquo;s Europe operations manager. He has a German wife and two teenagers attending German school.

Under the Defense Department&rsquo;s long-standing &ldquo;five-year rule,&rdquo; Smith had to seek an exception to the policy to extend his tour for two-year increments. Each time, his supervisors approved the extension.

Now Smith and other civilians who have remained overseas for many years may soon be looking for a job stateside due to a revised DOD policy that requires commands to provide more justification for tour extensions and puts the decision in the hands of a higher authority.

&ldquo;We&rsquo;ve always had the overseas rotation policy,&rdquo; Sheila Dent, the DOD&rsquo;s acting director of human resources for operational programs and advisory services, said in a recent interview. &ldquo;We&rsquo;re just fine-tuning what we already had in place to meet the mission readiness.&rdquo;

Even though DOD has had a five-year rule since 1966, some organizations have interpreted that policy more liberally than others, according to interviews with several civilian personnel officials overseas.

The new policy reminds managers that people should not be routinely extended and requires a much stronger business case for an extension, they said. The result: It will be difficult to retain someone long-term unless a qualified replacement can&rsquo;t be found.

&ldquo;It can&rsquo;t just be because this person has done a good job or this person knows the area,&rdquo; said Vera Garcia, U.S. Army Europe deputy director of civilian personnel. &ldquo;We are going to have to make the case, &lsquo;This is the only person that can do it.&rsquo;&thinsp;&rdquo;

The first two-year extension after five years allows managers to look for a replacement, said an Air Force human resources specialist. To get a second extension, a manager would have to show why recruitment efforts didn&rsquo;t result in a suitable replacement, she said.

The revised policy, which went into effect in July, still allows the military components wide discretion in setting the authority level for approving that initial two-year extension beyond five years. Commands have to request the delegation of that approval authority from the head of their respective military or DOD component, but have flexibility on how far down the chain of command that decision can go.

Any subsequent extension &mdash; that is, anything beyond seven years &mdash; requires approval from the head of the military or DOD component that employs the civilian seeking the extension or an official at the major command or equivalent level who has been delegated approval authority.

Previously, components could set approval authority for tour extensions at any level, though typically it was a decision made by the installation commander or by a senior staff section supervisor, DOD officials said.

At USAREUR, for example, where 1,471 employees are currently subject to the five-year rule, extension approvals used to be made by a general officer or senior-ranking civilian within an employee&rsquo;s staff section, USAREUR officials said. Extensions up to seven years now will go to the USAREUR deputy commanding general, and anything beyond that, to the USAREUR commander, a three-star position.

&ldquo;This is a DOD directive and USAREUR will comply with the changes to the policy,&rdquo; said Col. Rumi Nielson-Green, USAREUR spokeswoman. &ldquo;We are confident, however, in our ability to maintain a mission-ready, professional workforce.&rdquo;

For civilians working for Installation Management Command-Europe, extensions beyond seven years now have to be approved by IMCOM&rsquo;s commander, a three-star general based in Texas.

Officials with U.S. Air Forces in Europe said last week that they are still awaiting specific guidance from the Air Force for implementing the revised DOD policy, including whether there will be any approval authority changes for tour extensions.

The rule applies to civilian DOD employees in permanent positions that are funded by Congress &mdash; so-called appropriated-funds jobs. After the five-year tour &mdash; if no extension is granted &mdash; the employee must return to the United States if he or she wants to remain in government service as an appropriated fund employee, where a job is guaranteed.

Civilians without &ldquo;return rights&rdquo; to a job they left in the U.S. can compete for one. Or, a &ldquo;priority placement&rdquo; program tries to match their skills and grade to a vacant position in the States, though employees don&rsquo;t always get to choose the job or their geographic location and can be terminated if they don&rsquo;t accept what&rsquo;s offered them.

The rotation policy doesn&rsquo;t apply to civilians paid from non-appropriated funds, since those employees fall under a different set of rules, Dent said. Family members of military and civilian employees, who are on assignment overseas, also are exempt. Currently, there are about 33,400 DOD appropriated-fund civilian employees working overseas, according to government officials. Of that number, about 16,200 &mdash; 48 percent &mdash; are subject to the five-year rotation policy, the officials said.

Another change in the new policy requires that civilians reside in the states for two years, instead of 12 months, before accepting another overseas posting. Also, certain positions, such as host nation advisers and senior executive service jobs, are no longer exempt from the five-year rule.

&ldquo;You don&rsquo;t want to put the department in the position of having one person know that (job) because when that person leaves, how do you replace that person?&rdquo; Dent said. &ldquo;We want to make sure we keep that pipeline growing and we refresh that knowledge base.&rdquo;

The rotation policy can be a powerful recruiting tool, Dent said. &ldquo;To go all over the world with department support and then to bring that knowledge and talent back to the states &hellip; I think that is a great investment for the department and a great tool to recruit and retain and develop the talent we need.&rdquo;

The new guidance has stirred up an old debate on the merits of a mandatory rotation policy for DOD civilians overseas, particularly at a time when the military is drawing down in Europe and the Pentagon is facing serious budget cuts.

Some civilians say it&rsquo;s about time DOD strengthened the policy, arguing that the rule has been applied unevenly and unfairly over the years.

&ldquo;I welcome this &mdash; it will create more opportunities for qualified candidates from the states,&rdquo; a commenter wrote in August at FederalSoup.com, an online community of forums for active and retired federal employees. &ldquo;Anything is better than the guys parking their butts for 15 years and doing everything they can not to come back.&rdquo;

A post in August at Everything KMC, an online forum for Kaiserslautern Military Community residents, said, &ldquo;We&rsquo;re in a huge budget crunch, yet DOD has no problem with paying huge sums of money to move people and all of their belongings between countries.&rdquo;

Dent said the department isn&rsquo;t expecting to see a dramatic rise in personnel rotation costs &ldquo;because this has always been our policy.&rdquo;

A USAREUR official said &ldquo;we are anticipating some change in PCS costs, but not a large change.&rdquo;

A DOD statement provided by the office of Sen. Carl Levin, chairman of the Armed Services Committee, said: &ldquo;An effective succession plan balances the rotation of individuals so the continuity of operations would not be diminished or the fiscal requirements burdensome. Similar to the military rotation, the cost of rotation is outweighed by the benefit to the department from the experience and broadened perspectives gained by overseas returnees.&rdquo;

Some civilian employees have emailed Stars and Stripes expressing concern about the new guidance. Some agreed to be interviewed, but most requested anonymity for fear of reprisal or for painting their organization in an unfavorable light.

One civilian official in the Pacific, speaking on condition of anonymity, said making civilians rotate almost as frequently as the active-duty force reduces the continuity civilians have provided to commands overseas, where expertise and on-the-ground knowledge are essential.

Some wonder what the effect will be on organizations that employ civilians in jobs that require highly specialized skills or degrees, such as Landstul Regional Medical Center. Of the 850 civilians employed at LRMC subject to the five-year rule, 56 are physicians and 198 are registered nurses, according to hospital officials. Among nurses, who are in short supply stateside, 26 are currently serving beyond five years, including eight who have been employed longer than 10 years.

&ldquo;We&rsquo;re in a globalized world,&rdquo; he said. &ldquo;We need a civilian workforce that understands how IMCOM operates as a whole.&rdquo;

The new guidance requires organizations &ldquo;to make a business case&rdquo; for a tour extension, Thomas said. &ldquo;It&rsquo;s based on the needs of the government &hellip; it&rsquo;s not based on whether Joe&rsquo;s a nice guy.&rdquo;

Stars and Stripes reporter Charlie Reed in the Pacific contributed to this story.