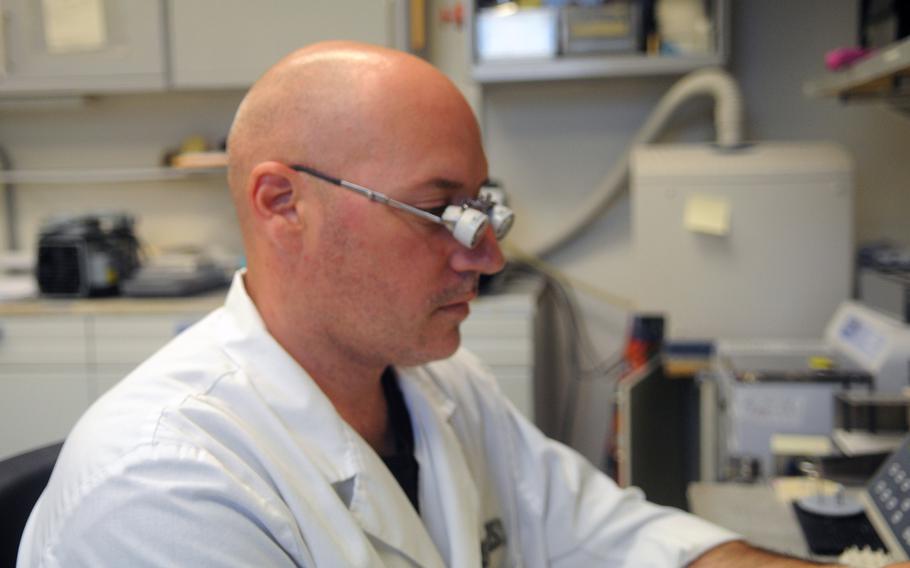 STUTTGART, Germany — When Steve Gonsalves left active duty nine years ago, he was advised by Army human resources to take a non-appropriated fund job to stay in Germany and wait for a government service job with living quarters allowance to open up.

Now, faced with the prospect of having to repay more than $300,000 in living allowance the military says he was not entitled to, Gonsalves says he doesn’t know whom he can trust.

A dental technician by training, a position in his field eventually opened in late 2005 that included Living Quarters Allowance. Since then, he’s crafted false teeth and dental crowns for troops at military communities in Darmstadt, Mannheim and Stuttgart. With each move, housing allowance was approved. Now, the Defense Department says it was wrong and wants its money back. All $333,000 of it.

“They’re saying I should sign this debt waiver request,” said Gonsalves. “I’m not signing anything. Not now. I’m not acknowledging any debt.”

In the days and weeks ahead, bookkeepers from the Defense Finance and Accounting Services will be heading overseas to meet with Defense Department civilians who are among 659 workers who an audit found were receiving the housing benefit in error.

Though the Defense Department has acknowledged the workers are not at fault, it says that without approval of a special debt waiver request, it is obligated to recoup all past housing allowance payments.

Now, affected overseas workers, ranging from health care personnel to cybersecurity and intelligence analysts, are facing a dilemma as they prepare to sit down with the DOD bookkeepers: Acknowledge their debt and hope a waiver request is approved or engage in a potentially lengthy appeals process with no guarantee that DOD will change its position.

“Why are they pushing us to do the waiver requests? It’s to pass the responsibility on to us. But if we start signing, we’re taking legal responsibility,” said a Germany-based civilian counter-terrorism official, who asked not to be identified due to the nature of his work.

The Defense Finance and Accounting Service acknowledges there are no guarantees waivers will be granted. However, during a recent U.S. Army Europe town hall meeting for affected workers, DFAS officials said the Defense Office of Hearings and Appeals generally follows its recommendations. Still, many workers have their doubts.

In late 2011, Defense Department officials became aware that hundreds of workers could be receiving housing benefits in error in connection with an Office of Personnel Management decision on rules governing who is eligible for the allowance. But while DOD says it is obligated to follow the 2011 OPM interpretation of housing allowance rules, workers argue that decision shouldn’t be applied retroactively to people hired years earlier under old interpretations of the rule.

Many of those civilians found to be receiving LQA “erroneously” had worked for more than one employer overseas, an apparent violation of State Department regulations, which apply to DOD civilians. Others had worked in non-appropriated fund jobs overseas without LQA before gaining employment in government jobs that included LQA benefits.

DOD’s decision to terminate housing allowances after a temporary extension expires in May coupled with a refusal to grant a blanket debt waiver for all affected workers, has generated enormous angst within the workforce. In addition to potential debt, the loss of housing allowances makes working overseas financially untenable, according to many workers, some of whom also face the loss of transportation rights back to the States. With DOD hiring freezes and limited job prospects in the States, the added burden of paying out of pocket for moves back home has many workers concerned for their financial well being.

“I know this continues to be an emotional and stressful time for all of you,” U.S. Army Europe commander Lt. Gen. Donald Campbell said during a town hall meeting with workers across Europe last week. Campbell said he favors an alternative resolution, such as an exception to policy to allow workers to continue receiving housing benefits, but that it remains unclear if DOD would change its position.

In recent months, many employees have fought DOD’s decision, launching congressional letter writing campaigns as part of an effort to win support from Washington lawmakers. Those efforts have begun to gain some traction, with several members of Congress taking up the issue.

While DOD has acknowledged that an “unusual circumstances” waiver could be granted that allows workers to continue receiving housing benefits, it has so far pressed ahead with plans to sever housing allowance payments.

Numerous senior overseas military commanders also have argued the DOD should issue a blanket debt relief waiver for workers and restore housing benefits so they can finish out their assignments under the original terms they were hired under.

In an email to one of the affected workers on Friday, Army chief Gen. Ray Odierno also offered words of support and indicated that the Office of the Secretary of Defense isn’t done with the issue.

“My staff is working with the Office of the Secretary of Defense (OSD) to ensure they understand concerns and the impact it has had on many of our great employees,” Odierno wrote. “My fellow Service Chiefs and the Combatant Commanders have engaged OSD personally on the severity of this issue and resultant negative impact on our workforce. We expect follow-on guidance from OSD to chart a way forward shortly.”

“The erroneous payments of LQA stemmed from agency misinterpretation of complex U.S. Department of State Standardized Regulations and administrative processing errors, and were not related to any actions these employees took or failed to take,” McHugh wrote in a memo issued to DFAS on Tuesday that offered his support for eliminating the debts workers face. “The collection of these debts would be against equity and good conscience, and not in the best interests of the United States.”

With so many high powered supporters, Gonsalves said he doesn’t understand why DOD’s office of Personnel and Readiness hasn’t changed its position.

“I don’t know where they’re going with this thing,” Gonsalves said. “I just hope the generals can make it go away.”