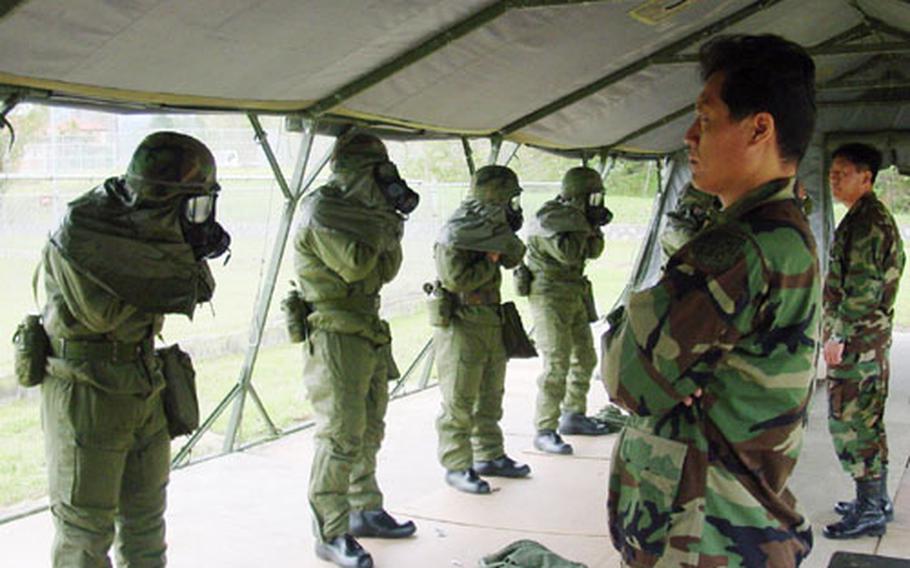 Evaluators watch as members of the 37th KSC Company put on their M40 protective masks during a training test at Camp Carroll. (Courtesy of U.S. Army)

Evaluators watch as members of the 37th KSC Company put on their M40 protective masks during a training test at Camp Carroll. (Courtesy of U.S. Army) 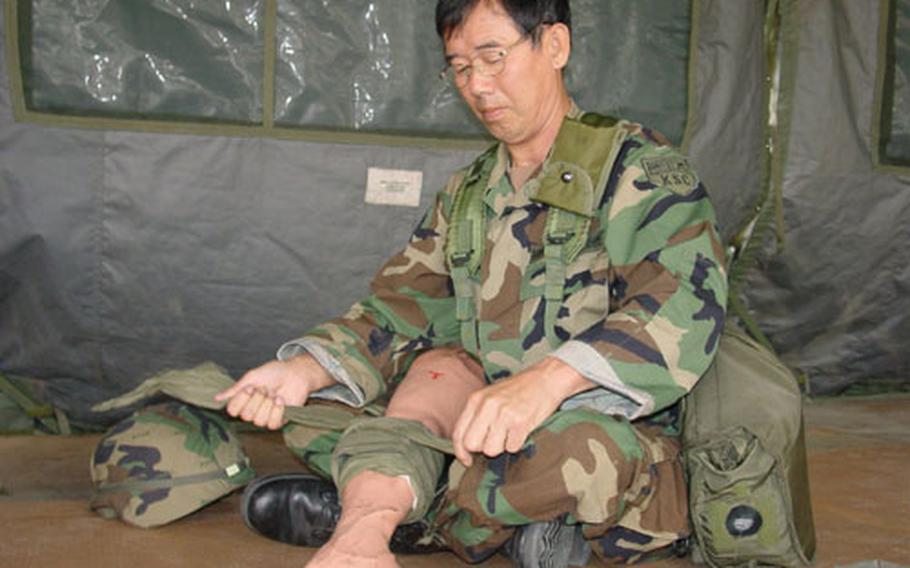 OSAN AIR BASE, South Korea &#8212; Leaders of a U.S. Army unit made up of South Korean laborers will meet next month to fine-tune next year&#8217;s battlefield training plans.

In wartime, they build fortifications and bridges, drive ambulances and ammunition trucks, and recover dead and wounded troops, among other tasks. The unit is part of the South Korea-based 8th U.S. Army.

Last month, the 37th KSC became the last of the battalion&#8217;s 15 companies to complete their annual combat skills test, known as CTT (common task training). The companies receive 40 hours of CTT per year.

&#8220;CTT is vital for one&#8217;s self-survival in wartime,&#8221; said Kim Tae-young, the 37th KSC Company&#8217;s commander. &#8220;All KSC personnel should be able to protect themselves from hazardous situations to accomplish their missions. For instance, during a gas attack, they should know how to wear their masks and appropriate &#8230; gear fast and correctly.&#8221;

Mullen said tasks likely to get more emphasis in next year&#8217;s training schedule are mouth-to-mouth resuscitation and getting the gas mask on and off quickly. As noncombatant civilians, KSCs are forbidden to use weapons in wartime. But the unit trains them in weapon safety in case they have to recover them from the battlefield.

The &#8220;employees are going to find weapons out on the battlefield &#8230; and we want to make sure those employees can render those weapons safe without harming friendlies and themselves,&#8221; Mullen said.

Headquartered at Seoul&#8217;s Camp Kim, the battalion has a peacetime strength of 2,185 personnel, located from near the Demilitarized Zone in the north to as far south as Pusan, South Korea&#8217;s strategically important main seaport.

If the KSC were mobilized this calendar year, it would grow to 27,000 personnel in 162 companies.

But under new plans that take effect after this year, wartime would bring the battalion to 33,000 personnel in 192 companies, Mullen said.