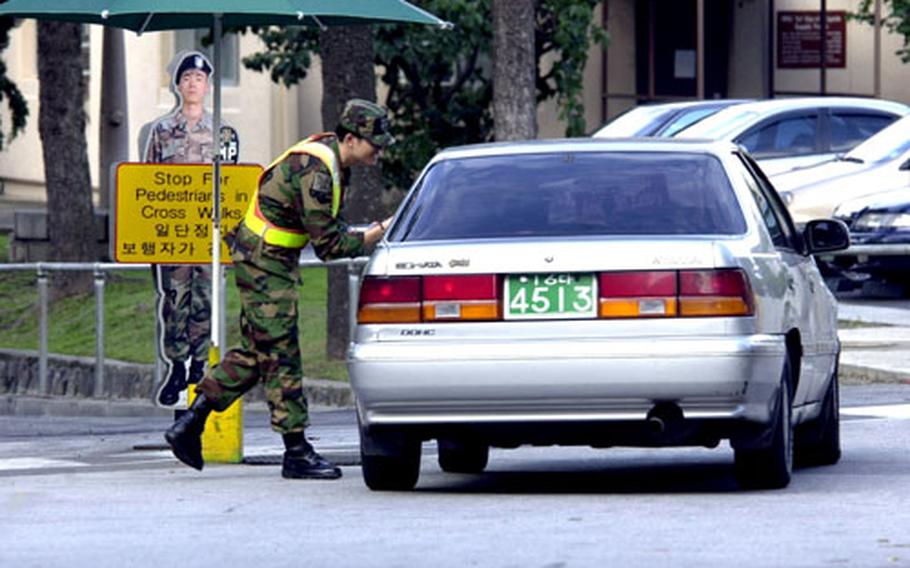 SEOUL &#8212; Recent news reports blasting civilian contracted security at a handful of Army bases in the States &#8212; and the U.S. European Command&#8217;s decision last week to conduct a comprehensive force protection assessment of all installations and facilities in the theater &#8212; should not worry base residents in South Korea, officials here said.

That&#8217;s because anyone seeking to enter an installation here illegally would be up against multiple layers of gate security controls, including Korean National Police who patrol outside the bases, the 1,400 civilian guards who work inside the gates and the soldiers and technology that round out the package.

The release did not indicate if the action was in response to an Aug. 9 incident involving three anti-war protesters who cut a hole in the fence and entered Patch Barracks, EUCOM&#8217;s headquarters, located in Stuttgart, Germany. The protesters walked around the base unchallenged, hung a banner and later walked out the gate and turned themselves in, according to a Sept. 28 report in the Europe edition of Stars and Stripes.

Jones said in the release that although security procedures at EUCOM installations are good, force protection can never be treated as &#8220;business as usual.&#8221;

In the United States, according to the Associated Press, the Service Employees International Union recently contended that job screening was often inadequate and security checks at gates frequently shoddy because of lack of manpower. The union said security work at seven U.S. Army bases were awarded under no-bid contracts to an Alaska firm that subcontracted the work to Wackenhut, the second largest security business in the United States. The union&#8217;s report cited complaints by guards who claimed a lack of adequate training and staffing.

U.S. Forces Korea officials said that while force protection is &#8220;paramount&#8221; on the peninsula, the command has not directed a specific assessment.

&#8220;We routinely exercise our force protection capabilities and seek out ways to improve our procedures and processes,&#8221; USFK officials stated via an e-mail late last week.

The &#8220;procedure&#8221; most visible to base residents are civilian members of a contracted South Korean security force who man the gates in camouflage uniforms, checking every identification card.

The U.S. Army for decades successfully has used such guards for base security, officials said when asked about recent reports of problems with civilian security contractors at stateside bases.

Paul Stuart, who has lived on military installations in Korea for 11 years, said he doesn&#8217;t sense any sort of community dissatisfaction with the contracted guards. Stuart is the chief of operations division, Korea Region Office, Installation Management Agency.

The contractors, Stuart said, relieve the uniformed military of having to provide a portion of base security.

Group 4 FALCK is the Korean company with the current interim contract, officials said.

Mike Cooper, director of contracts with the Contracting Command Korea, said a new five-year, $31.6 million contract should go into effect by the beginning of 2006.

The contracted company is responsible for hiring and training its employees in accordance with an &#8220;individual reliability program&#8221; detailed in Army Regulation 190-56.

The guards must be proficient in 38 tasks, from knowing the standards of conduct to working the identification card system, Stuart said. And the contractor is required to keep detailed records that U.S. officials can inspect at any time.

The U.S. Army furnishes the weapons and ammunition, Stuart said.

But under the upcoming contract, the company will take more responsibility in running the weapons ranges, Stuart said.

U.S. senior surveillance inspectors at the installations have day-to-day interaction with the guards, Stuart said.

Until the early 1990s, all the guards were &#8220;direct-hire&#8221; employees who worked for the U.S. government, said George Stillwell, chief of physical security for the USFK Provost Marshal&#8217;s office.

Stillwell was involved in an extensive study at the time that determined it would be easier &#8212; and cheaper &#8212; to use contracted employees.

The Army stopped hiring guards and sought contractors, Stillwell said. There are still about 60 direct-hire guards who will phase out of the system through attrition.

Both Stuart and Kincaid stressed that the contracted gate guards aren&#8217;t the only security on base.

&#8220;They are one piece of a comprehensive security plan&#8221; that includes military police, unit police and technological tools like motion sensors, Kincaid said.

Installation commanders can choose to boost security at the gates, an option they exercise at Area 1 bases near the Korean de-militarized zone, where contracted guards stand next to armed soldiers at the gates.

One example is the occasional television news story in which a reporter will secretly film himself bribing his way onto a U.S. installation &#8212; usually the first step in getting footage of South Koreans illegally gambling on base slot machines.

Stuart said when that or another performance problem arises with a guard, appropriate investigations are conducted and, if needed, measures are taken.

&#8220;The military communities have a different perspective&#8221; about security, he said.

Another factor in local security is the Korean National Police who patrol outside U.S. military installations 24-hours-a-day, year- round.

Neither the KNP nor Ministry of National Defense officials would state how many riot police stand duty outside U.S. bases on a daily basis.

Ok Jung-hun, with the KNP&#8217;s security division, said the riot police are there to prevent surprise attacks on the bases, usually carried out by protest groups angry with the U.S. military presence in South Korea.

&#8220;Having KNPs outside our gates definitely enhances our security,&#8221; while demonstrating support from the host-nation, Kincaid said.

Airmen have guard duty for Air Force in S. Korea

Security forces airmen also guard key locations such as base gates and those of certain compounds within the base, among other routine security duties.