Dr. Kristen Nelson checks out Karina Patton, 6 months, at the pediatrics clinic at RAF Lakenheath, England. Nelson, the wife of an Air Force surgeon, has volunteered her services at the clinic for the past year. (Ron Jensen / S&S)

Dr. Kristen Nelson checks out Karina Patton, 6 months, at the pediatrics clinic at RAF Lakenheath, England. Nelson, the wife of an Air Force surgeon, has volunteered her services at the clinic for the past year. (Ron Jensen / S&S) 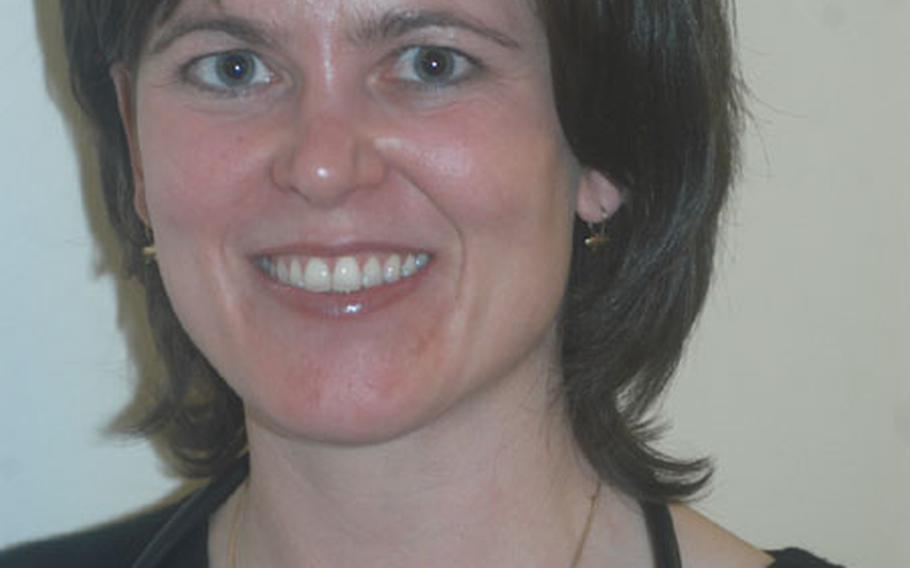 Dr. Kirsten Nelson is a volunteer pediatrician at RAF Lakenheath, England, where her husband is assigned. (Ron Jensen / S&S)

RAF LAKENHEATH, England &#8212; Dr. Kirsten Nelson was entering an unknown universe when she married a military doctor. Growing up in Glenwood, a small town in Minnesota, had not exposed her to the lives of her country&#8217;s uniformed services.

That would be Dr. (Maj.) Eric Nelson, who was studying at the University of Minnesota Medical School when the two of them met, fell in love and got married.

For the major, the future was clear &#8212; follow wherever the Air Force sent him.

For his wife, it meant putting on hold her career as a pediatrician to go where he went.

But Nelson has spent the past year as a volunteer pediatrician at the hospital at RAF Lakenheath, England, where her husband is an orthopedic surgeon.

Her presence has been helpful during a year when the operations tempo was high.

Dr. (Col.) James King, commander of the 48th Medical Operations Squadron, said Nelson&#8217;s volunteer efforts helped take the load off of the regular staff. Nelson has seen more than 200 patients since she started.

&#8220;When premature twins were delivered here at the hospital in January, all four of our active-duty staff pediatricians were tied up for the entire day,&#8221; he said.

Nelson rushed in to care for the patients with acute problems that day, he said.

The desire to be a physician came early to Nelson. She received a doctor kit for her third birthday.

Concerns about a volunteer physician on staff prevented Nelson from practicing her profession when she first arrived in England. That was a disappointment, but she made the most of it in other ways, spending more time with her children, Zachary, 5, and Karina, 2.

It also provided her with time to become involved as a key spouse, a volunteer position that requires her to help spouses who are new to the squadron and those with a spouse of their own on deployment.

Nelson started out as a new volunteer, but became the key spouse for the entire medical group, which has nearly 640 active-duty members.

She produced a newsletter, prepared a seminar for spouses about to be reunited at the end of a deployment and created a program offering three home-cooked meals a day for new parents.

And then, one year ago, the decision was made that a volunteer doc was not a bad thing. Nelson slipped back into her role as pediatrician as easily as one slips into a familiar pair of slippers.

King said there was no problem with a volunteer providing care. Nelson, he said, was put through the same &#8220;rigorous credentialing process&#8221; all other doctors undergo.

&#8220;There has never been any concern expressed that a volunteer physician was not providing the same standard of care as our other excellent pediatric providers,&#8221; he said.

Nelson will soon leave England for her husband&#8217;s next duty assignment. But she will take with her fond memories of her first experience as a military spouse.

She is no longer na&#239;ve about the military and has many people to thank.

The experience has taught her about the stresses placed on military families and given her a new appreciation, she said, for &#8220;what people do to protect our freedom.&#8221;