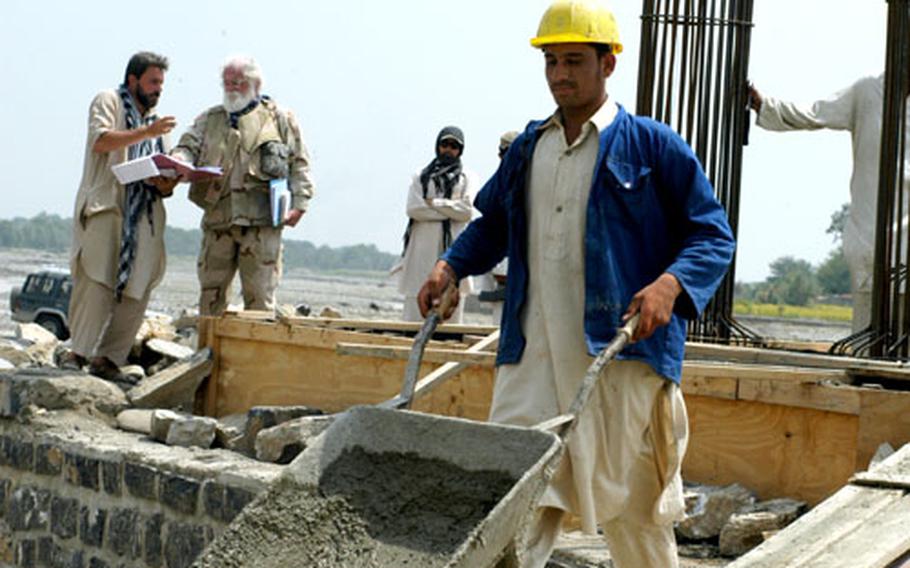 An Afghan worker pushes a wheelbarrow away from the Dadwal Bridge in Khost province while U.S. Army Corps of Engineer liaison Michael Butler discusses progress on the bridge with the Turkish contractor supervising the project. (Bryan Mitchell / S&S)

An Afghan worker pushes a wheelbarrow away from the Dadwal Bridge in Khost province while U.S. Army Corps of Engineer liaison Michael Butler discusses progress on the bridge with the Turkish contractor supervising the project. (Bryan Mitchell / S&S) 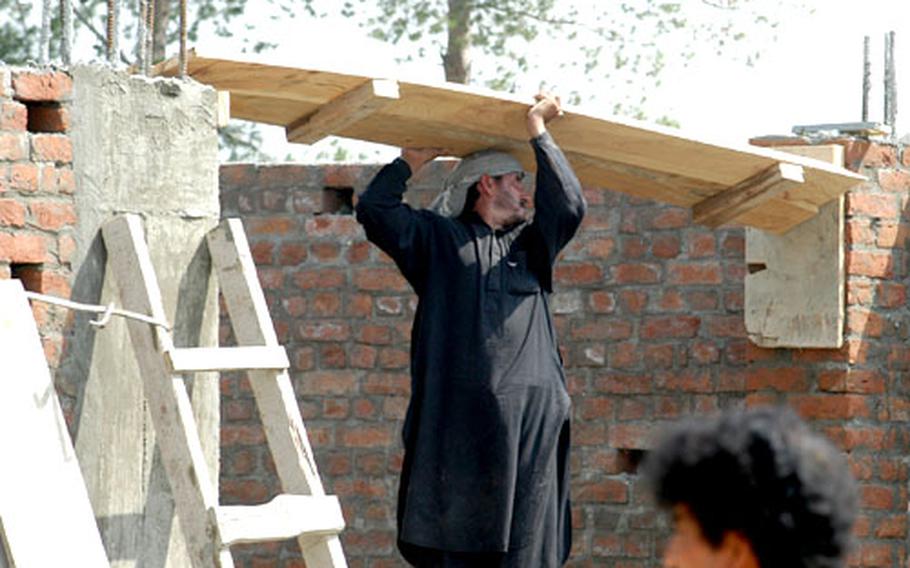 An Afghan laborer puts a roofing plank in place at the Mandozayi community center in eastern Afghanistan. (Bryan Mitchell / S&S) 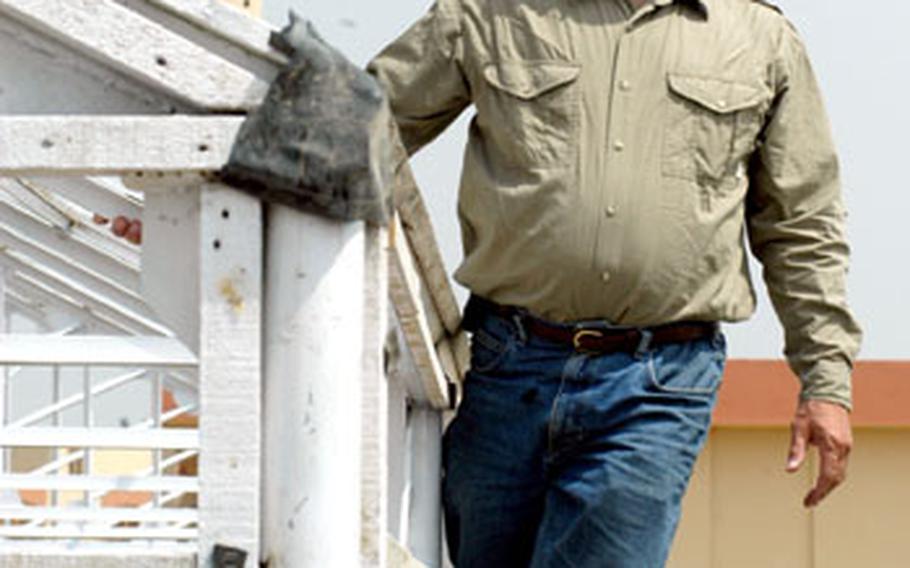 FORWARD OPERATING BASE CHAPMAN, Afghanistan &#8212; A partially completed bridge swept away in the rain, a community center with an inadequate wall and imperious police who seize a university campus for their barracks.

If only completing civil projects was as straightforward as toppling the Taliban.

Here on this outpost within mortar range of the Pakistan border, a team of about 100 troops is working alongside a small contingent of civilian experts to help local Afghans with projects designed to improve their lives.

That means funding a community center where locals can gather, constructing a bridge to connect two villages, and providing Khost University&#8217;s agriculture campus with three greenhouses for research and cultivation.

But as a recent morning full of inspections proves, it&#8217;s never that simple.

The morning starts with a drive through the edge of Khost, where troops point to a spot where a roadside bomb struck an American convoy two weeks earlier, to the village of Mandozayi. A half-mile down a gravel road alongside an obstetrics clinic and police station, a dozen locals toil under the ruthless Afghan summer sun, building a red-brick community center while using the most basic of tools.

Upon closer inspection, Butler, 60, of Kingsport, Tenn., finds a corner wall with a crack and places where mortar is in short supply. Still, he feels the structure is up to snuff.

Minutes later, after soldiers and sailors position their fleet of Humvees for security in a parched river bed, Butler inspects a bridge that will connect Mandozayi with the neighboring village. For now, shoeless children, men on tractors and women in full-body burqas ford the knee-deep river by foot and wheel.

Part of the bridge was lost after a strong rain. Rebuilding it is a project led by a Turkish contractor, the only foreigner leading a project in Khost province.

&#8220;They built the arches and a rock foundation and then laid some cobblestone-type foundation, and then a big flood came up before they got the bridge up and washed away the arches,&#8221; Butler says.

Frustrated American commanders wanted to abandon the bridge and allocate resources elsewhere, but the commander at Provincial Reconstruction Team Khost fought to keep it a priority.

Adams, 41, of Austin, Texas, leads a joint effort of soldiers, sailors and officials from a host of federal agencies and Afghan nationals working on 83 projects across the Khost province, which was home to two al-Qaida bases prior to the October 2001 invasion.

Today al-Qaida is far less prevalent, and the Taliban have been largely suppressed with a combination of civilian projects, aggressive counterinsurgency tactics and a bit of good luck, Adams says.

Adams is blessed with far more funds than his predecessors, spending $17 million this year compared with $6 million during the previous three years. He&#8217;s also dispatched civil affairs teams to hamlets in the countryside to live alongside the locals.

&#8220;Now six out of 10 [roadside bombs] are reported to us by the people. Sixty percent is significant. We win when they call us and say we have three trucks of Taliban rolling in.&#8221;

Yet there are still challenges, such as when a contingent of local cops commandeered the recently completed $64 million Khost University from the faculty, and the governor had to intervene to boot the officers off campus. Or the recent assassination attempt against the governor.

But suicide bombings have dropped from one a week to one a month in the past year, thanks mainly to locals who have turned against the Taliban. Adams attributes that to cooperation forged by projects like community centers, schools and wells.

&#8220;I do worry that we will be a victim of our own success, that the Taliban will reconstitute and come at us hard this fall,&#8221; he says.